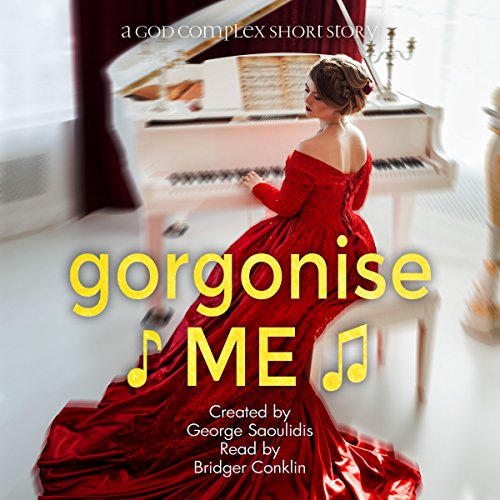 A story inspired by Medusa's sister and a piece of unplayable piano music.

To gorgonise: an old English word based on Greek. Means to have a paralysing effect on someone.

Taken to the extreme, as I always do.

Evryali is a music piece for solo piano that cannot physically be played, composed by Iannis Xenakis in 1973. That means the piano player has to choose which notes to play and which not to, resulting in a performance that transcends form and function.

Evryali is also a Gorgon. (Yes, Medusa’s sister.) She is noted for her petrifying gaze, of course, but also for her bellowing cries. Contrary to Medusa, who was a mortal that was cursed, Evryali was immortal.

Here is a dark story inspired by her.

What listeners say about Gorgonise Me

As always with these short stories by George Saoulidis, Gorgonise Me is beautifully written, words closing out like musical notes. But the story beneath the surface is one of cruel love.
The narration is excellent, velvety lush, beautifully delivered by Bridger Conklin.
Be intrigued, be amused (perhaps), be gorgonised.

An intriguing look at what could happen when love and devotion is taken but not returned. This short story really packs a punch and makes you think. It is on the dark side, but it’s presented very well.

The narrator did a great job of expressing the emotions and intentions of the author.

Gorgonise Me: God Complex Universe is written by George Saoulidis. The narration was provided by Bridger Conklin. This is a short story with a running time of 26 minutes but it was an amazing story.

This is a tale that is truly tragic. There is self-sacrifice, love, and loss. A Man marries a woman who is a gifted pianist, gives her all she desires to perform her masterpiece and earn the adoration she craves. Plus servants bonded to her with a piece of her above their heart. Once bonded, they are devoted to her and her music. The narration by Mr. Conklin was perfect for this audiobook. He gave each character a true voice that reflected them in the moment of the grip of the devotion to their Mistress. This was an excellent performance for such a short audiobook. The production value of this audiobook from Mythography Studios was of this highest quality. The entire performance was crisp and clear. This was a flawless production. I was given this free review copy audiobook at my request and have voluntarily left this review.

A tragic tale of devotion, love and sacrifice. What would you do if you literally carried a piece of someone’s heart and they did not love you back. This is the question posed by Gorgonise Me. Adding in some supernatural elements to create a spooky, somewhat futuristic setting, this story follows a devoted fans desire to please the one person that does not desire to please him.

It can also be seen as a satirical look at modern life and the things we spend so much time and money devoting ourselves to. Entertainment, technology and religion. In the end, we are left empty and only wanting more. Very powerful.

The Narration was done well. I would listen to other books narrated by him.

I requested a free review copy of this audiobook and I am leaving an honest and voluntary review.

This is of course a very short listen, so I was pleasantly surprised as to the depth the story manages to reach. It's interesting, captivating, with hints of horror but always from a distant, second-hand perspective; never blood & guts and never a jump-scare. But creepy nonetheless, in a drugged or hypnotized kind of way. As a listener you're looking through the same altered mind state at events as the MC. And of course again a subtle but very present re-imagining of Greek mythology, which I love about all of Saoulidis's stories.

Narration again very well done, love his voice and the way he narrates.

~ I was given this free review copy audiobook at my request and have voluntarily left this review. I was not required to write a positive review and this reflects my honest opinion of the work.

When I see something coming from Mythography studios I'm almost guaranteed to enjoy it, and this one was no different.

The story is somewhat futuristic, but also rather mystical in nature. A household of servants are given implants that will, ostensibly, echo the emotions of their master. That's technically true, but not the whole truth.

The story is told from the position of one of the head servants who is both subject to and fully aware of the manipulation he's being subjected to. It's hard reviewing without giving anything away, but it's a real thinker for sure.

I didn't really like the overly dramatic narrator, but once you get into the tale it becomes easier to ignore.

I was given this audiobook free of charge in exchange for my honest review. I thoroughly enjoyed it, and if you're a fan of what Mythography studios typically puts out, then you likely will too. It's only 26 mins, so give it a try!

This was a quick dark and creepy book of how you wanted someone’s love so much you’re willing to do anything and reminded me or the reverse of the kiss of sleeping beauty. I was given this free review copy audiobook at my request and have voluntarily left this review. Thank you