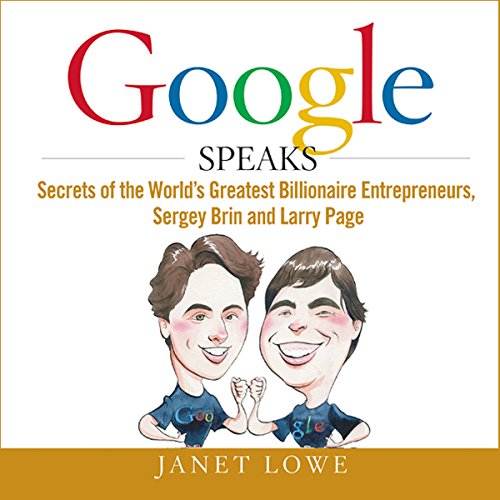 In many ways, Google is the prototype of a successful 21st-century company. It uses technology in new ways to make information universally accessible; promotes a corporate culture that encourages creativity among its employees; and takes its role as a corporate citizen very seriously, investing in green initiatives and developing the largest corporate foundation in the U.S.

Following in the footsteps of her best-selling Warren Buffett Speaks - written in a conversational style that successfully captures the essence of these business leaders - Janet Lowe reveals the amazing story behind one of the most important new companies of our time by exploring the people and philosophies that have made Google a global phenomenon in less than 15 years.

She offers an engaging look at how its founders transformed their vision of a better Internet search engine into a business colossus with about $16 billion in annual revenue. Lowe discusses the values that drive Brin and Page - both living fairly modest lives despite each having a net worth of over $15.9 billion - and details how they have created a culture that fosters fun, yet keeps Google at the forefront of technology through relentless R&D investments and imaginative partnerships with organizations such as NASA.

Examining Google's breakthrough business strategies, which transformed online advertising and changed the way we look at corporate responsibility and employee relations, we see why Google may be a harbinger of where corporate America is headed. Also addressed are controversies surrounding Google, such as copyright infringement, antitrust concerns, and personal privacy.

"It's not hard to see that Google is a phenomenal company...At Geico, we pay these guys a whole lot of money for this and that key word." (Warren Buffett)

Boring and information you could obtain by googling

Very much surface information and showing its ages now. Worst book I've listen too for a while

This came off like somebody reading web, magazine, and newspaper articles about Google. I certainly didn't pick up any secrets from the world's greatest entrepreneurs, Sergey Brin and Larry Page. I couldn't wait for it to be over but I did listen to the whole thing.

As others have brought out, this is book is a little haphazard in its delivery. Also, some minor points are oddly repeated numerous times.
I think these minor flaws are evidence of a book written while trying to keep up with the changes in technology and the company. I was concerned the book would be slanted toward Google, however I think it was a pretty fair assessment of the company.

Overall it was worth the time and credit, especially if you are interested in Google or in other technology companies.

Soooooooooo boring I could not finish the book, which almost never happens. The author is desperate for anything including the hot news that the main character attended a Halloween party dressed as a girl......plus a narrator that would put anyone to sleep....

Entertaining, but not fantastic. No regrets that I purchased it, it was enjoyable to listen.

Also liked the narrater Sean Pratt. Infact wud like to listen another book narrated by Sean Pratt