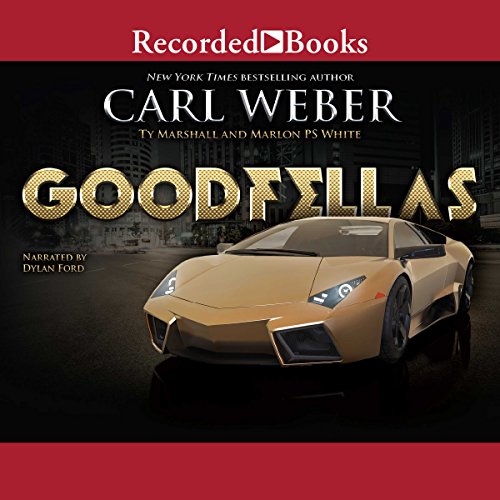 "Sibling Rivalry" by Carl Weber: They say the parent's sins always fall into the children's laps. Twins Kayden and Jayden Vincent have walked in their father's kingpin shadow as two princes fighting for the same throne since they were children. Now, finally at the age where the transition is inevitable, it seems as if the twins are going head-to-head when it comes to everything around them. What they don't know is that the crown they are fighting for comes with its own burdens - like a past the kingpin forgot to tell them about. It's a past that, if not dealt with, will leave both men without an empire to inherit.

"Love Seldom, Trust Never" by Ty Marshall: While attending his estranged father's funeral, East is approached by the legendary Ricardo Wheeler, who offers him the opportunity of a lifetime. Wheeler takes the young man under his wing, but when Wheeler's son and heir-in-waiting becomes jealous, his excessive ambition and quest for power lead to betrayal. A treacherous war is set in motion that will force the powerful legend to choose between his two sons. Anything built on a lie will eventually crumble. When no one and nothing are what they seem, who can you trust?

"The Bag Is In" by Marlon P.S. White: Slow grinding for years, Greedy and GiGi are ready to step up their game, with a thirst to be Detroit's king and queen of the trap. The struggle is real, but the payoff will be major. After cashing out their middleman up front, the couple's hood dream tragically turns into a nightmare. The middleman is popped, and the infamous Mexican pipeline is broken. Greedy and GiGi devise a seemingly flawless plan to not only recoup their invested cash, but to link up with one of the most notorious cartels across the border. What seems like sunshine quickly turns to rain, however, and chaos erupts.

What listeners say about Goodfellas

The book was just okay. The first story, Sibling Rivalry is forgettable at best. I just read the book and I can't remember what it was actually about. I do remember that it was the traditional good twin/ bad twin scenario. The second story was the best. I think Ty Marshall should develop the story into a full novel. East has the makings of a charismatic main character akin to Ethic from Ashley Antionette or even Carter Jones from The Cartel series. The last story was so contrived and anticlimactic, I was just annoyed. I've never read anything by Marlon PS White before. I hope that this isn't representative of what his writing is really like. He attempted to present two major storylines and reconcile them at the end, but it just ended up being a mess to me. I kept rewinding and listening again to figure out what was going on. Anyway....I didnt write all of this to discourage people , I really didn't, it was just okay. The way the narrator said the word , DICK, so dramatically every time made me burst out laughing. He gave DICKS as much emphasis as the main characters. 🤣🤣🤣

1st story - good but diminished after that

1st story was good and kept me listening. Not drawn out. Short, not that predictable and good overall.

2nd story - not my normal reading but still good. Surprising twist at the end. I’m ready for a sequel so I guess it left me wanting more.

3rd story - after all the drugs, sex, cartel related events I wasn’t up for the last story. Started with a dead body- I couldn’t do it. I didn’t want to listen to anymore. Yet, if that is your thing; you’ll love the 3 books.

terrible I can't believe I had to use 15 words

I DO OT BUY BOOKS TO HEAR ABOUT A THIRTEEN YEAR OLD BOY GETTING HIS FIRST PEACE OF ACTION THIS REALLY SURPRISED ME AND I WAS SO DISAPPOINTING IN CARL THE ONLY ONE WHO WANTS TO HEAR ABOUT THAT IS A PERVERT I HAVE A YEAR OLD SON I AM NOT ASKING ANY DETAILS SAME OLD THING DRUGS SEX STRIPPERS YAW GOTTA DO BETTER THAN THIS WRITE ABOUT SOMETHING ELSE SAME OLD STORY LINE.

I love Dylan Ford, that is why I bought the book. I didn't care for the stories. It was not what thought it would be.

3 stories, left the reader hanging. I expected more than I received. Disappointed. I will be returning the book.

I liked the first 2 stories more than the lst

I'm a huge fan of Carl Weber and this was my first read by Ty Marshall and Marlon P.S. White. I enjoyed Carl's and Ty's but I wasn't as enthralled by Marlon's as I would have liked to be. At any rate, there's enough crime, sex and blood to keep you entertained if this is what you like.

with out the narrator dylan ford this book would be absolute garbage. very slow read and the plot was a epic flop!

didnt like it horrible stories, expected more. really disappointed in the entire book. want a refund