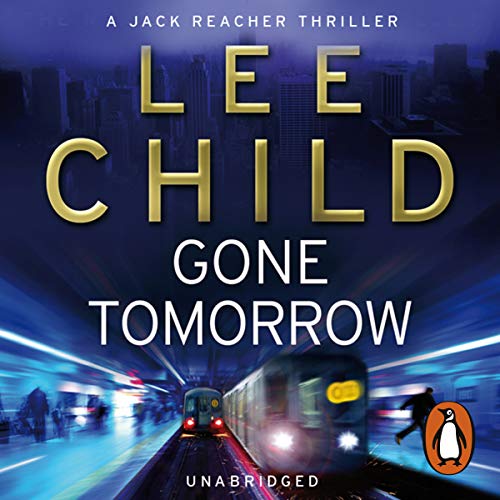 Suicide bombers are easy to spot. They give out all kinds of tell-tale signs. Mostly because they're nervous. By definition they're all first-timers.

Reacher knows the 12 giveaway signs to look out for. Riding the subway in New York at two o'clock in the morning, he becomes sharply aware: one by one, a fellow passenger ticks off every bulletpoint on his list.

What listeners say about Gone Tomorrow

Jack Reacher does it again.

A good story with Jack Reacher at his best. I would have preferred an unabridged version, but I thoroughly enjoyed it!

This needs to be unabridged

Too much is lost with writers such as Lee Childs when the book is abridged. Like another reviewer, I will be buying the paperback.

Shame about the length

This is the second Lee Child book only available abridged & I won't be buying it. Books of this nature which are heavy on description loose too much when cut down & spoil the story. I'll be buying the paperback! Audible should pull its finger out and get them unabridged.

Another great book by Lee Child - pity there isn't an unabridged issue.

Disappointed to find this book was not 13 hrs long as stated but only 4 hours long. Feel a bit short changed!

Not up to the usual standard.

Didn’t enjoy this as much. I normally really look forward to reading these- disappointing.
It was shorter than others and a bit predictable. Shame !

Disappointed by the length.

Good story, but was disappointed by the cut, so as a first experience of Mr Reacher, it could have been more.

Having seen the film "Jack Reacher" on a long haul flight, I thought I would give the audiobook a try, and I was not disappointed. The story is well read, and the story keeps the listener gripped. I have to say though that it probably helps if the listerner knows New York well, which I do not. I did enjoy the story though.

All Audiobooks should be this good.


I am self confessed Jack Reacher/Lee Childs fan. If you see those two names you are certain it will be a fantastic fast and action packed book. Probaly the best in this Genre

another great from lee child

another great book from lee child, those familier with child's Jack Reacher will love this, new readers will soon love this tough guy. read by kerry shale who is the best for this chariture. would prefer a less abridged version. hope audible re-do all childs books with kerry shale

Good, fast paced thriller. Well read, with a narrator who managed to make the different characters totally discernible. Unfortunately took the abridged version, which made the story slightly difficult to follow. Recommend the unabridged version instead!