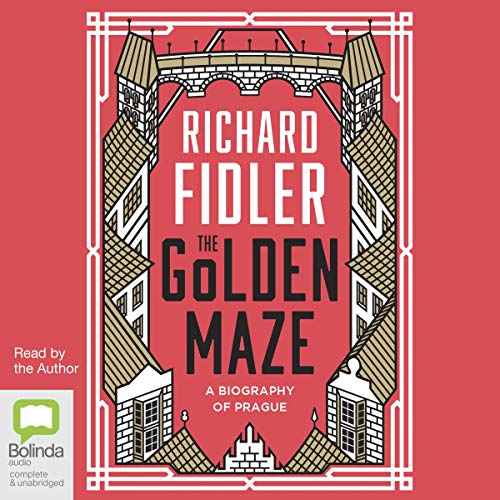 Beloved ABC broadcaster and best-selling author of Ghost Empire and Saga Land Richard Fidler is back with a personally curated history of the magical city that is Prague.

In 1989, Richard Fidler was living in London as part of the provocative Australian comedy trio The Doug Anthony All Stars when revolution broke out across Europe. Excited by this galvanising historic, human moment, he travelled to Prague, where a decrepit police state was being overthrown by crowds of ecstatic citizens. His experience of the Velvet Revolution never let go of him.

Thirty years later Fidler returns to Prague to uncover the glorious and grotesque history of Europe's most Instagrammed and uncanny city: a jumble of Gothic towers, baroque palaces and zigzag lanes that has survived plagues, pogroms, Nazi terror and Soviet tanks. Founded in the ninth century, Prague gave the world the golem, the robot and the world's biggest statue of Stalin, a behemoth that killed almost everyone who touched it.

Fidler tells the story of the reclusive emperor who brought the world's most brilliant minds to Prague Castle to uncover the occult secrets of the universe. He explores the Black Palace, the wartime headquarters of the Nazi SS, and he meets victims of the communist secret police. Reaching back into Prague's mythic past, he finds the city's founder, the pagan priestess Libussa who prophesised: I see a city whose glory will touch the stars.

Following the story of Prague from its origins in medieval darkness to its uncertain present, Fidler does what he does so well - curates an absolutely engaging and compelling history of a place. You will learn things you never knew, with a tour guide who is erudite, inquisitive and the best storyteller you could have as your companion.

"Fidler displays great charm in the telling of his tale, spicing it with delicious gossip." (New York Times Book Review)

"Fidler's story leaves its readers with a sense of faith in the renewing, illuminating, social powers of historical narrative." (Sydney Morning Herald)

What listeners say about Golden Maze