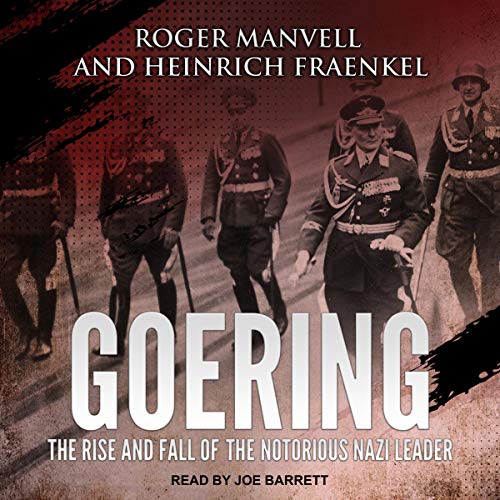 By: Roger Manvell,Heinrich Fraenkel
Narrated by: Joe Barrett
Try for £0.00

A penetrating biography of one of the most infamous members of the Nazi high command.

In Goering, Roger Manvell and Heinrich Fraenkel use firsthand testimonies and a variety of historical documents to tell the story of a monster lurking in Hitler's shadows. After rising through the ranks of the German army, Hermann Goering became Hitler's right hand man and was hand-picked to head the Luftwaffe, one of history's most feared fighting forces. As he rose in power, though, Goering became disillusioned and was eventually shunned from Hitler's inner circle. Alone at the end, he faced justice at the Nuremberg trials and was convicted of war crimes and crime against humanity. He committed suicide in prison before he could be hanged. In this book, Manvell and Fraenkel bring to life one of history's most complicated and hated characters.

What listeners say about Goering

Try to say the name Goering in the most American way you can think of, then multiply that by ten.
If there’s a name with “Von” in it, he’ll give it a totally weird “German “ sounding noise.
Once again a good story ruined by a useless narrator.

Great listening.... But nothing new.

If like myself your well into WW2 history, you wont be disappointed in this book. However there is nothing new in the telling of Goering's life. Nothing new in the historical documentary evidence. I think its almost recognised that everything has been well and truly dredged regarding this period of history, none the less, a good listen.

Very easy read. Not filled with insignificant points just the important ones. A must read for those interested in The Third Reich

The narration makes it hard to listen to and concentrate on the book, but I got through it.

This book was very informative about Goering . I've always wanted to know more about his life and this book answered all of my questions.

I'm not going to sum up Goering. If you're looking for books about the man, then you probably have a good understanding already of who he was. He was one of the first men to fire a machine gun out of an airplane (interesting), he became a Nazi (evil), and he blindly worshipped Hitler to the very end (unspeakably evil and unforgivable).

As a historical study, this book is well done. Though, I do question some of its facts - it claims Rommel shot himself when he actually took poison. I'm unsure how any historian goofs that up, but what do I know? Nevertheless, the stories told about Goering are fascinating, especially towards the end when it gets to the Nuremberg stuff. He was a real piece of work at Nuremberg.

Overall, if you're interested in a deep-dive on one of history's highest ranking Nazis, this book should be considered.

The narrator is ok.

Well written with very good narration. A little more about the outcome of his family later.in life

Interesting but not good performance

Interesting biography but performance was so frustrating. Words rolling together at a fast pace--too often 5-6 words in the middle of a sentence were completely lost in a roll of poor enunciation.

Not worth the time or money

This book doesn’t really add any new info to what most of us already know about Goering.

The book was ok, but it seemed really rushed, and the book discredits itself on two major issues.

While it acknowledges that Goering and Hitler themselves didn’t seem to know about the holocaust, and that there is no evidence that the Nazis themselves were responsible for the burning of the Reichstag building, the book gets the cause of death for both Hitler and Goering wrong.

The book also says that Goering swallowed some crystals that caused his death, when really he bit down on a cyanide capsule as well.

With that being said, who knows what else it got wrong?