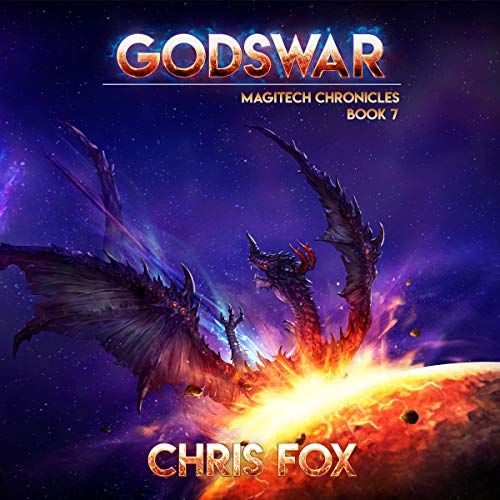 Nefarius has risen. She is implacable. Unstoppable. God after god is fallen and consumed, and each time the terrible dragon-goddess grows stronger.

Nebiat has stolen the Spellship, depriving Voria of its strength when she needs it most. But Nebiat's schemes have never been tested by someone like Talifax, and she will finally discover she's not as clever as she believes.

One possibility of victory remains. Aran, Nara, and Kazon discover their true purpose, left by the elder god Xal when he planned for his own demise. With this contingency they have one chance to oppose Nefarius. One chance to stop the goddess that will devour everything.

If they fail darkness wins, and our universe will be extinguished. Succeeding carries its own price, one Aran must choose for others to live.

What listeners say about Godswar

Outstanding Finish to the Series!!

In this the final chapter of the Magitech Chronicles all the final players come together to bring an end to the ‘Godswar’ one way or another.
Nefarious, fresh off the killing of Virkonna and Krox is flush with power, and more than that, she has worked out how to manipulate the humans into worshiping her, so that they will feed her even more power. To complete her treachery, she has taken control of the infrastructure, so that no one can get a message out, and only she can control the media.
On the other side, we have Voria and Frit, trying to wrap up the loose ends of Nebiat.
Aran and Nara have to raise Xul, so have sent Crewes, Rhea and Bord on another mission.
And this is where Fox excels with this sort of writing. The first two thirds of this book is about anticipation, preparation, and building up to the final battle that we all know is coming. Sure, there are some minor battles as the various Characters are trying to get Xul put together, rally the Demons to their cause, rally other Allies, or as Nefarious decimates lesser outposts on her way to the final confrontation.
However, all through this, Fox builds uses each and every one of his main Characters and the minor Characters to build this frenzy of anticipation for this final battle, and to be honest, you really have no idea who is going to win by the time you reach the final pages.
The lead in to the last section is utterly brilliant, we see the resurrection of a God, by some of our favourite Characters, and we see them elevate to new heights in this final book. The Character writing is just exceptional in this book, Fox has outdone himself in this final chapter. He has always created powerfully strong Character driven stories (Each of the Void Wraith books, and the previous 6 books leading up to this are prime examples), but this book sets a new bar.
And whilst we all know what this book is about, the story was pretty much written for us, Fox has provided so many twists and turns to get us there, that you still have no idea what is going to happen by the last pages. In fact (and no spoilers!!), as you are turning the final pages, he still manages to surprise you.
Adding to all of that, is some of the most outstanding combat scenes I have read. Chris Fox has written some brilliant stuff in the past, but again, he has saved his best work for this book. The fight scenes with each of several Major (and Minor) Characters are so incredibly detailed, and in-depth, blow by blow, that they leave you nearly passing out, because you find you have been holding your breath for so long. I lost sleep, was sneaking off at work, standing watching dinner cook, whatever I could to get another 10minutes of reading/listening time just to make sure I made it through to the end of some of the fight sequences.
This has been a wonderful series, combining Tech and Magic together to make some of the most amazing things, who doesn’t want a Sniper’s Rifle that shoots spells? Especially some of the spells that come out of this book? Man, when I was a cop, I would have killed for a set of the spell armour (*GRIN*), and these are just a couple of the incredible things that have come up in this series. Between that, the combat, the breathtaking range of species, Dragons, Demons, and other entities, the sensational ships, and again, just the extraordinary Characters, this is one of the best Sci-Fi series on the market today.
The Series was well worth reading before, but now, with Godswar – It is an Absolute Must Read!!!
As with the other books, Ryan Kennard Burke is just brilliant. His Narration is without flaw, as he provides exceptional voices for each of his characters, but more than that, he gives each of them their own individual personality, so that each time you hear the character, you hear an ‘individual’ person speak, with their own voice, and a distinct personality to it. Voria has a kind of superior tone, Frit has a rougher edge, but always sounds a bit timid, shy, Nebiat is devious, Aran is absolutely sure of himself, unless he is with Nara, and then you can hear the doubt in his voice. It is a truly brilliant Narrator that can convey this level of personality with each of his Characters to the listener (especially given that there are just so many characters in this story), and do it so well.
This is one of those books that the Narrator has really told the ‘Story’, and it is so much better as an Audiobook than being read. Make sure you get the Audiobook, it is just outstanding.

All I have to say is wow. That was an awesome finish to the series. I’m going to have to wait for the next series to kickoff. Not a single complaint!

This qhole series has been so amazing, every book builds the character's background and personality. with action and awesome wvents taking place, that builds up the plot in an marvelous way.....leaving you the reader always anticipating the next release date.

loved the entire series and can't wait for the spin offs!! keep them coming Mr.Fox!

A perfect successor to Dragonlance

I have been reading fantasy and science-fiction for 35 of my 40 years and in that time very few book series have come close to the Dragonlance Chronicles. Chris Fox is this generation's Weiss and Hickman. A great story that will now dwell beside Dragonlance, Pern, and Darkover on my bookshelf.

The out riders do it again

Loved the book, great pace and everyone got theirs. Loved the ending and glad to see some resolution to it all

A great end to a great series

Whether it's watching the various plans of ancient gods unfold and collide, mixing DnD magic with space tech, or seeing the story's most hated character finally get his comeuppance as the heroes get their well-earned rewards, this book will not leave you wanting for anything. In fact, I'm not sure if I want to start the next series right away or dive into the rpg; either way, I look forward to seeing more of this universe in the near future.

some of the elements are eye rolling, sure but the story is cohesive and nicely written. The characters were fleshed out and interesting. And the narrator deserves mad props. great paceing and so many characters that all had unique accents and speech traits and he nailed it!

This was a great way and a teasing way to end. I guess you truly can never get enough of a great story and even better characters.

A fitting end to an entertaining series

Chris Fox did a fine job closing most of the loose ends and hinted at a follow-on series that might address the one large one left largely unclear. I took one star away for the two incidents involving resurrections, one that involved transference of people lost in the past using time transposition and the other involving the reconstitution of a soul back into a mortal living form.

Ryan Kennard Burke's narrating performance was a joy to experience.