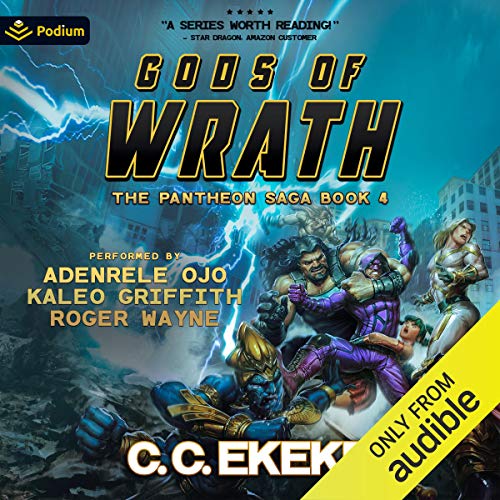 Not all heroes wear capes and uniforms...or see themselves becoming the villain.

As his sophomore year wraps up, Hugo Malalou - aka Aegis - is living his best life. He’s working with Lady Liberty to protect San Miguel, acing all his classes, and casually dating three insanely hot girls. Until one routine night patrol nearly gets him killed.

Before long, he’s pulled into a dangerous pursuit that isolates him from his friends, while his list of enemies keeps growing. And when he becomes the city’s last defense against an all-powerful adversary, he’ll find himself in the fight of his life.

Quinn partners with Hugo to expose Paxton-Brandt’s unethical research on superhumans. But the multinational’s scorched-earth response leaves everyone she loves caught in the blast radius. Can she prevail and topple Paxton-Brandt or is this another example of Too Big to Fail?

Meanwhile, Greyson begins his crusade to purge the world of superheroes. But his first target proves to be more than his match in power and purpose. And when a specter from his past makes their presence felt, Greyson’s mission might end before it even starts.

What listeners say about Gods of Wrath

It Gets Both Worse :( and Better :) Long Review

I have binged all four of these books, and have written a review on three. This past book has some of the similar critiques of the last two, only they are more problematic in this one. This book has more teenage "bedroom" stuff than the other three combined. It is almost as if the author has a fetish for mid-teen "action". It was almost to the point in this book that I quit reading because it sooooooo obfuscates some of the greater points about the story. I mean, how many times can you use the phrase or its equivalent "Hugo felt it in his loins". But the worst part about it is it minimizes what has made the series so great. Which is the diversity and inclusion of characters. It turns the other teenage girls into Hugo's harem, and makes them into one dimensional "mean girls" or "weak girls" but all the girls fawn and seek Hugo's bedroom prowess. So simultaneously you empower diverse POCs and sexual orientation via superhuman representation, then you diminish it via gender marginalization. This occurs also with the adult characters (Connie, Annie, Therese's one-dimensionality, etc.). The editors should catch this.

One twists was related to Quin's relationship and her coming to terms with her bi-sexuality. Ekeke did a great job with this long arc over time, making it feel organic. Yet, Ekeke near ruins it with one twist, near the end of this book.

So why then do I say this book gets better? The superhero fights are fantastic on pretty much all fronts, especially the penultimate fight. This book Ekeke really out does themself in that department. Outside of "the bedroom stuff" Ekeke also does a good job in Hugo's evolution as a hero. I am still scratching my head at Grayson's arc, which is really irrational on many fronts, but I see what Ekeke is trying to do with his long arc. I just wish it was a little more practical. So in total I downgraded this book from my 5 & 4 star ratings of the first three to only 3 stars for this one.

A step down from earlier books in the series.

While still a book about heroic action and sleazy villains, the interesting mysteries and clever, descriptive storytelling takes a back seat in this book to excessive action scenes and repetitive romance scenes that rarely add anything interesting to the story itself.

Indeed, even the author seems to periodically get bored with his own storytelling and just jump in time without warning or explanation. Instead, characters will just start confusingly referencing events that happened in a time jump and after a while the author will give a quick recap of what was missed. If you like to be told stories via quick recap instead of descriptive scenes, then I guess that's fine. But, at least a few of the time skipped scenes seem more interesting than the story that wasn't skipped, and I am left wishing the story was written in a more interesting, less distracting manner.

However, the performance of the three voice actors is top notch, and they do a great job making the story as interesting as it can possibly be...given the writing they have to work with.

Amazing story! I can't wait until book 5 comes out! C.C Ekeke is a great author.

can't wait for the next

great follow-up in a great series ..some excellent transition between stories and great fight scenes

PLEASE GET A NEW FEMALE VOICE ACTOR!!! No offense meant but her voice may very well be the most obnoxious sound I've ever heard in my life.

Even better than the earlier books

If you made it this far, you already know how enjoyable this series is! I have the next book cued up and ready to go!

There are some really good characters. All the teenage drama is too much. And too much to believe
. Too much for 16 year olds. Hugo has way too many relationships.

I really enjoy this series, watching Hugo become a hero with all his mistakes is just such a nice change.

if anyone is looking for a good read/listen check this out. The emotions of the character really bleed through well