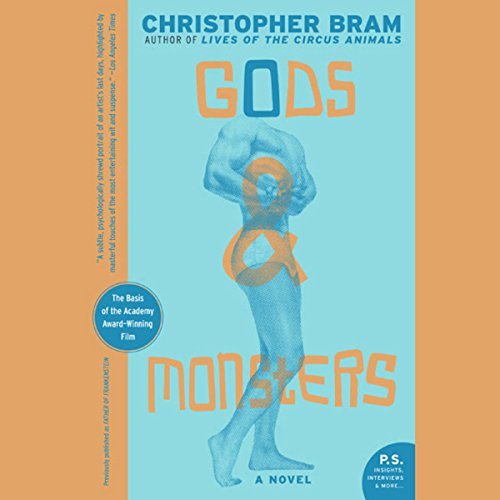 Gods And Monsters climaxes with a body floating face down in a swimming pool, that familiar symbol of the fatal lure and excess of Hollywood. The events that lead to this tragedy are a fugue-like journey through the memories of a forgotten master of cinema, as the story flits from James Whale’s Hollywood success, his grim upbringing in North England, and his deteriorating grasp on the present.

Christopher Bram’s book (originally titled Father of Frankenstein) is an elegant work in which the darker themes are counterbalanced with light, often comic touches, including cameos from Charles Laughton, Greta Garbo, and Tallulah Bankhead. But the motif at the heart of the story is how people make monsters of their past, and Bram links Whale’s iconic horror films to his long-buried background. He makes the claim for the films as shards of autobiography, psychological inner portraits, and this deliberate confusing of the films and fact is embedded into the narrative itself: Several chapters begin in the unmistakeable style of exterior-establishing script directions. ("Night. Rain. A hissing of wind, lightning strikes.")

Joe Barrett brings a seriousness to the experience which works in the story‘s favor — what could read as mannered or brittle on page becomes something a little more everyman. James Whale may well be the main character, but Barrett seems closer in temperament to Clayton Boone, the awkward gardener looking for “a great drama that would take him out of his dead-end life and justify his existence". An added bonus: Just at the very edge of Barrett’s voice is the familiar tone of movie-trailer voiceovers, that gravelly earnestness promising violent explosions, but tempered here by a gentler compassion, as Boone chooses not to be Whale’s monster who destroys his creator, but instead chooses the other path suggested by the book’s title. —Dafydd Phillips

Previously titled Father of Frankenstein, this acclaimed novel was the basis for the 1998 film starring Sir Ian McKellen, Lynn Redgrave, and Brendan Fraser. It journeys back to 1957 Los Angeles, where James Whale, the once-famous director of such classics as Frankenstein and Bride of Frankenstein, is living in retirement, haunted by his past. Rescuing him from his too-vivid imagination is his gardener, a handsome ex-marine. The friendship between these two very different men is sometimes tentative, sometimes touching, often dangerous - and always captivating.

"A touching fictional portrait of old Hollywood and of one of the curious geniuses who made it what it was.” ( All Things Considered)

What listeners say about Gods and Monsters

Christopher Bram has written a poignant, nostalgic and interior novel about James Whale, the Hollywood director of Frankenstein, The Bride of Frankenstein and The Old Dark House.

The novel is based on real-life figures but Bram invents a remarkable fiction around those facts. James Whale has just come out of the hospital after suffering a stroke that has jumbled his brain. The director is past his prime, living in reluctant retirement, but now there is a new hulk of a man, Clayton Boone, to do the yard work and to divert Whale from the tedium of sickness and old age.

Whale was one of the few out gay men in the Hollywood of the 1920s and '30s. Author Christopher Bram uses Whale's scrambled brain to great effect. The director's memory casts around in time: to his hardscrabble English childhood, the trenches of World War I and the sets of his greatest films. Boris Karloff, Elsa Lanchester and George Cukor flit in and out of the narrative. And yard man Boone bears more than a passing resemblance to Frankenstein's monster. The storylines of Whale's life blur together.

Whale and Boone are unlikely companions. The old man finagles meetings over cucumber sandwiches and paintings. The maid thinks she knows why and disapproves. But Whale, fragile and mixed-up though he is, knows how to play a role when it suits.

Narrator Joe Barrett is incredible. He does accents well and makes you feel like you're listening to a full-cast recording.

Movies marry literature and spawn a monster. Several in fact. This audio version is stellar too.