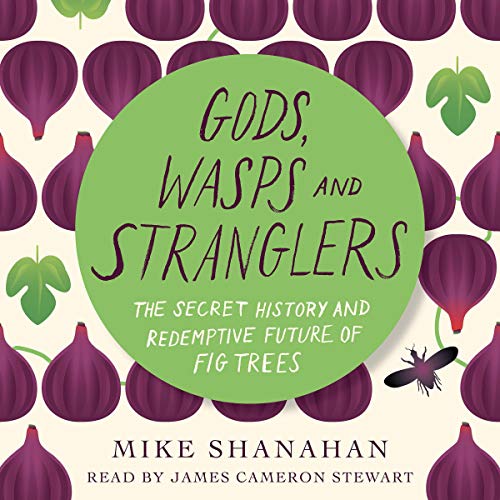 By: Mike Shanahan
Narrated by: James Cameron Stewart
Try for £0.00

They are trees of life and trees of knowledge. They are wish-fulfillers, rain forest royalty, more precious than gold. They are the fig trees, and they have affected humanity in profound but little-known ways. Gods, Wasps and Stranglers tells their amazing story. Fig trees fed our prehuman ancestors, influenced diverse cultures, and played key roles in the dawn of civilization. They feature in every major religion, starring alongside Adam and Eve, Krishna and Buddha, Jesus and Muhammad. This is no coincidence - fig trees are special. They evolved when giant dinosaurs still roamed and have been shaping our world ever since.

These trees intrigued Aristotle and amazed Alexander the Great. They were instrumental in Kenya's struggle for independence and helped restore life after Krakatoa's catastrophic eruption. Egypt's Pharaohs hoped to meet fig trees in the afterlife, and Queen Elizabeth II was asleep in one when she ascended the throne.

And all because 80 million years ago these trees cut a curious deal with some tiny wasps. Thanks to this deal, figs sustain more species of birds and mammals than any other trees, making them vital to rainforests. In a time of falling trees and rising temperatures, their story offers hope. Ultimately, it's a story about humanity's relationship with nature. The story of the fig trees stretches back tens of millions of years, but it is as relevant to our future as it is to our past.

What listeners say about Gods, Wasps and Stranglers

I am not against the mixing in of mythological anecdotes, but in places they came across rather dry; almost as though taken off a wikipedia article and just listed off.

I would otherwise have preferred to hear more about the technical aspects, practical uses, or ecological roles of this species.

Even though the performance was rather dry, I found this book rather short. Had it been shorter, I think it might do well as a long form botanical article somewhere and to be fair I am sure there is more to the book itself than just the text, but as an audiobook, I couldn't help but wish there was more substance here.

You will forever look at fig trees and wasps differently. What a wonderful world!! highly recommend

It gets better as it goes

The opening chapters are a bit overly concerned with people who study figs, rather than with figs themselves. Stick with it--the book becomes quite illuminating in the middle

intriguing ideas for cross-breeding hi-tech to elevate bio and eco woohoo [near end] great narrative with personal interactions and imaginative telling of critter-thoughts are highly entertaining. i may write poems on *thoughts of trees* oh yeah!