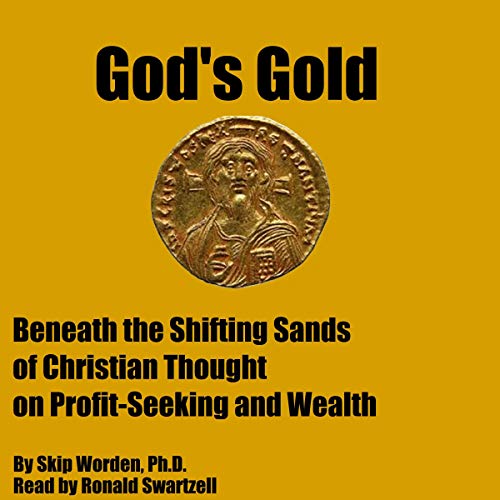 Dr. Worden carefully traces the historical shift through the centuries of Christianity and through the Reformation on how profit-seeking and wealth are assumed to be related to the sin of greed. In short, making and accumulating money was thought by most major theologians for centuries to indicate the presence of greed, the love of more and more. The uncoupling of greed from earthly treasure began to take hold only with Aquinas amid novel pressures from the commercial revolution. The uncoupling, which Worden calls the "pro-wealth paradigm", was complete a century before the Protestant Reformation - hence before the famed Protestant work-ethic.

Rather than viewing the Reformation generally as pro-wealth, Worden finds indications of the Reformers pressing the brakes, albeit to various extents, to keep the then-dominant pro-wealth position from lapsing into outright greed as being acceptable within Christianity. Even as early as Augustine, when the anti-wealth stance was still dominant, the push-back from going too far in the pro-wealth direction involved the now-extinct theory of justice as love and benevolence.

Worden takes the Baptist John D. Rockefeller, the self-described "Christ-figure" at the helm of the Standard Oil monopoly, as a test case of the Reformers' success. The insightful listener may ponder whether the Prosperity Gospel in the 20th century can be taken as a verdict on the reformers' brakes.

In the final chapter, Worden puts forward an explanation to account at least in part for the extraordinary theological and ethical distance between the anti-wealth, proverbial camel, which cannot get through the eye of the needle, and the pro-wealth assumption in the Renaissance that riches are necessary for the Christian virtue of munificence to be exercised. Worden looks at the core of Christian theology, specifically at how the doctrine of the Incarnation has been understood historically (and today). He suggests that a pro-wealth bias goes along with the doctrine as it has been understood.

To fortify Christianity from lapsing into accepting greed through profit-seeking and wealth, Worden presents two options - one being radical and the other more reform-oriented. Interestingly, Worden does not attempt to resurrect the extinct theory of justice that some of the principal anti-wealth theologians had in their tool kits.

What listeners say about God's Gold