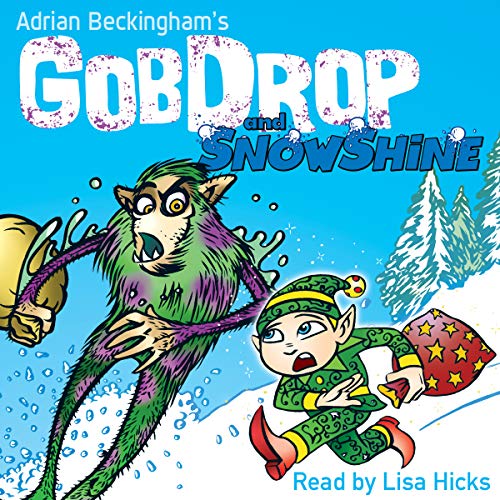 A Christmas tale set in Santa’s kingdom, told twice in different ways by two very different storytellers. The first is SnowShine, Santa's Smallest Elf. The second is GobDrop, the…but who really knows who GobDrop is? SnowShine has heard of him from the spooky fireside tales told by bigger elves - but when SnowShine gets lost it is GobDrop who finds him.

Carried in an old sack full of fish bones, the tiny elf enters GobDrop’s lair to discover a hidden kingdom below the snowy mountains. With a host of fabulous critters found nowhere else, and many an adventure, what must SnowShine do to save not only himself but Christmas too? Where did Santa’s magical Bag of Christmas Songs disappear to? Are all those terrible tales elves tell about GobDrop actually true? Did he really steal The Naughty List? Will the little elf save GobDrop when he falls into a tangle? This is an enchanting tale about the pitfalls of gossip, where we discover the power of being small.

What listeners say about GobDrop and Snowshine

This story is full of imagination, amazing creatures, adventure and positive lessons about life in general. Highly recommended for young children. Adults will love it too.

Amazing listen for bedtimes for my little ones!!

A great story line with lots of exciting things going on to keep my kids interested the whole time. They want to listen again and again!!

I want to write this story a review because it is told with a sensitivity towards young listeners. This shows the author is very experienced with small children and how to use stories to make learning positive morals fun!

This is an inspired story brilliantly told by Adrian Beckingham. I can't wait for more of his many stories, which he's toured aa live storytelling shows for decades, to come online as audiobooks.

Enchanting. The smallest of all elves learns to trust in the power of being small, and to find good friends in the most unexpected of places. My little ones loved all the characters especially the magical creatures living under the snowy mountains. This story has some subtle extra layers for adults to nod away to knowingly. Kids while both love the story AND learn more about kindness and respect.

A STORY WITH PROMISE.

This is a great story for all those little brothers and sisters who get fed up of hearing they're 'too small' to do this and that by older siblings. SnowShine gets told that all the time, it doesn't hinder him from being our saviour in the end of this story, and getting a special reward. Heart warming.

This story holds Christmas magic for little children but also has elves trying to turn money invisible to halt human greed and inequality. A smiling money-loving Santa who makes and breaks his own rules banishes the only elf willing to 'ElfInvisible' money against Santa's wishes.

A brilliantly clever Christmas story, this is operating on multiple levels. It's a story about a tiny elf called Snowshine who is always told by bigger elves that he's too small to help with making toys. He decides to climb a mountaintop so he can be taller than anyone (so sweet!) but gets lost. When he is found it is by the goblin GobDrop who all the big elves tell spooky stories about. SnowShine learns there is a different side to the goblin - who actually isn't a goblin at all but something entirely the opposite. Adrian Beckingham always writes stories that help built a better world and which live inside the reader/listener after they are heard. That's quite a magic touch these days. The narrator sounds like a friendly grandma, ideal for this age group!

We had so many audiobooks and films to get through over December that we didn't get round to this one, but I'm glad we did because it's great.

Storytelling at its best. The author weaves a world of wonders which leaves this grown up convinced that magic may just be real after all! A story to cherish. Ideal for little ones.

Great lessons for young listeners. Like life's problems are more like puzzles, that CAN be solved. This story has grown up motivational lessons but perfectly pitched for kids. The author really cares about the effect his story has on listeners, great job author Adrian Beckingham. It's pure magic!!!

I'm a natural Scrooge. The thing is I dislike the blatant commercialism of Santa. To me he's so Coca-Cola. But this story won me over when I listened to it with my children. Santa was painted nice and jolly but also rather bossy. He likes money a lot. The story also makes the point that for many children Santa IS the most tangible form of real magic in their lives who deposits presents unseen at night - and when the whistle blows and they realise Santa's a fake, they in one clean sweep go on to believe all magic is fake. This story let's children believe in a very human, magical Father Christmas while also introducing lots of great creatures and wonderful morals which small children can relate to. It keeps magic alive in young hearts and old.

The author does a fantastic job of creating a truly magical kingdom filled with amazingly imaginative creatures. There are perilous/exciting problems for the little elf Snowshine to solve if he is going to save Christmas. Adults will enjoy the more mature reflections on the society's problems which will bypass younger listeners but make us grown ups feel this is a very special children's book which has so much goodness to offer.