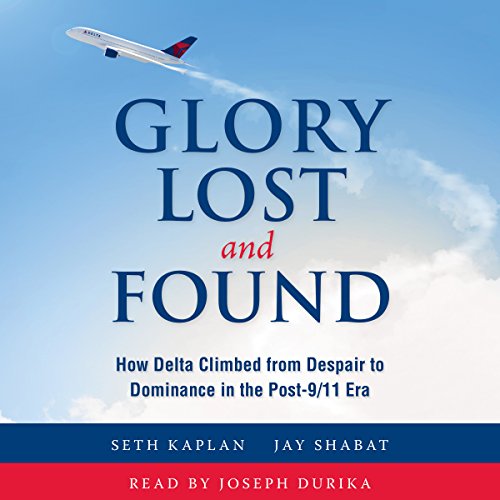 How Delta Climbed from Despair to Dominance in the Post-9/11 Era
By: Seth Kaplan, Jay Shabat
Narrated by: Joseph Durika
Length: 25 hrs and 53 mins
Categories: History, 21st Century
5 out of 5 stars 5.0 (2 ratings)

"When the history book is written on the restructuring of this industry, Delta will be the greatest turnaround story in it." - Delta CEO Gerald Grinstein, December 19, 2006

Its reputation was now as tattered as the interiors of its airplanes. Delta Air Lines, on September 14, 2005, was nothing like the world-beating company it had been just five years earlier, let alone decades before that. On this day, Delta found itself surrounded by lawyers, dejectedly filing for bankruptcy. Few believed it could ever reclaim its perch atop the US airline industry.

But it did. Glory Lost and Found: How Delta Climbed from Despair to Dominance in the Post-9/11 Era tells the story of Delta's dramatic tumble into bankruptcy and how it climbed its way back to pre-eminence despite hurricane-force headwinds: high fuel prices, a hostile takeover bid, relentless competition, economic meltdowns, and geopolitical shocks.

This book stems from a decade of research and countless interviews by Airline Weekly's Seth Kaplan and Jay Shabat. It's a profile in leadership: Delta became not only the greatest turnaround story in its own industry but also one of the greatest in the history of corporate America. Delta did the unimaginable by simultaneously resurrecting its finances and the spirits of its employees and customers. And while redefining itself, Delta also redefined an industry.

The book does a great job to clearly lay out the industry's changing environments and economics is the post 9/11 era. A great look at the behind the scenes decision making process, and exceptional insight.

Check out the podcast also.

Most satisfying random book I have ever picked up.

I am almost positive that I was drunk when I use my free credit to pick up this book.

So happy I did.

I have always had an interest in the modern airline industry and I can tell you that this book has quenched my thirst. It is not a book about the life of a Delta pilot or flight attendant, it is purely about the business side of things. obviously the focus of this novel is the airline industry as a whole in the early 2000s, which was most certainly a tumultuous time for the industry. Delta maybe the focus, but they do a fantastic job at looking beyond to other airlines which, and how Delta reacted to them, in order to tie in well to explain the global situation. If you have an interest in the business side of the aviation industry (both good and bad) I would recommend you pick it up.

A Must-listen for aviation enthusiasts!

very informative book, telling the story of the airlines industry in the US in general, and obviously more specifically on Delta from the early 1900's till 2014. i learned alot from this book about airlines economics and i highly recommend this book for any other AvGeek!

Great stuff for any airline or avgeek. Narration a bit choppy at times but nothing major

What does Joseph Durika bring to the story that you wouldn’t experience if you just read the book?

Great powerful narration for this subject matter. Kept me interested and intrigued with the complexity of the airline industry.

This book was so interesting I love planes and the thought of flying and this book really helps me understand what airlines really go through.

For Aviation Enthusiasts & the Business Industry

This was a very interesting look at the Company of Delta Airlines and a glimpse into the world of aviation in the post-9/11 era. Delta went from being at the top of the industry to the bottom of the barrel. However, this book describes how Delta scraped its way back to the top again.

My only real complaint about this book was the length. Even though I can't really think of any parts I would cut out, it did seem to be a bit on the long side. Having said that, I still thought it was very good. I had no idea half of the things in the book had even happened. And that is coming from someone who frequently flies on delta...
It was a great insight into the business world, the aviation industry, business practices, and the company of Delta Airlines.

Aviation enthusiasts will probably like this look at the company and information about the aviation industry. I think it would also be great for business students and those in the business industry. There are a lot of great business tips and information that I picked up that I would really never have thought about.

The narration was very good and I was impressed with the overall audio product. I look forward to hearing the narrator in his next audio performance.

10 of 51 people found this review helpful