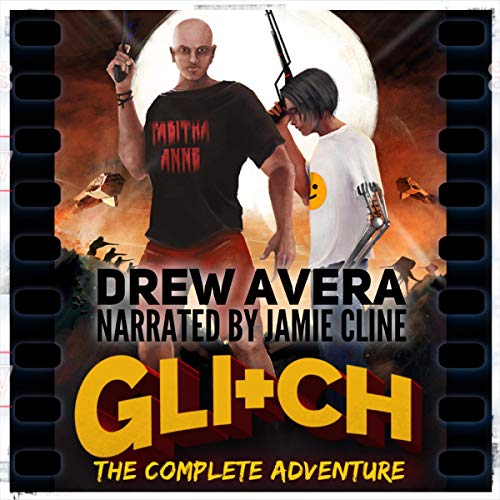 From the pages of the Pew! Pew! anthologies comes the complete adventures of Ben and his “friend” Chip, for the first time in a single, full-length novel format.

Just when Ben's contemplating whether or not he can use his robotic arm to strangle himself, he sees an ad promoting a new mining colony on Europa. A new life, good pay, and respect await him if he can just get there from Mars. The hot girl in the ad may have helped, too.

But space isn't a place for the weak, or the terminally unlucky, and when calamity strikes right out of the gate, Ben starts to think getting to Europa may take a farking miracle.

The Glitchover: After a devastatingly crushing, utterly suicidal, incredibly stupid trip to Europa, Ben returns to Earth embarrassed and defeated. But Earth isn’t the home he left behind. In orbit, a mass of darkness looms threateningly, and it is the only thing standing between Ben and surviving.

Running out of food on his ship, the Shistain, becomes the least of his problems as he grows ill eating tainted Vienna sausages only to discover that aliens have invaded the planet and it is up to Ben to save the world.

With his first mate Chip, a gay sex robot, he rushes toward Earth between hellish bouts with nausea and crippling hallucinations. In order to survive the ordeal, Ben must put his life in the hands of an android struggling with a corrupt software update that makes him hornier than a 14-year-old boy at cheerleader camp.

What could go wrong? For Ben, potentially everything.

Glitches Wild: With Lady Luck on his side, Ben doesn’t need any enemies. In a game of high stakes, he puts in all on the line, and probably loses.

They said he was lucky to be alive, that surviving his perilous journey and ultimate crash was a blessing in disguise. Ben isn’t one to agree, though, as he tries to up his “reward” in order to facilitate repairs to his ship, the Shistain, in a poker match against Buck Rodgers, the richest man in West Virginia. Ben soon discovers that poker isn’t his game as he loses his ass in more ways than one. But maybe there’s a silver lining to being the unluckiest man on Earth. Or maybe that’s the lie he holds on to to help him sleep at night. Either way, with Lady Luck on his side, Ben doesn’t need any enemies.

What listeners say about Glitch - The Complete Adventure