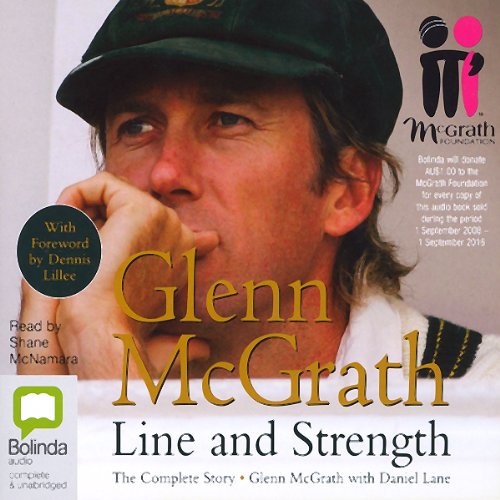 By: Glenn McGrath,Daniel Lane
Narrated by: Shane McNamara
Try for £0.00

"His is a great story... through perseverance and self-belief he played for Australia and became one of the great bowlers." - Steve Waugh

Glenn McGrath is one of the most highly regarded fast-medium pace bowlers in cricketing history, and was a leading contributor to Australia's domination of world cricket from the mid-1990s to 2007. He holds the world record for Test wickets by a fast bowler.

McGrath retired from Test cricket after the fifth Ashes Test in Sydney 2007, while the World Cup that year marked the end of his one-day career. McGrath was named One Day International Player of the Year and Wisden Cricketeer of the year on more than one occasion.

Glenn McGrath's achievements off the field are just as admirable. With his wife, Jane, he established the McGrath Foundation, a major fundraiser and supporter of women with breast cancer. He supported Jane through her own 11-year battle with breast cancer that sadly ended in June 2008.

Glenn McGrath: Line and Strength is more than just a sporting biography and will have broad appeal to men and women. Donations can be made to the McGrath Foundation at any branch of the National Australia Bank or at www.mcgrathfoundation.com.au

What listeners say about Glenn McGrath

nice spin on a fast bowler

should of had a female orator for janes voice.amateurish .very good on the rest.nice tone.

The book is very poorly written and the chronology of the whole story is all over the place. This autobiography is told in a third person with quotes from Mcgrath and other cricketers placed all along in the book. Book focuses on way too much on personal milestones. For e.g. - there is one big whole chapter on his 61 run innings against New Zealand while all the world cups are covered together at the end in half a chapter. You would expect him to talk a lot more about 2001/2004 india series or 2005 ashes loss or 2007 ashes win, but nope - all these series were just mentioned in the passing without any details. But he did not forget to mention his 7/15 against Namibia multiple times. Sometimes he'd begin talking about a series from third test onward because that's when he might have taken 5 wickets. This book does make for a good audio book because way too many statistics are mentioned and the narrator just reads them and the listener has no way to keep up with that. He makes sure that you know that he mentions that he a batsman out 3 times in a 5 test series, which according to him, is a great personal achievement. He barely mentions his relations with his team mates, or how is the team or individual prepares before the series. With regards to sledging he seems really entitled because as per him the world should cut him some slack because he is going to personal issues. Also talks about the delusional "line" that he draws when it comes to sledging.
The good part about the book was his relation with his wife Jane and her battle with cancer. That part is really well written, very emotional and listener can feel the struggle the family must have gone through. You can clearly understand the strength of his character when he describes his relation with Jane. I loved that part of the story
In summary, its a poorly written book, focuses on personal milestones, chronology is messed up. I would not recommend.

Glenn McGrath certainly has a great story to tell. He was arguably the world's best fast bowler, part of a storied, record-breaking cricket team and has lived through personal heartache and tragedy. More than enough for a great book. This particular book falls short because it tells this story so poorly. The chapters don't see to connect or have been written in consecutive order. The same anecdote is repeated in several chapters. The chapter that focuses on McGrath's relationships with his famous teammates- Gilchrist, Warne et al consists of tiny blurbs that say little more than: "he's a great guy". Finally, there is a lot of what the Aussies call "whinging" and score-settling. A whole early chapter that tries to explain and contextualize McGrath's love of hunting big game. A chapter devoted to McGrath's famous sledges and how he was "misunderstood." This is very much a celebrity biography- extremely one-sided

McGrath is undoubtedly a champion and deserves to have his story with depth and balance. This isn't really it. This book is only worth reading until a better one comes along.

It's a great book for any cricket fan, and I'm a Limey!! Well written and read, a compelling story of a true legend of the game.