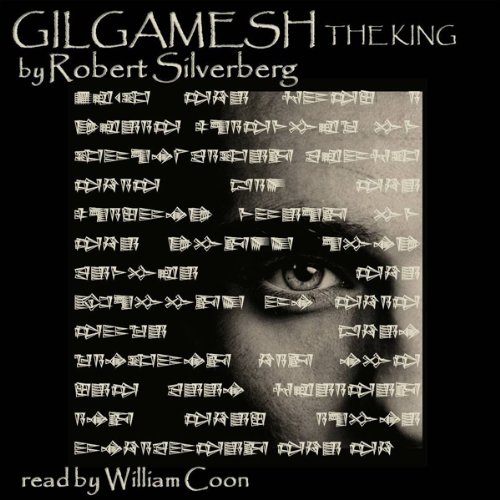 By: Robert Silverberg
Narrated by: William Coon
Try for £0.00

We're used to hearing about the latest tell-all memoir from one of today's sports figures, political insiders, or celebrity wannabes. But what if we discovered that one of history's greatest heroes had written his life story? That's the premise behind Robert Silverberg's amazing novel Gilgamesh the King.

The journey begins when six-year-old Gilgamesh's father dies. As he grows to manhood and eventually ascends to the throne, he faces many challenges along the way: political intrigue, war, the burden of leadership. But none are as difficult as his intense internal struggles against loneliness and his own mortality. Weaving together historical data, the Epic of Gilgamesh, and his own fertile imagination, Silverberg creates a rich and compassionate portrait of a man who lived about 2500 B.C.

"Fantasy, myth and ancient history interweave seamlessly in this powerful retelling of the epic of Gilgamesh…. Silverberg extends his mastery of the fantasy genre to the re-creation of the magic and mystery of ancient Sumer, uncovering the deep human truths that lie beneath the legend. ( Library Journal)

What listeners say about Gilgamesh the King

great story made modern and understandable. good read, may want to listen again and again.

a beautifully put together book all of different sources to complete one amazing autobiography type feel to this ancient story. Gilgamesh is and always will be one of the best Tales to come from Sumer and related areas. I have been blown away by this book!

This reads like something Mary Renault would write and she would do a better job.

The story is based on probably the oldest known story ever written. That alone makes it interesting. It is the story of a King from his childhood to late adulthood. Like all Silverberg books the prose is good. RS is one of the more talented writers around. It is written in first person by the King. As a youth he is confused over all the religious rituals and little is done to explain them to him. He learns as he goes. He grows up in the story and he becomes what he thinks is nearly a God. He is big and strong and he sleeps with several women a night (It's good to be the King).

Though there are lots of demons and such mentioned in the story, we see through his adventures how these are just how they explain anything they do not understand. We also see how Kings do not have all the power as they must deal with the priests and the priestess and what the people expect. Though the main character thinks he is a God, he is very human in his thoughts and even though I did not like the main character, I have no doubt this was what he was like in real life and how I would probably be under the same circumstances.

I gave this 3 stars, some four and five star RS books would be: AT Winter's End, The Word Inside and Downward To Earth.

Who's idea was this narrator?

I'm a fan of Robert Silverberg. Ok, this is not his best offering, but not bad, particularly if you like the original epic. But the choice of narrator? This is Gilgamesh of Uruk, part god, mightiest of men. The narrator sounds like a nervous student teacher. Normally it wouldn't bother me, but it is so incongruous with the narrative that its distracting.

The worst narration I have ever heard

When this book started I genuinely thought that they were using a computer generated voice initially and the narration did not improve. I listened to this with my daughter for school. The narration is so glad and unexpressive that it seems like even the narrator is tired of this audio book. We made it through but even my partner who was only in the room occasionally while it was playing felt like it was torture. The entire house was relieved when it was over.

The metaphorical transition of man from wild to urban projected onto Gilgamesh and Enkido, embraced in brotherly love for the nakedness, untamed wild man from the bush, but that lives in each man's chest. A hero's journey from young prodige to wondering the world looking for immortality. Realizing this life is the one to live.
Set in the first walled cities in Mesopotamia, portrays the sociocultural word of Inana at turning point in history, grieving the loss of the wild, and the threat from other cities. A story that evert young man must read.

Fans of Majipoor will enjoy the parallels. Silverberg fleshes out the ancient story skillfully and honorably. Narrator's boyish voice works in parts but seems totally off character in others. I wish Stefan Rudnicki had read it.

Although there’s nothing mind blowing about it, it is an enjoyable read and I reckon a good thinking exercise for the author to imagine how it really might have gone down...
They say that this is the oldest story in the world. Wonder what happened in real life, if anything. Reckon the telephone game really blurs history.
I enjoyed the narrator. Monotone. Sounded bored. Yet somehow that was enjoyable. Not sure how that works but it did for me...
I particularly enjoyed the Humbaba explanation.
Although I’m rating this fairly low, I think if you’re interested in the material it’s completely worth it and quite fun; I just see a lot of potential for something more, especially given the importance of the tale.

You need to now what will you be listening to

Terrible narration kept me from getting far

Really. The narration is awful. In an odd way. The breathy, whimsical, "poetry reading" sort of way the narrator read was not only annoying, but totally distracting from what might have been a very good story. The man had a kind of high pitched voice and took a really outlandish approach to his reading. The author has some great works out there, and the original epic of Gilgamesh can be a very cool story too If you understand the contextual undercurrent and popular innuendos and story telling styles of the times in which it was written. Just couldn't get through more than a couple chapters with this narrator though. Not good.