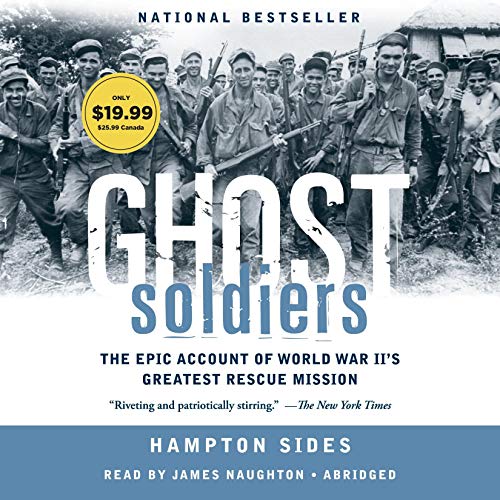 Before listening to Ghost Soldiers, I must admit I hadn't heard of the harrowing rescue of U.S. and British POWs from the Cabanatuan camp in the Philippines, following the Bataan Death March. In fact, I'm not much of a WWII buff, but Hampton Sides' detailed descriptions, drawn from survivors both of the camp and of the elite U.S. Army 6th Ranger Battalion, were extremely compelling. Once the U.S. soldiers and Filipino guerrillas infiltrated the POW camp, they had to move 500 prisoners - many of whom were extremely sick after three years of tropical conditions and limited access to medicine - 30 miles to safety, avoiding thousands of Japanese soldiers encamped around them. Ghost Soldiers is one of the best accounts of heroism I have ever heard. (Kerry, Producer of Original Programming)

A tense, powerful, grand account of one of the most daring exploits of World War II.

On January 28, 1945, 121 hand-selected troops from the elite US Army 6th Ranger Battalion slipped behind enemy lines in the Philippines. Their mission: March thirty miles in an attempt to rescue 513 American and British POWs who had spent three years in a surreally hellish camp near the city of Cabanatuan. The prisoners included the last survivors of the Bataan Death March left in the camp, and their extraordinary will to live might soon count for nothing - elsewhere in the Philippines, the Japanese Army had already executed American prisoners as it retreated from the advancing US Army. As the Rangers stealthily moved through enemy-occupied territory, they learned that Cabanatuan had become a major transshipment point for the Japanese retreat, and instead of facing the few dozen prison guards, they could possibly confront as many as 8,000 battle-hardened enemy troops.

Hampton Sides' vivid minute-by-minute narration of the raid and his chronicle of the prisoners' wrenching experiences are masterful. But Ghost Soldiers is far more than a thrilling battle saga. Hampton Sides explores the mystery of human behavior under extreme duress - the resilience of the prisoners, who defied the Japanese authorities even as they endured starvation, tropical diseases, and unspeakable tortures; the violent cultural clashes with Japanese guards and soldiers steeped in the warrior ethic of Bushido; the remarkable heroism of the Rangers and Filipino guerrillas; the complex motivations of the US high command, some of whom could justly be charged with abandoning the men of Bataan in 1942; and the nearly suicidal bravado of several spies, including priests and a cabaret owner, who risked their lives to help the prisoners during their long ordeal.

At once a gripping depiction of men at war and a compelling story of redemption, Ghost Soldiers joins such landmark books as Flags of Our Fathers, The Greatest Generation, The Rape of Nanking, and D-Day in preserving the legacy of World War II for future generations.

"[It] took me on a queasy journey deep into the realm of pure evil - then rescued me in a blaze of heroics and righteous vengeance. There's grief, despair, and terror here, but there's also adventure, courage, and joy. (Erik Larson, author Isaac's Storm)

What listeners say about Ghost Soldiers

Not the full book but a great story

I really enjoyed the original book but I was disappointed that the audio version was abridged. Obviously it includes the main action and is worth a listen but go for the book for the extra details.

Some books are interesting, others engrossing and other's tell stories sure to be remembered for quite some time. This book falls into all three categories. What a profoundly moving book! Excellent narration. Learned a lot about WWII at the same time!

Why hasn't Hampton Sides written more? After hearing this book I amazed by his writing talent. His talent reminds me of Barbara Tuchman (whose books should be on audible.com!) . And what an awful ordeal these heroes had to endure. In spite of the subject, this book should have much wider appeal for its brilliant description of humanity and evil in war. I look forward to more material from this author.

If you are looking for a "book" that will take you to both extremes of the human capabilities (humane v. merciless) then this book will fit the bill. The story demonstrates both human courage and evil from one chapter to the next. Further demostrates that the greatest generation is indeed great.

This is an excellent story of character, courage, and heroism. I'm not a fan of war stories, but this book isn't about war, it's about people. Hampton Sides writes from the perspective of individuals, and doesn't allow the tale to get overtaken by times, dates, or tactics. The result is an absorbing, very human account of a remarkable real-life event in history.

I would certainly recommend this audiobook but would encourage an outright purchase of the book. The audio version was condensed and missed some of the drama and suspense that the full version gives.

It truly captured the pain, anguish, drama and risk of the mission and the personalities of those that lived it. You can feel the oppressiveness of the jungle, the haunting hopelessness of the prisoners and the elation of the rescue.

Mr. Naughton gave a superb rendition of the story. His emotional inflections made the story come alive and allowed the listener to actually experience the drama.

The brutality that the prisoners endured, the mindless, senseless treatment by the capturing forces and the despair that they must have felt made the story that much more inspiring. War is hell.

I recommend not buying this because he skips paragraphs. I repeatedly got lost until I recognized he was skipping.

This is one of the first books I listened to on Audio that wasn't a personal development book.I've read a number of other military books, wasn't sure how I'd go listening to one, but it was pretty good... brilliantly written / narrated, the author gives you every detail of what it is like to be a POW for so many years... it's sad and horrific in so many ways, but it's a part of history we all should know about.

This was an amazing true story. Great detail by the author, and I felt I was there with the Rangers. Narration was dry in the beginning, but once the story unfolded the narrator was ideal. If you like war stories this is a winner.

One of the best books I've ever read. An absolute must!

Reading along with the book, there are missing parts that are in the book but not the audio. Sometimes a sentence is cut out, sometimes a paragraph. This is frustrating.