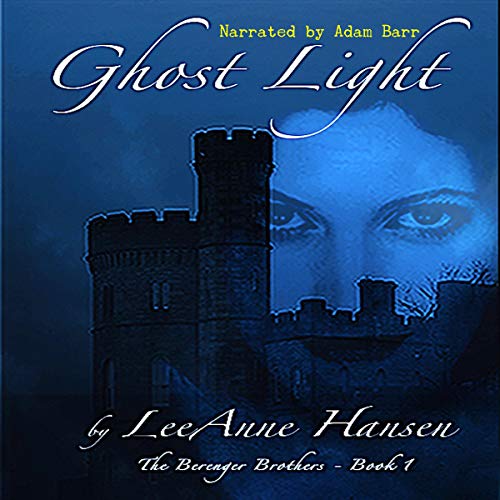 Fiona Corrigan is in love...but she has some difficulty discerning between the realities of the stage and her real life, especially when it comes to her handsome costar, Patrick Berenger. He wins her heart nightly onstage but seems hesitant to go any further.

Patrick is a man running from his past and is hell-bent on never confronting it, until one night when it catches up with him, summoning him and his acting troupe to the far reaches of Scotland. Fiona looks forward to the trip and to finally having time alone with Patrick. She never anticipated the appearance of his estranged brother Sean, or the manipulations of the eccentric Lord Thornbury, and the frightful apparition of a woman who haunts the stage each time the ghost light goes dark with her dire warning that death is waiting in the wings.

What listeners say about Ghost Light

So, I read this book on kindle when it first came out and was absolutely PUMPED when the audiobook came out. I love this story and all the humor, romance, and suspense. The characters all have a wonderful back story and it takes twists and turns you don’t expect.

Adam Barr does such a wonderful job with all the accents and voices. You can almost see it playing out in your mind like a play. This is a must listen to.

What a fun period piece. The wife and had the opportunity to enjoy Ghost Light while on a road trip to Tahoe and back. I won't spoil what happens. I'll just say you know its a great audiobook when you've been in the car all day and when you finally get to your destination, you continue sitting in the car for another ten minutes until the chapter ends. Love the reader!

Wow! Brilliant story, fabulous narration!
The plots - yes, more than one - the heroes, the heroine, the villains, the voices and accents - all just as near to perfect as could possible be in one story, so I am more than happy to recommend this audiobook or book, if you prefer.
I voluntarily listened to a copy of the audiobook supplied by the author and the above is my unbiased review.

I am between 3 and 4 stars on this book. There is a lot of things that I absolutely enjoyed with this book - it has a great premise; there is a lot of good humor and dialogue; the locale; and several of the characters. Some of what brought the story down for me - it was too long because it got bogged down in a lot of description and inner monologues - which were unnecessary. I felt that at times MC Fiona was very immature - especially when it came to sorting out her relationships.

A great positive here was the narrator, Adam Barr. He did a myriad of accents - Irish, British, Scottish, American - for the various characters. He did a very nice job with pacing and made the story more interesting to me.

Delightful story of romance and mystery!

I loved the imagery that this story conjured up in my mind. A beautiful old castle in the highlands of Scotland, in a remote spooky village, in the dead of winter with a traveling troupe of actors. It doesn’t get better than this. The characters are charming and the story is entertaining. I found myself wanting to find this village and spend a winter there myself. The reader brought the whole scene to life. All in all, a great read!

This was a great story for a road trip. The characters were interesting and it captured the period well.