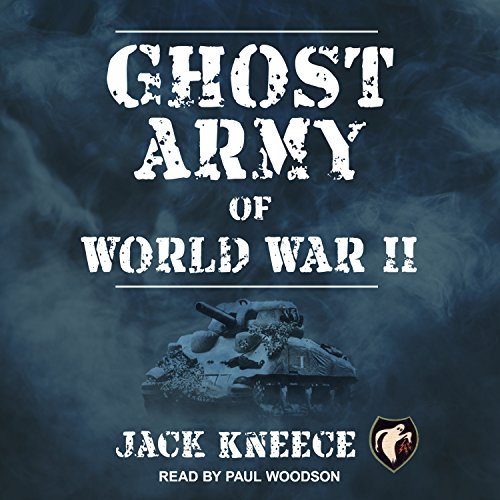 In 1941, the US began to form a hand-picked army to fight in Europe. What made it different is that its troops were composed of artists, actors, meteorologists, and sound technicians, and their true mission was not to fight, but to deceive the German Army. Information about the 23rd Headquarters Special Troops was classified top secret until 1996. Following the declassification, Jack Kneece interviewed many of the key personnel involved in this elaborate ruse, including fashion designer Bill Blass. Until the bombing of Pearl Harbor, many Americans were opposed to becoming involved in the war in Europe, and the military was ill-prepared to fight, with only 130,000 enlisted troops and equipment left over from World War I. One solution was to create a special force that gave the illusion of 30,000 heavily armed men. In fact, there were only 1,000. German soldiers referred to them as the "Phantom Army" because one moment they were in one place, and the next, they were attacking their flanks or from the rear. This small army duped the Germans successfully in 21 separate operations during World War II, many of which took place within a few hundred yards of the front lines.

As a bit of a WW2 history geek this offered insight into a different aspect of that period. The story of the ghost army is fascinating and the men as brave and integral to the war effort as any other.
However this book is poorly written, with rambling passages and repetition galore- how it got past an editor I don't know. It also lacks detailed description and analysis, relying on endless repetition of broad brush overviews and a handful of anecdotes. I persevered to the end in case any nuggets came out (I did say I was a bit of a geek) but was sorely tempted to give up.

Overall it's such a shame that this is so poorly written as the story deserves so much more.

The story itself concerning the the Ghost Army is really fascinating and should have been a really good read...but... the material is presented like an army report. This number was with this number and they acted like this number unit who moved 2 miles to join this number unit...and on and on. I kept listening because of the actual interesting story lines which would show up about 30% of the time. I am still wanting to know about the unit but am going to have to go find it somewhere else.

Just scraping together enough primary sources to call it a book

Tell me more about how to deceive the enemy! Too much typical general war narrative and not enough battle mechanics.

A must read for wwii enthusiasts

Just wow, I do not have alot to say as I would be here writing the story out to you and I cannot do it justice. Just trust me when I say you will not regret reading or listening to this book.