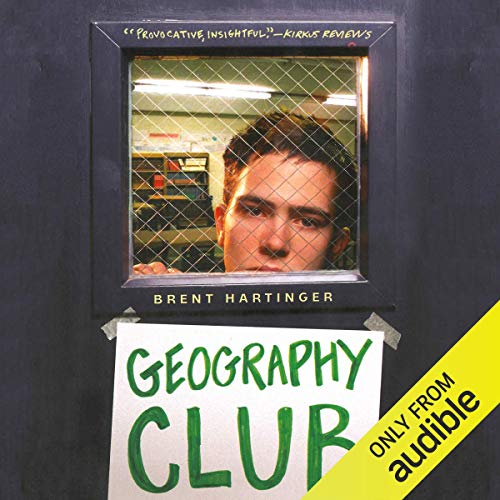 By: Brent Hartinger
Narrated by: Josh Hurley
Try for £0.00

Narrator Josh Hurley's performance has the fervent honesty of a confession, and his narration will resonate with listeners who know what it feels to be different and isolated. High school sophomore Russel Middlebrook is gay and closeted, and it feels like the only time he can really be himself is when he's chatting online with a gay buddy. When that buddy turns out to be the gorgeous star of the school's basketball team, and after his best friend reveals that she's bisexual, Russel begins to realize that he may not be alone, after all. Hurley movingly depicts how Russel's self-protective shell transforms into a voice that is filled with confidence and hope.

Russel Middlebrook is convinced he's the only gay kid at Goodkind High School. Then his online gay chat buddy turns out to be none other than Kevin, the popular but closeted star of the school's baseball team. Soon Russel meets other gay students, too. There's his best friend Min, who reveals that she is bisexual, and her soccer-playing girlfriend Terese. Then there's Terese's politically active friend, Ike. But how can kids this diverse get together without drawing attention to themselves?

"We just choose a club that's so boring, that nobody in their right mind would ever in a million years join it. We could call it Geography Club!"

Brent Hartinger's debut novel, what became first of a series about Russel Middlebrook, is a fast-paced, funny, and trenchant portrait of contemporary teenagers who may not learn any actual geography in their latest club, but who learn plenty about the treacherous social terrain of high school and the even more dangerous landscape of the human heart. This is Book 1 in the Russel Middlebrook Series.

What listeners say about Geography Club

The flawed hero is so true to life. We all know those times that we would prefer to forget that define who we are.

I am thoroughly perplexed on what to write for a review on this book. I came to read a book about a gay couple and what I got was a message about friendship. I could literally watch any disney channel television show if I wanted that. Before you read/listen to this, know that NO lgbt couples end up together, which is very disappointing.

What made the experience of listening to Geography Club the most enjoyable?

Josh Harley was totally convincing as the voice of Russell.

Would you recommend Geography Club to your friends? Why or why not?

I was drawn to the book after seeing the small independent film version, which I discovered before hearing of the series. As I was reading all four books in the series, my partner, who volunteers with a youth diversity committee at his school, asked about any resources that might be good for teens who are struggling with sexual/gender identity issues. I immediately suggested that we buy a set of the books for the group because (a) they are a bit more contemporary than others, (b) they offer a larger spectrum of diversity than is typical, and (c) the characters are imperfect, like everyone else, yet learn from their experiences. So, yes, I would highly recommend this book (and the subsequent entries in the series) to friends and colleagues.

They did, and it was a pleasant film, but really fails to really capture the heart of this book, which is about the relationships Russell has during a pivotal time in his life. So, my proposed tag line would be, "Preview to a great series of YA novels!"

I applaud Mr. Hartinger for writing a YA novel that really holds onto the voice of a teen. There are so many books, television shows, and movies out there in which young people espouse great proclamations and truths that are extremely rare for individuals with so little experience with life and who are soaking up as much as they can during those critical adolescent years. The voices of these characters feel very real, no matter how unglamorous or uncool as they may be received. Many thanks for an entertaining, yet compelling, series of books!

this book feels reaaaal outdated with how it treats queerness. feels like it was written by a straight author. if ur looking for a GOOD queer book.. this ain’t it tbh😫😫

Geography club is about a group of kids who are secretly LGBTQ plus who decide to make a club under the false name, the geography club.

Voice Actor: The voice actor for this piece did a phenomenal job of convincing me that he was 16 years old. I actually thought he could’ve been in high school based on how he read it and the sound of his voice.

Writing: The writing was very simplistic and easy enough to follow. I felt that there was less narrative and more dialogue or internal thought than other books that I have read.

Characters: each of the characters is unique and has their own personality.

Russ, the 16 year old protagonist from which the story is told, is a typical high school boy who is definitely influenced by the opinions of others and by peer pressure. He doesn’t wanna come
out and feel like the only gay kid at school. I thought Russ was decently developed for this first book, hopefully with more development as a series goes on. Continues to go back-and-forth during the story on doing what’s right versus doing what’s popular/expected.

Minh: sassy best friend to Russ. She seems to have a strong personality and is willing to stand up for what she believes in.

Kevin: semi stereotypical jock. Doesn’t check all of the boxes of what you would assume a stereotypical. Is kind and compassionate to a degree.

Gunnar: other best friend to Russ. Manipulative asshole. Wants a girlfriend so bad he forces Russ to go on dates with this girl just so he can go on a date with her friend, even though he knows Russ is gay.

Brian: Poor Brian. The kid no one sits with. The butt of everyone’s jokes. Gets picked on by everyone.

Story: The story was very character driven, based around Russ and his personal fight with not coming out while also wanting to connect with others to discover himself. He makes decisions that are questionable because he doesn’t want to be found out or that he is expected to make in order to be popular.

This is one of those books in which a lot happens without a lot happening. It didn’t totally suck but it also didn’t totally blow me away. I did expect a little more to happen with Kevin than what did, but perhaps that will be in another book. Cute gay teen novel.

I came across this audiobook by looking for freebies in between credits on Audible. Now, I'm 30 years old and really enjoy YA books. I enjoy the simplicity and how they're usually easy to follow along. I also listen to these while I'm working, so the less complicated the story, the better for me.

This book was fantastic. While the story was a bit corny, guess what? It is a story that describes what a LOT of gay youth go through... and dang, it brought me back to my experiences in high school growing up as a gay boy. The characters had good background, the story was spicy, and there was a really lovely lesson learned from our beloved Brian!

I highly recommend this. Easy, simple, but fantastic story.

I love all brents books this is an amazing series keeps your hooked til the end. he is a great author and needs to write another series like this one.

Main character was a spineless jerk, felt NOOO sympathy for him.....and yes I have been in a VERY similar situation, and I went with not hurting someone...and yes there were consequences but I’ve NEVER regretted it. I honestly couldn’t live with myself if I acted like russel.

Good story, worth a listen but one of the rare instances where I think the movie is better than the book.
What they did with the source material really elevates the story!

I am continuing my coming-of-age binge with 'Geography Club'. In this book, Russel Middlebrook, a lonely 16-year-old, is convinced he's the only gay kid in his high school. During an internet chat he meets another 16-year-old that attends his school. This, plus learning his best friend is bisexual, leads to finding other gay kids in their school. They decide to start an after-school support group, but knowing they cannot reveal the true nature of the group, choose the name 'geography club', thinking there's no way any other students will want to join.

Russel, as the person telling the story, is the main character, but the book is about an ensemble of characters. All of the students in Russel's orbit have significant parts to play. They each struggle to find themselves, find boyfriends/girlfriends and find connections with each other. Brent Hartinger's characters are real. The reader identifies with them through triumphs and failures, even to the bittersweet ending. It's truly terrific storytelling.

Josh Hurley's narration is fantastic. He brings these characters and their stories such life. I can't imagine anyone else more suited to tell Russel's story.