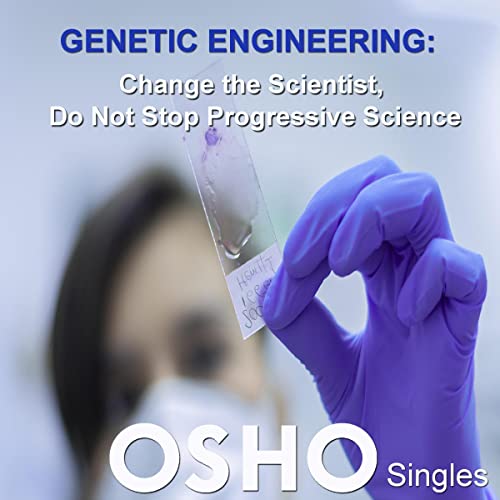 While in the world of literature and film, mad scientists create monsters like "Frankenstein” and almost all religions are promoting skepticism towards science and the fear of manipulating human beings, reality has bypassed such concerns long ago. Osho has a unique view – supporting science, specifically genetic science – but as a conscious science.

While acknowledging the fear that genetics can fall into the hands of totalitarian governments, Osho addresses this issue in a much wider context – going beyond the fear. “The first is, never act out of fear. If man had acted out of fear, there would have been no progress possible.” This is a very thought-provoking talk by Osho. According to him the world can be such a beautiful place, certainly there are risks and dangers, and still it is worth to take the risks. Humanity has everything to gain and nothing to lose. The risks are worth taking. With consciousness, with awareness.

“Life cannot allow itself to be destroyed – it is going to give tremendous resistance. In that resistance is hidden the birth of a new man, of a new dawn, of a new order, of the whole of life and existence.” (Osho)

From the series: The New Dawn, Chapter #21

Osho Talks – from original recordings of live events with Osho and his audience of seekers and friends from around the world. Recorded at the Osho International Meditation Resort, Pune, India.

What listeners say about Genetic Engineering