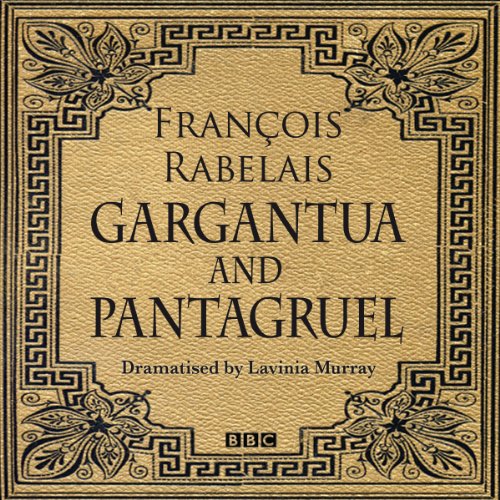 Gargantua and Pantagruel by Francois Rabelais. Dramatised by Lavinia Murray.

Episode 1: Gargantua. The bawdy, exuburant adventures of medieval giants. A dizzying blend of fantasy, comedy, philosophy and scatological humour. The world's a messy place. The first episode depicts the young life of the giant Gargantua, who is reduced to laughable insanity by an education at the hands of paternal ignorance, old crones and syphilitic professors.

Episode 2: - Pantagruel. Concluding the bawdy and scatological adventures of Medieval giants. This episode concentrates on the story of Gargantua's son, Pantagruel and his morally dubious friend Panurge, as they go on a quest to discover whether marriage is for them. On the way they have many adventures before they come before the Seer of the Holy Bottle who gives them a definitive judgement.

Starring David Troughton as Rabelais with a full cast. Gargantua and Pantagruel is dramatised by Lavinia Murray.

Too many sound effects

Too many sound effects mar the clarity of this otherwise beautiful rendition. Not for the hard of hearing.

...but don't let that put you off as I didn't think it would be. The performance is probably 4.5 so if you know you want to hear this story, this is a good choice to do so.