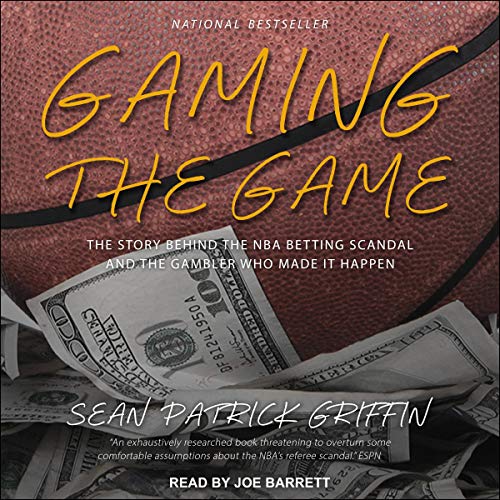 By: Sean Patrick Griffin
Narrated by: Joe Barrett
Try for £0.00

In June 2007, the FBI informed the NBA that one of its referees, Tim Donaghy, was the subject of a probe into illegal gambling. Within months, the public knew the broad outlines of a scheme involving Donaghy betting on games he officiated with a coconspirator, longtime Donaghy acquaintance and professional gambler Jimmy "Baba" Battista. They were joined in the scandal by a mutual childhood friend, Tommy Martino. By November 2008, each man had pleaded guilty to charges relating to the conspiracy and was in federal prison.

Author Sean Patrick Griffin, PhD, a former Philadelphia police officer turned university professor and best-selling author, conducted dozens of interviews and obtained betting records, referee statistics, court documents, and unique access to witness statements and confidential law-enforcement files. Years of research are presented in Gaming the Game, which looks inside the FBI's investigation and beyond to provide the definitive account of the scandal. Jimmy Battista's remarkable decades-long bookmaking and betting career is examined, including and especially his role as architect of the widely publicized scandal. Battista, who - unlike his coconspirators - never spoke with federal authorities, reveals for the first time the intricate details of the scheme, most of which only he knows.

What listeners say about Gaming the Game