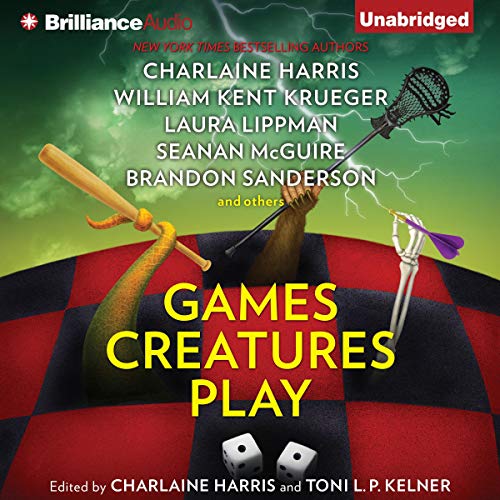 Welcome to the wide world of paranormal pastimes, where striking out might strike you dead.

Editors Charlaine Harris and Toni L. P. Kelner are your announcers for this all-new story collection of the most peculiar plays ever made.…

Sports fans live and die by their teams’ successes and failures - though not literally. But these 14 authors have written spirited - in more ways than one - new tales of killer competitions that would make even the most die-hard players ask to be benched.

New York Times best seller Seanan McGuire presents "Jammed", in which a chimera loose during the Roller Derby makes it anyone’s guess as to who will still be skating by the time the buzzer sounds.

In number-one New York Times best-selling author Brandon Sanderson’s "Dreamer", a game of cops and robbers is a new challenge when the players are able to switch bodies at will.

These and eight more supernatural sporting stories are guaranteed to have you rooting for the home team…or else.…

some good stories, great narration - worth a look

worth a listen, wished there were more stories, some were weak. narration was absolutely brilliant!

Yet again, Charlaine Harris and friends provide thrilling short stories that make you pause to listen.

This is a book of the good the ok and the boring...

Not all the pieces in this book were to my taste but I still enjoyed the overall..

Anthologies like this are always great at introducing new authors that you wouldn't necessarily read..

I'll be returning this, and that makes me sad. I really enjoyed the stories, but it took some effort to dig them out from under the narration.

Kate Rudd seems to have only the one character voice, making all the strong female characters sound the same, even when she's using a strong accent. Paired with an awkward cadence, the effect is something like having Christopher Walken reading all the male leads in an anthology. It would certainly be... distinctive, but may not be right for all listeners.

Todd Haberkorn does much better with his part, with the only notable exception being his portrayal of Sister Hepsebah in the second story. A woman so sultry and beautiful that she can tempt a basically decent boy into doing terrible, terrible things to others is portrayed with a voice better suited to a decrepit crone.

With that said, I'm going to purchase this as an ebook instead.

A mess, this group of stories was horrible to try and follow. Disjointed stories, I love Charlaine Harris books, this though was so disappointing.

Absolutely true to the other collection of works by Charlaine Harris. Entertaining, diverse and great presentations by the tellers of the tales.

Narration was great! And the stories were pretty entertaining. I'd recommend it as away to pass time in traffic.

I really enjoyed the stories. Only one or two were a little slow for my taste but overall a great listen.

What made the experience of listening to Games Creatures Play the most enjoyable?

The stories were well written and well narrated. They provided me with a little chuckle.

What was one of the most memorable moments of Games Creatures Play?

Brandon Sanderson's contribution was a great take on the game of tag.

Which character – as performed by Todd Haberkorn and Kate Rudd – was your favorite?

Too many great character's to pick from. They were all performed well.

This provided plenty of chuckles for me.