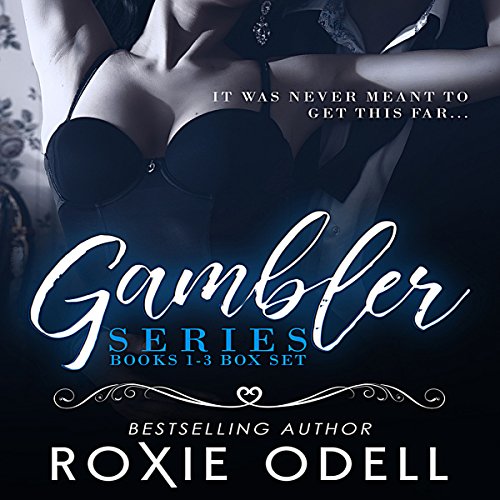 By: Roxie Odell
Narrated by: Hannah Pralle
Try for £0.00

Special limited edition deal: For the first time ever, get the complete Gambler series in one convenient bundle!

What happens in Vegas... doesn't always stay in Vegas.

On the rebound, Nevada native Corrine Smith finds herself in Vegas. The last thing she needs is to get involved with another man, but then she meets him - not just any man but the man. Smooth and gorgeous, Derrick Quinn makes Corrine feel more like a woman than any man has ever done before, and she finds their chance encounter impossible to resist.

Nothing happens in a bubble, even in Vegas. Corrine's blistering collision with the amazing Mr. Quinn throws her for a loop when she discovers her trysting partner is actually a married man. Just when she figures Lady Luck has given up on her, though, she's surprised to get a second chance with her scorching partner in passion.

It was never meant to get this far....

Working as general counsel for the hot new resort hotel on the Strip has its ups and downs - literally. Derrick finds himself stuck in a malfunctioning hotel elevator with a neurotic, smoking-hot woman. He has no choice but to kiss her, a gesture he considers medicinal and therapeutic for them both. He doesn't intend for one thing to lead to another, but it does, quickly becoming an inferno of passion before he can stop it.

Derrick's a gambling man willing to roll the dice in Vegas, but will he gain more than he loses? Will he find that being with Corrine Smith is a risk worth taking?

Author's note: This is a complete story in a full-length bundle, with a happily ever after ending. Recommended for 18+ listeners, new adult listeners, and up.

So this book has me wishing for my own broken elevator. The story is well paced and very enjoyable, I especially love that it is on a box set so that I’m not searching for the next in the series. This one had my attention from the very start to the end

I enjoyed the narrator Hannah Pralle

So pleased I had the box set to listen,to as I could not have been able to wait for the next series.
Passionate and fast paced. Vegas, casinos love and oh yes excitement.

The Gambler Audiobook series by Roxie O’Dell was an engaging story of love, addiction, and passion. It’s the story of Corrine and Derrick. She’s in Vegas on her way to an interview and gets stuck in an elevator with Derrick. She’s got a huge phobia of enclosed spaces and freaks….he calms her in the most unusual manner….and they quickly become smitten with one another. They both have their vices that get in the way of their relationship. This is a three-part series in one Audiobook bundle!!!

The series was narrated by Hannah Pralle who does a wonderful job interpreting the characters, their nuances, and overall personalities. The only downside is that you could hear every single intake of breath and lips sticking together as she spoke. Maybe it was the mic? It detracted a bit from the story…but, her delivery and performance were great!!!!

I am volunteering to leave a review for an Advance Reader Copy of this Audiobook.

Good bundle series, of phobias, secrets, he is married, and passion. Their relationship is rocky. Narration was good by Hannah. Good plot and enjoyable. Given audio for my voluntary review