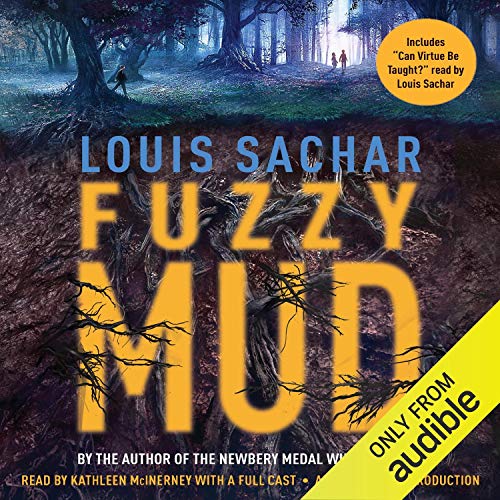 By: Louis Sachar
Narrated by: Kathleen McInerney
Try for £0.00

If you go down to the woods today... Well, all children know not to, don't they?

Tamaya is on a scholarship to the prestigious Woodridge Academy, and every day she and seventh-grader Marshall walk to school together. They never go through the woods. And when they arrive at school, they stop talking to each other - because Marshall can't be seen to be friends with a little kid like Tamaya. Especially not with Chad around. Chad-the-bully, who makes Marshall's life utterly miserable.

But today, hoping to avoid Chad, Marshall and Tamaya decide to go through the woods.... And what is waiting there for them is strange, sinister and entirely unexpected. The next day Chad doesn't turn up at school - no one knows where he is, not even his family. And Tamaya's arm is covered in a horribly burning, itchy wound.

As two unlikely heroes set out to rescue their bully, the town is about to be turned upside down by the mysterious fuzzy mud....

A funny, sinister and thought-provoking comic thriller from the multimillion-copy selling author of Holes and There's a Boy in the Girls' Bathroom.

Louis Sachar was born in New York. He was inspired to write children's books after working as a teacher's aide to gain extra credit. After graduation he worked in a sweater warehouse in Connecticut and wrote at night. He was soon fired from that job and moved on to law school, where, in his first week of study, Sideways Stories from Wayside School was published. In 2000 Louis Sacher wrote Holes, which became both an instant classic and a film starring Sigourney Weaver. Holes was his first book to be published in the UK and continues to prove popular among the younger audience.

What listeners say about Fuzzy Mud

This book was well-written, incorporating informal narrative alternating with the future court case. A rich scientific vocabulary is there to be discussed, as are many points for debate. Ideal for shared or guided reading.