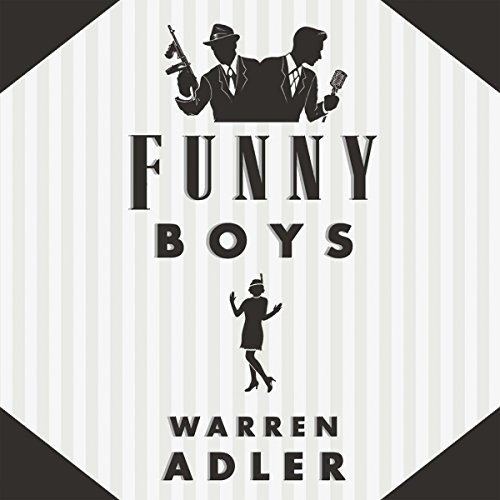 A dark comedy of errors about success, the mob, and finding true love

Even when murderous gangsters are shoving his head into a toilet, Mickey Fine can’t stop making jokes. He wants a career in comedy so badly that he takes a job as a Tummler, a comedian and host for a hotel in the Catskills - a hotel where he knows the very gangsters who abused him are staying.

An already dangerous situation escalates when Mickey falls for Mutzie, the “number one girl” of Pep who is arguably the most violent thug in the hotel. Betrayals and politics within the mob play out behind the scenes while Mutzie joins Mickey on stage, and the pair inevitably find themselves marked for death.

But Mickey is naive to the more sinister side of his audience made up of mobsters and other power players of New York’s underbelly. As their circumstances start catching up with them and the body counts start mounting, Mickey and Mutzie start angling for a way out.

That, of course, isn’t as easy as it sounds.

What listeners say about Funny Boys

Clifford Edwards really made the story come to life! I loved every second of this! I listened while on a 17 hour road trip so it helped time go by faster!

Amazing narration! This was a compelling story and the contemporary jokes were right up my alley.

I didn't know much about Murder Incorporated in New York in the 1920's and 30's, but "Funny Boys" really shed some light on the subject for me. During prohibition and after, there was a small band of ruthless thugs maintaining order on the streets of New York with iron fists and ice picks! The "Combination", named that because it was the joined forces of the Jewish and Italian mobsters, had the politicians and law enforcers eating out of the palm of their hands in the 1930's. "Funny Boys" is historical fiction and a dark, yet funny, love story. Some of the scenes get a bit savage but Mickey Fine, a young Jewish comedian in the Catskills, tries to keep the mob bosses and their wives entertained, while trying to keep his love for Mutzie, a beautiful Jean Harlow look alike, hidden from the "bad guys".
The narration was excellent! I felt like I was listening to a radio show in the 1940's. The Story played like a black and white movie in my head and I could see all the players clearly in my mind. Clifford Edwards did a great job of bringing every character to life. Each one was different but not in a distracting way. The voices fit the character.
In conclusion, really good story, easy on the ears, worthwhile investment. Five Stars!!

had my attention from the first, great story.

I really enjoyed this book, it gave me an insight into the mob culture of New York in the 1920"s which I didn't know much about. It was well-written and although it contained sex, it did not seem gratuitous sex, more like a portrayal of how it would actually be given the characters and the milieu in which the book is set.
I thought the narrator did an excellent job of portraying the characters, never going over-the top and he was especially good with the dialog pf the tumler,a kind of Jewish comedian, who kept wise-cracking throughout the book even in the most difficult situations.

I thoroughly enjoyed listening to this book. The writing flowed effortlessly throughout as you would expect from a writer of the caliber of Warren Adler and the story progressed at a nice pace.
The story takes place in the 1920’s in the Catskills where the Jewish and Italian mobsters vacation during the Summer at a hotel run by a Jewish businessman named Gorlick. whose sole preoccupation is to keep them all happy at all costs. To ensure they have a good time he hires a young Jewish boy, Mickey Fine to be a full -time comedian, and MC ,(tumler in yiddish) always available to entertain them with his jokes and one-liners.
The heroine of the story is a rather dowdy ,plain high-school girl, Mutzie, from a working class Jewish family in Brownsville New York who is frustrated by the prospect of a humdrum dull life married to an uninspiring local boy and ending up like all of the other girls she knows. She aspires to live a life of excitement and glamor like her screen idol , Jean Harlow and to this end she has her hair dyed blonde and styled and buys new clothes to make her look like her. She now becomes attractive to all the gangster types hanging around the Candy Store and soon becomes the “number one” girlfriend of one of the up and coming hit men for the mob, Pep. She is excited as he shows her a good time and she sees the respect she is shown by the other men as Pep’s girlfriend. He installs her for the Summer at Gorlick’s hotel in the Catskills with all of the other gangsters ‘ wives and girlfriends. She soon finds out that life is not as idyllic as she had hoped and Pep requires her to do things she hadn’t bargained for. She is desperate to escape and Mickey is there to help her.
The story was good but I think that the narration by Clifford Edwards was brilliant. He made this story and the characters come to life for me. He captured the wise guy accents perfectly and his intonation and timing were perfect. He delivered Mickey’s one-liners and stories spot on. At times I felt as if I was watching a well-acted play.
I would recommend this book wholeheartedly.