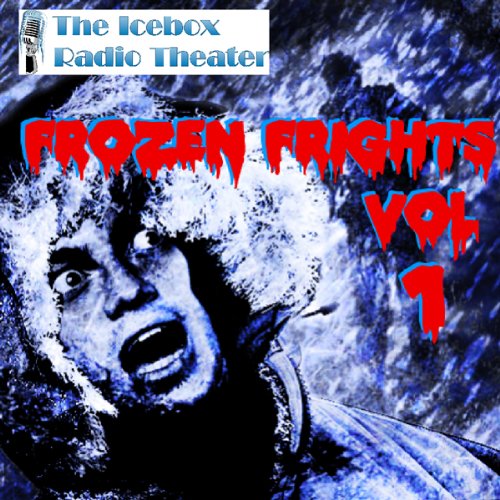 1) The Thing on the Ice - "You never think to look at the weather when you ice fish." So begins one man's amazing journey onto frozen lakes of Minnesota. Trapped by a vicious storm, a fisherman holds on against the horrifying thing that comes for him out of the storm.

2) Cass & Lol - Two teenage girls, friends from different worlds. Tales of vampires are all the rage, but what if one of the girls takes her fascination too far?

3) Windego - A phone company man braves a vicious storm to reach a Northern reserve hours from civilization. But there is a creature afoot that is responsible for driving men to cannibalism when winter's grip grows too tight.. A creature called 'Windego'.

4) Catnip - Sybil Pierce: English teacher, retired. Here life her many, many cats. But when a nasty fall leaves Sybil alone and incapacitated in the dark of her basement and her cats unfed she comes facetoface with the gossamer veil that is feline 'domestication'.

5) Pickaxe Hill - A house on the lake. A perfect spot for a romantic getaway. If only it wasn’t for all those murders…

6) The Diary - Aunt Mavis is dead. Jean, an adult niece who was always Mavis' favorite, drives to her house to settle her affairs. She discovers Mavis' diary, and the horrible family secret that Mavis STILL wants no one to know.

7) The Dunes - Cynthia Parkins, a woman apart. The father she worshiped and cared for is now gone, and she decides to take her inheritance by 'The Dunes' a dilapidated mansion built on a granite boulder in the middle of a dune sea. There she can be isolated;until the houses' other residents make themselves known.

8) The Bats - On an isolated island in the middle of Rainy Lake, there is a cave. Inside a unique creature thrives. One woman learns that disturbing these bats, disturbs the very fabric of reality itself.

9) Wolf House - On an island straddling the US/Canadian border, there sits an abandoned house nobody wants. Now, four people, a historian, a park ranger, and one bureaucrat each from the two countries, gather to try and wade through the mess of red tape entangling the houses' future. But their exercise in diplomacy soon turns to an exercise in terror when they discover the house was never totally abandoned.

Would you listen to Frozen Frights, Volume 1 again? Why?

This shoesrting radio program is fantastic. I reccommned it to every one who loves radio programs and horror stories. Even my 6 year old grandson loved it. The stories will keep you on the edges of you seat.

I wasn't sure what to expect from this audiobook at first - but I quite enjoyed it! There are a number of scary stories, most of which are enjoyable. Only a few of the stories had so-so narration, the rest were good. The subject matter of the stories varies quite a bit, so I'm sure there's something in here for everyone. Recommended!

If the Coen Brothers made a spook anthology I could see it having the same feel as this audio book. Some of the stories were genuinely creepy and rather smart. I have listened to a lot of audio horror narration and drama, and stories like &quot;the thing on the ice&quot; have a timelessness to them, almost a creepypasta feel, without having to painstakingly describe what it's like to be eviscerated or recreate the sound of a head being caved in. The first story especially works to generate a feeling of isolation and paranoia distinct to the upper mid-west, with a stinging revelation of exactly what it is that you would not want to see (yet still look for) out your window into the cold, dark storm. The stories are also smart and have real themes and emotions attached to their characters and plots. That said, stories like &quot;Wolf House&quot; and &quot;The Dunes&quot; are a little hokey, and the acting varies from solid to melodramatic to flat, but this is basically public radio spook theater, so I found all of it at least fun. I really liked &quot;The Thing on the Ice&quot;, &quot;The Diary&quot;, &quot;The Wendigo&quot; (though the audio croaked on that one a bit), &quot;catnip&quot;, and oddly enough, &quot;The Bats&quot;. I say odd because the premise seems 1950's SciFi, but the story itself melts into some old-school weird fiction.

I really liked most of the stories in this Set..
The First and the last stories are the Highlights woth some great stories in between.. Pretty good performances throughout, in some the audio gets a little tough to hear, but overall is excellent.. Definetely worth the money and it's a great price!!

was a wonderful listen, a great way to fill a quiet night, great stories

I highly recommend these stories. Not NY Times Best Seller material. Take it for what it is, not what it's not and these stories and performances are a lot of fun. I thoroughly enjoyed them, they did a great job of capturing the atmosphere of old radio shows. A couple of the stories stood out as good.

Would you be willing to try another book from Icebox Radio Theater? Why or why not?

Did the narrator do a good job differentiating all the characters? How?

These are performances with different actors playing each role.

Yes, I got quite caught up in it.

The performances were the best, for me. What I liked least was some of the endings.

Would you ever listen to anything by Icebox Radio Theater again?

Performances were a GREAT delivery, the production and effects were well done, as well, but the writing itself somewhat lacked in the "scary" department. In some cases, if it wasn't for the background sound/music and overall atmospheric tone, the stories wouldn't have seemed scary to me, and they weren't entirely original horror, either. Some stories I just didn't know what to make of, I sorta scratched my head and said "huh". However, I will definitely not let the story writing stop me from trying out another of their productions, as I really did enjoy the performances and this production is only their first volume.
The stories that really stood out to me were the first story, "The Thing on the Ice" and the eighth story, "The Bats", not saying they were great, but they stood out. There's a mix of ghost stories and other supernatural elements in the stories themselves, and some were just okay, but I thought all had pretty good audio performances, just could have benefited from tighter or more original writing. Overall, nice radio theater for cold nights happening now in January. So yeah, this was pretty okay. On Goodreads "okay" is measured by two stars, but I rated this one three stars because of the quality performances. For four bucks, I would say this is worth a listen. The stories would probably be really creepy for much younger audiences.