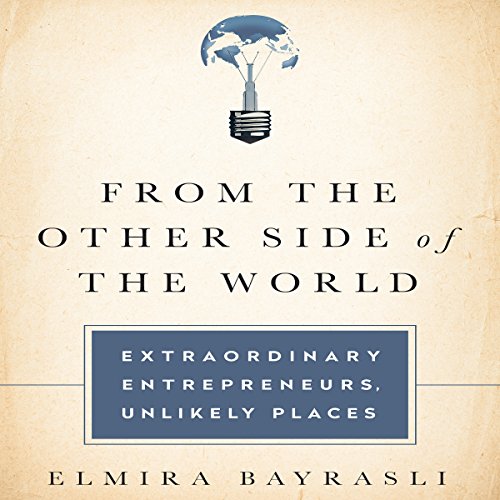 From the Other Side of the World

From the Other Side of the World

Why the next Steve Jobs is just as likely to come from Lagos, Acapulco, Lahore, or Mumbai as from Silicon Valley.

Elmira Bayrasli's colorful narrative brings listeners inside the world of high-growth entrepreneurs as they overcome vexing obstacles to build businesses that create jobs and economic growth and - perhaps most important - shift mindsets. Here are the people who personify the transformative force of entrepreneurship from parts of the world that will be the source of the overwhelming amount of economic growth over the next 25 years.

Bülent Çelebi applies creative genius as he searches for the talent needed to roll out a wireless mesh technology, convincing skeptics from Europe and America that a breakthrough like this could be developed in Turkey. Tayo Oviosu grapples with the poor infrastructure and political chaos to bring financial services to the vast majority of Nigerians who lack access to banks and other financial institutions.

Bayrasli takes us on an extraordinary journey, with fascinating eyewitness accounts of courage, endurance, and ingenuity, as people in some of the world's most challenging societies build globally competitive products and services that garner international praise and investment. As these extraordinary entrepreneurs create new economic possibilities in their countries, it becomes clear that the same game-changing creative development that happened in Silicon Valley in the 1960s is occurring right now in unexpected places on "the other side of the world".

"Meet seven entrepreneurs who have persisted and prevailed despite difficult circumstances (including outright harassment) in order to achieve success in some of the most corrupt corners of the world…. By conveying the ingenuity, courage, and smarts of these entrepreneurs, Elmira Bayrasli shows us people can thrive and create opportunities for others even in the most hostile and difficult situations." ( Success Magazine)