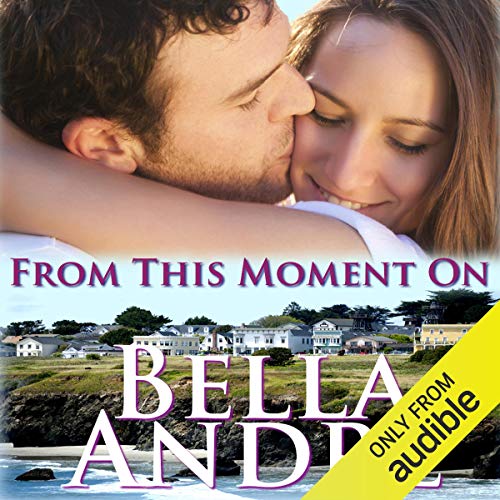 From This Moment On

From This Moment On

In From This Moment On, best-selling author Bella Andre introduces you to Marcus, the second Sullivan bad boy, whose life will never be the same from the moment he meets Nicola....

For 36 years, Marcus Sullivan has been the responsible older brother, stepping in to take care of his seven siblings after their father died when they were children. But when the perfectly ordered future he's planned for himself turns out to be nothing but a lie, Marcus needs one reckless night to shake free from it all.

Nicola Harding is known throughout the world by only one name - Nico - for her catchy, sensual pop songs. Only what no one knows about the 25-year-old singer is that her sex-kitten image is totally false. After a terrible betrayal by a man who loved fame far more than he ever loved her, she vows not to let anyone else get close enough to find out who she really is ... or hurt her again. Especially not the gorgeous stranger she meets at a nightclub, even though the hunger - and the sinful promises - in his dark eyes make her want to spill all her secrets.

One night is all Nicola and Marcus agree to share with each other. But nothing goes as they plan, when instead of simply tangling limbs, they find a deeper connection than either of them could have anticipated. And even though they both try to fight it, growing emotions and sizzling attraction keep drawing them closer together - close enough for them to wonder if stealing one more secret moment together can ever be enough....

About the author: Known for "sensual, empowered stories enveloped in heady romance" (Publisher's Weekly) about sizzling alpha heroes and the strong women they'll love forever, many of Bella's 20+ titles have appeared on Top 50 best seller lists, including The Look of Love, From this Moment On, Can't Help Falling in Love, Game for Love, Ecstasy, Candy Store, and Love Me. Her books have been Cosmopolitan Magazine Red Hot Reads twice, and have been translated into German, Spanish, French, Italian, Thai, Japanese, and Ukrainian.

Never Too Hot won the Award of Excellence in 2011. The Washington Post has called her "One of the top digital writers in America" and she has been featured in Forbes, The Wall Street Journal, USA Today, and on National Public Radio.

What listeners say about From This Moment On

I have listened and re listened to this whole series and love all the male charectors. There's just the right amount of romance: if a little predictable, as well as steam to keep me satisfied.

This is my 2nd book by this author. I was hoping that book two would not be let down and I am so glad to say it was not. I really enjoyed the story of Marcus Sullivan and Nicola. It was charming with a inelligent story line. And, yes this author brings the heat. This is what I expect in a good modern day romance. The narrator really brings this story to live. Did I say I have already downloaded book #3. I am so glad I found this author, she is totally terriffic.

was pretty good but not great

This is an enjoyable light hearted listen. Granted, this series doesn't arouse your mind intellectually but it does entertain. The story and romance was good and kept me interested. I got the first two in this series on sale so I'm actually glad I didn't use credits for them. If you can get them on sale they're worth a listen.

This is the 2nd book in the Sullivan's series and it was everything I hoped it would be. I really liked Marcus, he's the eldest of the Sullivan kids and he's got the "in control" thing going on =) The narrator did a good job too. I think I would have liked it better read by a male narrator but I tend to like male narrators for strong male characters. This is typical romance story and completely worth the credit!

Would you consider the audio edition of From This Moment On to be better than the print version?

I enjoy listening to books as it makes the train trip to work and back everyday more enjoyable, it is not always easy to open a book, especially if you are standing, but listening is great. You get much more out of the book if the narrator is good like Eva, makes it more interesting.

Just a nice story, easy to listen to didn't require a great deal of thinking about which suits me to and from work.

Her ability to make the people come alive and you knew who was talking as she kept the voices going really well. Sometimes narrators fall short with remembering who is talking The queen of narrators if Susan Ericksson.

Nice story, can't wait for the next Sullivan!

What did you love best about From This Moment On?

The story is great, the continuation in this series is something I'm looking forward to. I am dying to know what happens to the next Sullivan!

Another winner from Ms. Andre

This book didn't disappoint - it had great characters, good plot, a doomed love affair and was thoroughly entertaining which is what we hope we get from a book.

Worth a credit? These books aren't rocket science but if you're in the mood for a light, easygoing enjoyable listen that doesn't challenge you then this is your book.

not much of a story

now I have completed second Sullivan, I have had enough of the mindless sex for awhile,good if that is a lot of sex no real plot or substantial reading

Marcus and Nicola (Pop-star) are an unlikely piaring. I didn't expect this line-up and I am happy to say that it works. I like being delighted by plots. This is more of a coming of age for the 20-something woman, successful pop-star who must reconcile who she is, who everyone thinks she is, and who she wants to be. Marcus has to resolve his role as the patriarch of the family with the happiness and delight he has for the woman. I love the opening couple of chapters of the novel, when you finish them you will be hooked for the whole thing.

The Sullivan clan is lovable. One critique is Andre is slow to widen the circle to include others in the family especially from book 1. There novel is littered with pointed moments. Kaminsky does a great job narrating.

I love the way she changed Marcus and Nicola, very believable and sweet. This book is heavy on the romance. This series continues to get better. I already have read book three. Couldn't even take the time to write this review before I finished it.

I know this is a romance but that doesn't mean it needs to be stupid. I don't know which one was worse the narrator or the story. I couldn't even finish this book I was almost to the end but I thought if I had to listen to that narrator's voice for one more minute I would be sick. I turned it off. I've never listened/read a Bella Andre book before and I think any male would be insulted by the dialog. Real men do not talk, act or think like that...if they did I'd be single. Yuck!

I kept asking myself if I would like the story better if I read it (I really hated the narrator). I won't be getting any others by this author or narrator. I guess everyone is different and some will love this book but it just wasn't for me.

Love me some Sullivan’s!

Love this story as much as the first one, and so looking forward to listening to the next one, love its more then just the two main characters, love the whole family and hearing them bicker and support each other , great book and the narrator did an amazing job