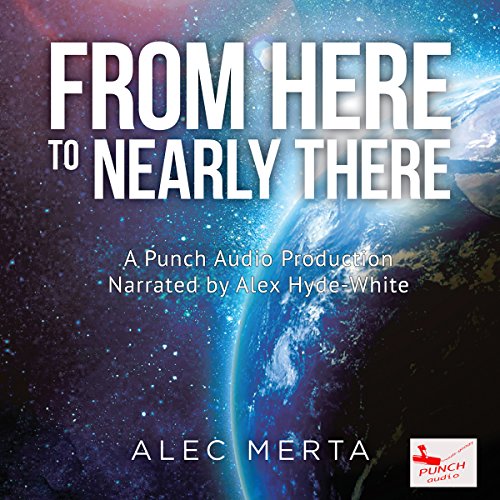 From Here to Nearly There

Nicholas Carver began his day in Yorkshire. He will end it aboard an interstellar superyacht. Before he leaves Earth, Carver must race across England in a desperate flight from police and aliens. The police want to arrest him. The aliens want to do something far worse. All Carver wants is to survive.

Join Carver, an English mapmaker and surveyor, as he is caught in a tale of intrigue that spans the cosmos. Together with Allie, a mysterious girl who bursts into his life, Carver reluctantly sets out to solve the greatest mystery humanity has ever faced. His success or failure will spell the dawn of a golden age or the ultimate doom of mankind.

By author Alec Merta, From Here to Nearly There is a novel that combines the best elements of a travelogue with those of a taut science-fiction thriller. By combining science with elements of real UFO and paranormal reports, Merta crafts a believable thriller that you will find hard to put down.

From Here to Nearly There is the first book of A Voyage in the Near Distance. The series tells the tale of two planets that are linked by an ancient mystery. One planet is a blue orb that orbits an average yellow star. It teems with human civilization. The second planet is Earth.

What listeners say about From Here to Nearly There

Scene setting Rather than Action

What about Alex Hyde-White, Punch Audio’s performance did you like?

The narrator was good. He has a clear and authoritative voice which does more to convey the character of Carver than the writing. The speed of narration is uncomfortably slow in the first chapter, but rights itself after this. He does vary his voice in a few places, but not in a silly way. I would listen to another book by Alex, but think his tone would especially suit non-fiction.

Do you think From Here to Nearly There needs a follow-up book? Why or why not?

Yes absolutely because nothing actually happens in this book. I'd suggest skipping straight to book two and picking up as the space adventure begins.

I liked the premise for the story as I especially like science fiction novels that start in a familiar setting. However it takes a really long time for anything to happen. The story lacks dramatic tension and pace - mostly because the main character (Carver) narrates from the future which removes any sense of concern I had for his wellbeing. Carver, who is some kind of geologist (it still isn't quite clear to me), is kidnapped by a woman who makes him drive to Yorkshire. That takes up the first half of the novel (2 hours listening). Carver goes along with Allie willingly and then they start working together and we find she is not what she appears to be. I found this all rather unbelievable as Carver just takes everything in his stride without showing any sign of concern or fear. I think the lack of characters and time periods (it's mostly just these two in a chronological timeframe) adds to the slow pace. The novel is written in the first person with Carver speaking directly to the reader / listener. Initially I liked this approach which brought back memories of Hitchhiker' Guide to the Galaxy, but after a while it began to irritate. Instead of bringing me closer to the characters it distanced me from them and I felt it stopped me being able to put myself in their shoes.I was hoping for space flight, dilemma and action, but felt what I got was setting up the premise for future novels. I knew that it was part of a series but even so, I didn't feel I was given much to entice me to additional novels in the series. (I received a promo copy of this book in exchange for an honest review).

I just couldn't get into my review copy, the progression of the story was so slow. I did speed up the listening speed and had high hopes this would help...