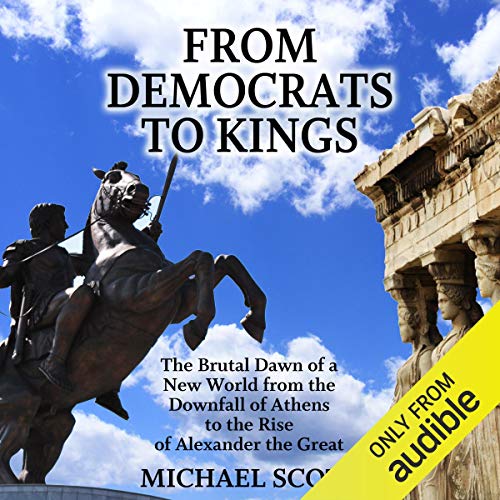 From Democrats to Kings

Athens, 404 BC. The democratic city-state has been ravaged by a long and bloody war with neighbouring Sparta. Less than 100 years later, Athens and the rest of Greece, not to mention a large part of the known world, has come under the control of an absolute monarch, a master of self-publicity and a model for despots for millennia to come: ‘megas alexandros’, Alexander the Great.

Michael Scott explores the dramatic and little-known story of how the ancient world was turned on its head - from democratic Athens to King Alexander the Great - in this superb example of popular history writing.

From Democrats to Kings also gives us a fresh take on the similar challenges we face today in the 21st century, a world in which many democracies - old and new - fight for survival.

What listeners say about From Democrats to Kings

Fascinating as well as entertaining

The fact that the narrator is also the author makes listening to this book much more interesting. Also you will not be sidelined by mispronunciations of classical names and quotations. I find this so irritating that I have returned several ancient history books.

Although this book is written by an academic, Michael Scott illustrates the history of 4th century BC Greece - that is, what eventually became Greece - with great skill aimed successfully at the relatively uneducated in classical terms. It will most probably whet your appetite for more accounts of the eastern Mediterranean in those early times. I can't wait for his next book.

What was one of the most memorable moments of From Democrats to Kings?

Michael Scott's sense of humour conveys the more amusing (and grisly) moments vividly. He's a very good story teller and his words and voice illustrate the more exciting episodes well. I cannot easily pick out any one or two moments: there are many, as the narrative leads from what could be a little dry (it is history after all) to an exciting anecdote that grabs you and illuminates the point he is driving at.

Which character – as performed by Michael Scott – was your favourite?

There are so many (all male) that it is almost impossible to choose. There is an elite troop of Theban fighters made up of couples of male lovers, and the generals Epaminondas and Pelopidas had quite an exciting time both martially and politically.

Michael Scott does not perform the characters, thank God. There are hundreds and hundreds of them, and it is not a work of fiction (associate professors do not indulge in that kind of thing in a historical account).

I wish more authors would read their own audio books. Mary Beard for example.

This is book is well worth listening too - even for people who think history is boring. Familiar names, Pluto, Aristotle, Socrates are brought alive. It is a great help that the author reads the text - so he is able to put the stress where he intends it to be. There are witty remarks inter-spaced throughout keeping the story interesting (although this might not be to everyone's taste). It sounds as though the author is presenting a lecture rather than reading his book out loud.
I know very little about Ancient History - not something we covered at school - apart from the Battle of Thermopolae and a sanitised version of Alexander the Great (he is only 'the Great' in European cultures - the Iranians think otherwise). The author covers the vast sweep of Greek history and the way democracy flowered and perished. The power struggle between the city states of Thebes, Athens and Sparta - there are lessons for our present day society here. Sparta declined because it would not allow outsiders to become Spartans and it's population declined because its men died in battle. It is a history of men - women didn't seem to play much of a role in public life - unless you got to be the Delphic oracle.
I find it fascinating that people 2500 years ago travelled beyond their own city when there were no metalled roads and boats would have been small. Pluto went from Athens to Scilly twice - a journey which might prove a bit of a challenge today!
What I would like to have known more about - and this is the disadvantage of an audio book - is the sources for this book. How accurate does the author think the picture he paints is? Nevertheless, it is a fascinating story and I recommend it.

Great book, passionately delivered. Not many books are written on this period of Greek history so it definitely fills a gap. Highly recommended.