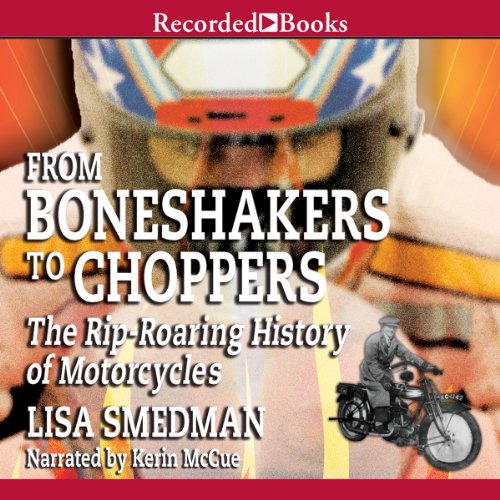 The motorcycle was invented in 1885 when two visionary Germans decided to attach a small internal combustion engine to a bicycle. From that humble origin begins a remarkable story of technological innovation, record-setting, and the formation of a whole new subculture of society. People began racing motorcycles not long after their introduction. In grueling endurance races, an American company named Harley-Davidson rode to the front of the pack with a thunderous roar.

Meanwhile, motorcycling was also becoming popular because motorcycles were a convenient and economical form of transportation. As motorcycles became more commonplace, riding clubs formed, people began to customize their bikes, and a new subculture emerged—one that wholly embraced the free-wheeling spirit of the motorcycle lifestyle—bikers!

Featuring a colorful reading from narrator Kerin McCue, From Boneshakers to Choppers gives listeners the scoop on the wild story of the motorcycle in all its many forms.

What listeners say about From Boneshakers to Choppers

An enjoyable but slightly superficial overview

A decent narrative history woven together of the history of motorcycles, including significant foreign events as well. A little cheezy at times, but a light hearted, fair, and enjoyable telling.