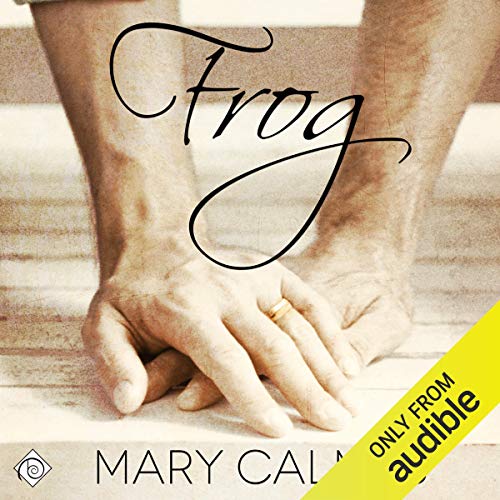 Weber Yates's dreams of stardom are about to be reduced to a ranch hand’s job in Texas, and his one relationship is with a guy so far out of his league he might as well be on the moon. Or at least in San Francisco, where Weber stops to see him one last time before settling down to the humble, lonely life he figures a frog like him has coming.

Cyrus Benning is a successful neurosurgeon, so details are never lost on him. He spotted the prince in a broken-down bull rider's clothing from day one. But watching Weber walk out on him keeps getting harder, and he’s not sure how much more his heart can take. Now Cyrus has one last chance to prove to Weber that it's not Weber's job that makes him Cyrus's perfect man, it's Weber himself. With the help of his sister's newly broken family, he’s ready to show Weber that the home the man’s been searching for has always been right there, with him. Cyrus might have laid down an ultimatum once, but now it's turned into a vow - he's never going to let Weber out of his life again.

What listeners say about Frog

I adore this story, it's simple and gorgeous, no fake drama just a man coming to terms with his place in the world, with his worth. The narration is beautiful, could listen to K.C Kelly reading the phone book and be enthralled.

absolutely loved this book.
would highly recommend. once I started listening I couldn't stop. 10/10

I loved this. the narrator is amazing. I found myself going on drives, unnecessarily, just to listen to it. it's the best audible book I've ever listened to

I loved this book so, so much. The story was beautiful and narration was absolutely perfect. Definitely one to listen to again and again.

The narrators accent and slow delivery was perfect for the kindly cowboy who finds that even a family in the middle of the city can both love and need him. Although there's plenty of humour and sex, the whole book is very gentle, making it a challenge for the reader to get pace and vocal variety into the final chapters. I've listened to it a couple of times, and really enjoyed it.

This is a lovely story, but I have to admit that the way everybody around Cyrus, and I mean everybody, falls for Web immediately and thinks he’s the best person in the world, began to grate a bit after a while. It’s all a bit too wonderful (and I do like fluff and sweetness). Still, it is a nice feel-good story. It is heavy on the family/kids stuff, which is probably great if you’re into that. It’s not so much my priority. The sex scene right at the beginning is a bit rough, but that's not what the rest of the book is about.

I like Web as a character very much, with his old-fashioned polite manners, and Cyrus is ok too. The other family members make a nice background to the story, which is in essence mostly about Weber and how he feels about himself, his self-worth and the way he thinks Cyrus looks at him. We hear the story from Weber’s POV (first person narrative).

The narrator totally makes it for me. He speaks very calmly, which I like. The accent and voice he uses for Web are sexy and, well, sweet. In general I prefer British voices, but I have come to appreciate American narrators more since subscribing to Audible. And K.C. Kelly’s deep ‘cowboy voice’ (is it a Texan accent? Southern at any rate) is great to listen to- in fact the fragment persuaded me to buy this audiobook. He doesn’t really do a lot of very distinctive voices in the story like some narrators do, but I don’t mind that.
I have purchased a few more books he narrates and am looking forward to them.

I loved this book when I read it and K.C. Kelly really brought it too life. This is the story of a ongoing romance between a wandering, bull riding cowboy with no family and no home, but a heart of gold, and a San Francisco neurosurgeon that loves him unconditionally. The story is told from Weber's (cowboy) POV and is basically about his journey of self discovery. Not him struggling with being gay, but failing to see his own self worth. It is really beautiful and the narrator does an excellent job. Definitely worth a credit.

Where does Frog rank among all the audiobooks you’ve listened to so far?

Up there with the audible books I keep returning too because it make me smile and laugh with the characters of the story.

What was one of the most memorable moments of Frog?

When Webber finally realize his love and worth to not only Cyrus but to Cyrus' family but most of all to his self and definitely the musical.

I like K. C. Kelly's performance because you could tell each character in the story without all the fake voices some performers do.

Who was the most memorable character of Frog and why?

I can't say one because I love several characters in this story from the 2 main characters to the kids, to the sister etc

It really deserves that extra ½♥. Really mello but still touching and hot m/m romance. Pride can be such a tricky bitch, keeping those lovers apart. It was an easy read over an afternoon, and really sweet.

The narrator has a lovely Southern drawl that was very appealing and easy on the ears. I thought he was a wonderful choice for Webber. Being from the South, I must say it worked well for me; I found it believable and more than comfortable to listen to. Like a tall glass of sweet iced tea on a hot day- only for my ears. OK, that's kind of a strange analogy, isn't it?

The only thing I wanted a little more of, and this may seem odd... but adversity. I suppose it's part of Webber's draw is that he can charm the pants of anyone... well, sort of, but there was a shit ton of acceptance going on. I hope that the world is filled with such loving, open-minded people out there, but deep down I found that hard to really believe that. But then again- this is fiction, suspension of disbelief and all that. It flirted with almost being 'too much' acceptance, but never quite crossed that line (it toed it, though).

This will most definitely be a re-read, it was just too easy to suck it down in a single afternoon.

I have this as a repeat listen. A story to return to like comfort food.

The voice actor was great!

One of my favorite books but audiobook was awful

Would you try another book from Mary Calmes and/or K.C. Kelly?

I have a Calmes addiction, but the narration was almost intolerable.

What was one of the most memorable moments of Frog?

I love the opening chapter, with the MCs making contact with each other after a long separation, and some background information interwoven into that conversation.

The narrator's accent and interpretation of Weber was way over the top. It made the character seem older and dumber than he actually is.

If you could play editor, what scene or scenes would you have cut from Frog?

Not a thing, it's one of my favorite books.

After waiting so long for this to come out on audio, I'm really disappointed. I managed to listen to it all the way through, but I expect I won't ever listen to it again.

One of my favorite comes to life in audio

Would you listen to Frog again? Why?

Yes, I have read this story too many times to count! Now, the audio is available and as good as the story. Perfect narrator for the characters.

What does K.C. Kelly bring to the story that you wouldn’t experience if you just read the book?

His voice is perfect for the retired Weber. He did a great job!

Who was the most memorable character of Frog and why?

Always Weber and the kids!

You will not be disappointed!

I have owned this audio for years, but never got around to listening to it. A friend has been nagging me for months, so I finally took the plunge. To be clear – I really enjoyed the story, and the narration was fantastic. But do I feel compelled to listen to it again? No. Has my friend read it over repeatedly and is now claiming it’s a comfort read? Yes. Different tastes, I guess.

I like the opposites attract story. Weber is a rodeo rider. He’s a cowboy. He’s run his body into the ground and has accepted it’s time to move on from the bull riding circuit. He hopes to find a job at a ranch and maybe settle down, although that might be a pipe dream. He’s on his way to a gig in Alaska when he breaks down to visit his ex. The one man he can never forget. The man who’s gotten under his skin. The man he cares for more than anyone else in the world. Not that there is anyone else…

Cyrus has a good life. He’s a neurosurgeon with a successful practice. He saves people’s lives. But he can’t seem to save Weber. Stupid man is running himself into the ground. So Cy put some distance between them – and has regretted it ever since. Now Weber’s back in San Francisco and Cy’s not letting him go.

And he has three little reasons Weber might want to stay, and one big one. The three little reasons are Cy’s nephews. His sister’s life is falling apart and Weber is in the perfect position to help. This part of the story really did touch my heart. Especially the xylophone. Precious. The big reason is, of course, Doc himself. That attraction is there, simmering just below the surface. And sometimes exploding.

But Weber’s convinced he’s just a frog and Cyrus should be kissing princes. Cy just doesn’t see it that way, and he takes it upon himself to convince Weber to stay – forever. Now, the story is told entirely from Weber’s point of view, so his transformation felt genuine. And I enjoyed witnessing his inner struggles. I like when characters are put through the wringer before they get their happily ever after.

I will also give kudos to K.C. Kelly. I always enjoy his performances and this was no exception. He does lazy cowboy drawl and uptight city doc really well. And his voice for the women and the children was good as well. So I encourage you to try this oldie but goodie. I’m glad I did.

What a perfect story

Loved this touching story of Cy and Weber. The narration my KC Kelly was outstanding. I’ll be listening again.

loved it. such characters. love all Mary Calmes books. this reader has a perfect voice.