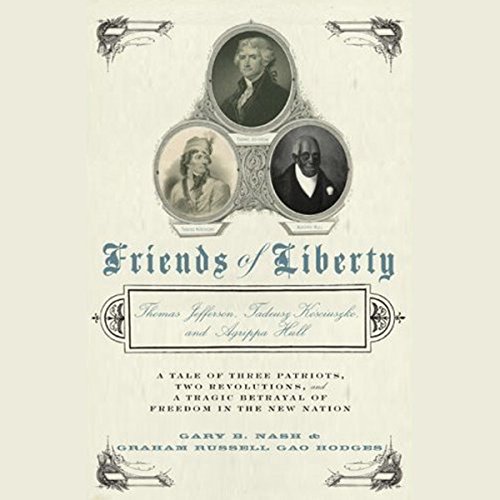 Here is the tragic history of an African-American soldier, a Polish revolutionary, and a flawed statesman who betrayed a friend and failed a nation. Friends of Liberty tells the remarkable story of three men whose lives were braided together by issues of liberty and race that fueled revolutions across two continents. Thomas Jefferson wrote the founding documents of the United States. Thaddeus Kosciuszko was a hero of the American Revolution and later led a spectacular but failed uprising in Poland, his homeland. Agrippa Hull, a free-born black New Englander, volunteered at 18 to join the Continental Army. During the Revolution, Hull served Kosciuszko as an orderly, and the two became fast friends.

Kosciuszko's abhorrence of bondage shaped his thinking about the oppression in his own land. When Kosciuszko returned to America in the 1790s, bearing the wounds of his own failed revolution, he and Jefferson forged an intense friendship based on their shared dreams for the global expansion of human freedom. They sealed their bond with a blood compact whereby Jefferson would liberate his slaves upon Kosciuszko's death. But Jefferson died without fulfilling the promise he had made to Kosciuszko - and to a fledgling nation founded on the principle of liberty and justice for all.

"A vivid and moving account of the remarkable interaction between three historically fascinating individuals. (Zbigniew Brzezinski, former U.S. National Security Advisor)
"By interweaving three lives of the American Revolution, Nash and Hodges offer a fascinating account of that era from the 'top down' and 'bottom up,' and make clear the way the struggle for independence unleashed radical hopes yet failed to solve the gravest contradiction in American life, the coexistence of slavery and freedom." (Eric Foner, DeWitt Clinton Professor of History, Columbia University)
"This is a dazzling account of three colorful figures whose lives are emblematic of all the many-colored threads that run through the American tapestry, and whose lives were devoted to the service of the ideals that founded our nation." (Henry Louis Gates, Jr., Alphonse Fletcher University Professor, Harvard University)

What listeners say about Friends of Liberty

I've listened to it in one go. Dense with facts as it is, it's also very well written and narrated. I've learn a lot about nuances and context of these historical decision, that have so profound impact on our today's societies. Really, it should be a mandatory read for all the affected nations.

I hope more people read/listen to this book

Beautifully written work about 3 men who played key roles in the shaping of the United States, 2 of whom are often forgotten by history. A must read for any Revolutionary War/history fan. Easy to listen to-the narrator was great-and flows really well. Whether you're a historian or just a history fan, I think everyone will enjoy this work.

Americans need to know our real history, not just the myths told to school children.