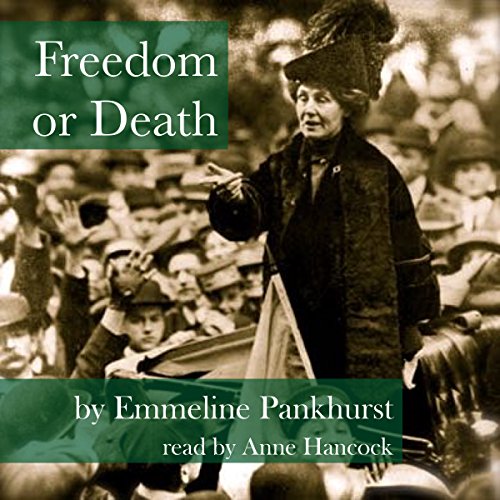 "Freedom or Death" was named by Britain's The Guardian newspaper as one of the top 10 greatest speeches of the 20th century. In 1913, British suffragist Emmaline Pankhurst was invited to speak in Hartford, CT, by Mrs. Katharine Hepburn, president of the Connecticut Women's Suffrage Association and mother of the future actress. Mrs. Pankhurst traveled to America not to encourage women to fight for the vote ("American women can do that very well for themselves") but to raise money for legal defense costs for her followers who had destroyed and sabotaged property. Pankhurst's Women's Social and Political Union had become a militant force, determined at all costs to win the vote. She expected to be arrested again as soon as she returned to England. She was.

The speech is a brilliant exposition of the double standard that permeated the laws of her country. Pankhurst cites contemporary Russian and Chinese (male) revolutionaries who had to resort to militancy to be heard; Sir Edward Carson, an Ulsterman who demanded his followers spill blood for their cause but who was never arrested, as she had been; the biased and punishing inheritance and divorce laws and the meager salaries that working women earned; the horrific force feeding the government employed when the imprisoned suffragists went on hunger strikes. A hundred years later her speech still resounds: the words of a great warrior in a just cause.

This was a really good reading of the speach given by Emmeline Pankhurst from Britain to the suffregettes in the US to support them.Anne Hancock was a great narrator.I was given this book free for an honest review.

Inspiring- I learned so much!

Would you listen to Freedom or Death again? Why?

I would! As a feminist, this speech sparks a fire of joy and pride and inspires me. It is solidly written and read.

I liked that each point brought forth was completely supported with evidence and reason, and how the comparisons between women and men were drawn. I learned something from this speech, specifically about the Declaration of Ulster. I thought Pankhurst's point on the justifiability (or lack thereof) of bloodshed to bring about change is government is commendable, and how little that notion has changed, as we shed blood today for the same reason.

It must have been so difficult to live in that time and not have been able to represent oneself or choose representation. I can only hope we continue to make progress.

This audiobook was provided to me free in exchange for an honest review via Audiobook Blast.

This was very interesting listening to. It felt like Emmeline Pankhurst was speaking trough Anne Hancock who has narrated this with enthusiasm and power and this makes it really authentic

A Timeless and Important Speech

Emmeline Pankhurst was the leader of the British Suffragette movement, who through her unwavering strength and power helped women gain the right to vote. She was an incredible woman and her speech was not only encouraging but empowering to ALL women.

This audiobook was fantastic and I love listening to powerful, intelligent speeches. I think this is a must listen to for not only women but men as well. It should be in the forefront. It's inspiring and was a great reinforcement to know that through her and women like her, I VOTE. I have the right to vote and my voice be heard. A tremendous wake up call for those who don't bother to get out and vote.

I love the metaphor she used about how you have to be the one to make the most noise to get your reform realized. And also, you can't make an omelette without breaking eggs. Brilliant.

Anne Hancock was one word. WOW. She did an incredibly terrific job re-telling this speech. I felt I could've been listening to the original. She has a new fan. She was absolutely flawless. Highly recommended listening.

Masterful and simply excellent. Anne Hancock delivers this speech with a courage and conviction in her voice that I expect would make Emmaline Pankhurst proud. The narration is superbly done. Men and women of all ages listening to the speech will gain a better understanding of the great injustices against the "weaker sex." This woman, these women, had the strength of body, mind and soul in order to bring about a change in the deeply held male mindset as well as general public opinion throughout a large part of the world; they endured for all women and their struggle to become free citizens of their respective countries gave women the right to vote. If you have a cause, any cause, let the words of Emmaline Pankhurst be your inspiration. Men, if you have women in your life then listen to this for and with them. Women, listen for yourself and be empowered to make change in your life. One might wonder how anyone could speak for over an hour and hold the interest of the audience, well it has been done here. The powerful words of Emmaline Pankhurst break down the barriers of her time with a speech that in many ways could hold true for women in certain countries today.It has been a pleasure to listen to this audiobook which was provided free of charge in return for an unbiased review via Audiobook Blast!”. Thank you.