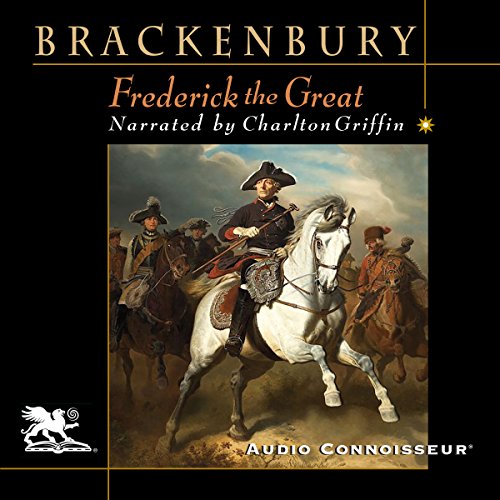 By: Charles Booth Brackenbury
Narrated by: Charlton Griffin
Try for £0.00

Frederick the Great, king of Prussia from 1740 to 1786, was one of the most remarkable men of the 18th century. Born the son of strict disciplinarian Frederick William I in 1712, he was a most precocious and obstinate young man, and until he actually became king, he never exhibited any signs of becoming a military genius. But the young king displayed an amazing aptitude for military life and plunged into war with Austria over the long-disputed province of Silesia.

The next 30 years of his life were consumed in wars against Austria, France, Russia, Sweden, and even England at times. After the Seven Years' War, the Prussian military acquired a formidable reputation across Europe. Esteemed for its efficiency and success in battle, the Prussian army of Frederick became a model emulated by other European powers, most notably by Russia and France, the latter of which quickly applied the lessons of Frederick's military tactics under the direction of Napoleon Bonaparte.

The most remarkable thing about Frederick’s life was his devotion to the arts, literature, and architecture. French alone was spoken at his court. He was a gifted musician, an admirer of Bach, and composed over 100 pieces for flute. His love of philosophy attracted thinkers from all over Europe, including Voltaire. Frederick became the very model of the enlightened despot. He promoted freedom of religion and was more tolerant of freedom of expression than other sovereigns.

When Frederick’s wars were over, he promoted trade and colonization into areas left devastated and depopulated by war. His brilliant organizational abilities bore fruit very quickly, and by the end of Frederick’s life, Prussia had become a very prosperous kingdom.

Listeners are urged to seek online sources for maps of the many battles described in this book.

What listeners say about Frederick the Great

Turgid boring prose, awful narration and learned absolutely nothing about the character of Frederick the Great. Was painful from start to finish

Book not so great

It is a very disappointing book, from beginning to end. It tells the reader almost nothing about Frederick as a person, his interaction with others. Even the chapter on the childhood is disappointing. The rest of the book is a battle description after a battle description. The narrator puts emphases in strange places in the sentences, the drum roll sounds at the beginning of the chapters start grinding very soon. No personal correspondence is explored, no insights from other people. Very disappointed and will be trying the German audible site for a better one. Frederick was great, Booth Brackenberry or Griffin are alas not.

Frederick the Great is a complex subject: any one book will have trouble doing complete justice to his life. This volume however does a creditable job. I especially liked the coverage of his youth. The description of the period in which, as a king, he immersed himself in war, could become hard to follow. I wish that more time had been devoted to his interactions with the great philosophe Voltaire. And, the description of the end of his life could have been more detailed. But overall, a good introduction to this fascinating "philosopher king."

Great story, well read. I found the music that started every chapter distracting and annoying.

Love history, the heavy British accent made an overly wordy narration laborious. If you aren’t completely focused on the British accent and translating it to an American dialect you will miss out on the wonderful story hidden behind the narrator. Was like listening to Shakespeare performed by someone from Louisiana if you are British I imagine.

that though this book was written almost a century and a half ago, the author's insight into the tactics and political sphere of the time are not as alien as would be to an author of today. And as such, are invaluable. It was written at a time when the military tactics of the world were truly being rewriten from the Seven Years War to the Civil War by Germany herself in the Austro-Prussian War.

If you want to learn about Fritz’s military accomplishments in the Seven Years War, this will have you covered. It is not a story of the Enlightenment, however.