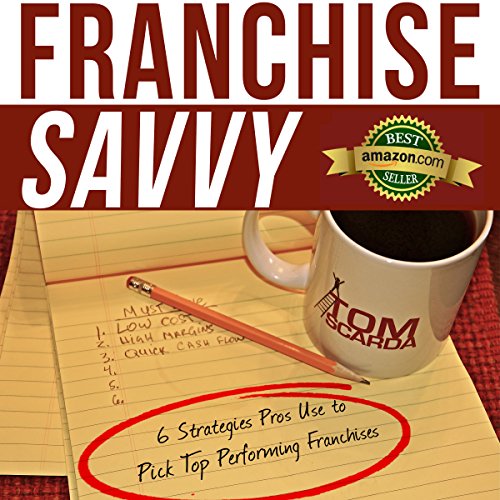 Tom wrote this book for people who are:

1. Tired of not being able to obtain the financial and lifestyle goals they desire 2. Frustrated and cringe at the thought of going to work in the morning 3. Looking for a solid franchise opportunity to build while keeping their job 4. Recently laid off and know job security is an illusion 5. Looking to diversify their investments or income stream

Tom Scarda describes a franchise as a business with training wheels. Perfect for someone who has never owned a business but wants to put their destiny in their own hands by simply following a blueprint that has the kinks worked out. There are more than 3500 hundred-franchise companies in 90 different industries that are franchising their concept in the United States and Canada. Which ones are good? Which ones make money? Which ones give sufficient support to ensure success? Should I look at franchises that coincide with my hobbies? How much does it cost to open a franchise? Why do franchises fail? There are a plethora of questions someone has when considering investing in a franchise. This book answers the top questions someone has and also the answers questions that someone should be asking franchisors before taking out their checkbook to buy a franchise. Tom Scarda, a certified franchise expert, accredited by the International Franchise Association, is someone who successfully did it himself. Tom quit a job, that his family thought was great because it had a pension plan and benefits, to buy a smoothie franchise. He built it into three locations and within five years sold them and semi-retired at the age of 41. If Tom can do it with only government work experience behind him, so can you - with the right franchise.

So which is the right franchise? This book will help anyone understand the pros and cons of franchising and reveal the secrets that pros use to pick a top-performing concept in addition to teaching the listener to spot red flags and avoid the common pitfalls.

20 minutes of advice...and then repeated.

This book started well. Good sound and reading were appreciated, after the 4th chapter things took a turn. The chapters became about the same ideas as chapters 2-4. They we're about a paragrah long and ended with a plug for their web site or service. Repeat this for 5 more chapters and it's time for a refund. Sorry guys. Good try.

Definitely worth a listen.

For those thinking about or new to franchisee life. Great info and an engaging narrator.

This book provided some good questions and insights but.... it is essentially a marketing brochure writ large. Most of it is a series of good questions then a link to Amazon Affiliate links or his website.