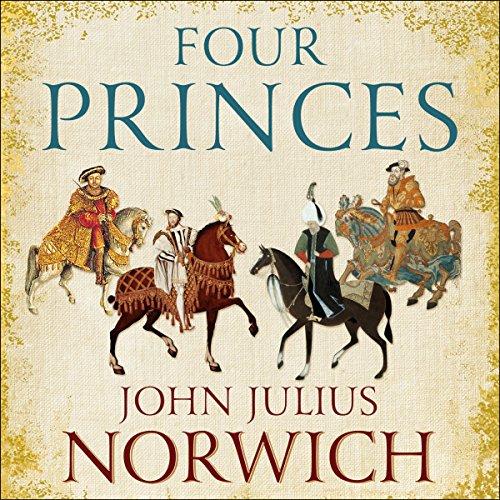 By: John Julius Norwich
Narrated by: Julian Elfer
Try for £0.00

'Never before had the world seen four such giants coexisting. Sometimes friends, more often enemies, always rivals, these four men together held Europe in the hollow of their hands.'

The colourful story of the four very different men who created our modern world: Henry VIII, Francis I of France, Charles V of Spain and Suleiman the Magnificent: popular history at its best from John Julius Norwich.

Four great princes - Henry VIII of England, Francis I of France, Charles V of Spain and Suleiman the Magnificent - were born within a single decade. Each looms large in his country's history, and in this audiobook John Julius Norwich broadens the scope and shows how, against the rich background of the Renaissance and destruction of the Reformation, their wary obsession with one another laid the foundations for modern Europe.

Individually, each man could hardly have been more different ­- from the scandals of Henry's six wives to Charles' monasticism - but together they dominated the world stage. From the Field of the Cloth of Gold, a pageant of jousting, feasting and general carousing so lavish that it nearly bankrupted both France and England, to Suleiman's celebratory pyramid of 2,000 human heads (including those of seven Hungarian bishops) after the battle of Mohács; from Anne Boleyn's six-fingered hand (a potential sign of witchcraft) that had the pious nervously crossing themselves to the real story of the Maltese falcon, Four Princes is history at its vivid, entertaining best.

With a cast list that extends from Leonardo da Vinci to Barbarossa and from Joanna the Mad to le roi grand-nez, John Julius Norwich offers the perfect guide to the most colourful century the world has ever known and brings the past to unforgettable life.

What listeners say about Four Princes

Norwich was enthusiastic about history. He was always modest in claiming to be an amateur, but he always mastered the detail - usually knowing it is the second string characters whose biographies can reveal the most telling anecdotes. His appeal lies in the fact that he was basically continuing Victorian narrative history - focused on kings, princes, and courtiers and the geopolitical moves they made. He writes pen portraits of the main characters and has little interest in institutions or ideology. He is happy to defer to Motley at one point (nearly 150 years old - but a fellow master storyteller), most of the rest of the time he gives no sources at all. Well, good luck to him - you can go elsewhere academic history, social or cultural history or any kind of attempt to find modern parallels or messages. This is history that aims to string together the main events in a way that makes them exciting and vivid. His books sold like hot cakes because his enthusiasm and his knowledge are so infectious.

The narrator is very game with all the foreign languages, though muffs a few things (for example, Angoulême has a hard 'g'). But, I thought he added something to the work and the whole thing was really enjoyable.

Wonderful from start to finish

JJN always writes with such flair and wit. not only is it packed with detail as all his books are but flavoured with witty asides and diverting anecdotes that always make Lord Norwich's work a joy to behold, whether listened to or read.
The narrator is also excellent with a nice melodic voice, which fits the subject well.
basically this is a 10/10 would recommend.

Superb narrative on the many times Francis, Henry VIII, Charles V, and Suleiman the Magnificent crossed paths during such a seismic epoch. I was drawn by how smoothly the narrative flowed and how their lives intersected so much so that changes in their tastes affected the entirety of Europe.