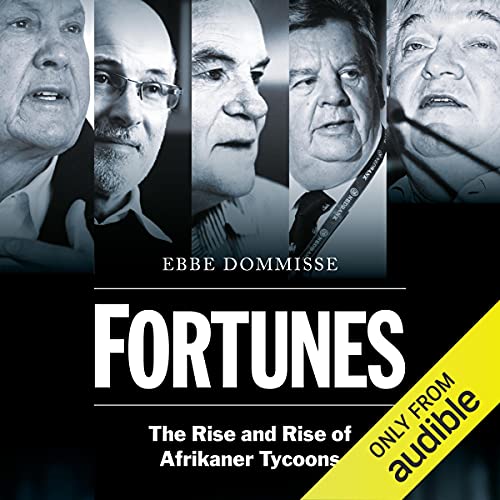 By: Ebbe Dommisse
Narrated by: Adrian Galley
Try for £0.00

A comprehensive work based on personal interviews and insider knowledge - bound to become a classic.

The past three decades have seen a remarkable rise of Afrikaners in business. With Koos Bekker at its helm, media group Naspers began dominating the Johannesburg Stock Exchange and was turned into a global consumer internet group. Johann Rupert strongly extended Richemont’s share internationally in the upper-end market of luxury goods, while Christo Wiese and Whitey Basson at Pepkor and Shoprite became Africa’s largest clothing and food retailers.

Fortunes describes how these and other business leaders, such as Jannie Mouton, Michiel le Roux, Douw Steyn, Roelof Botha, Hendrik du Toit and a number of commercial farmers, built their empires. It looks at their life and business philosophies and what makes them such successful entrepreneurs.

Recent years have also seen the sensational collapse of Steinhoff International, the furniture retailer led by Markus Jooste that destroyed some of these fortunes. While Jooste is the topic of one of the chapters, another looks at the philanthropic projects most of these tycoons are involved in.

What listeners say about Fortunes

The stories and opinions collected by the author are spectacular, and provides deep insight into the Mega Rich in South Africa, and their business understanding.
The Steinhoff references throughout the book are golden nuggets indicating the train of events that led to the company's collapse, and the level of rot of Markus Jooste. Johan Rupert's dry humour and directness was another highlight. Massively recommended.