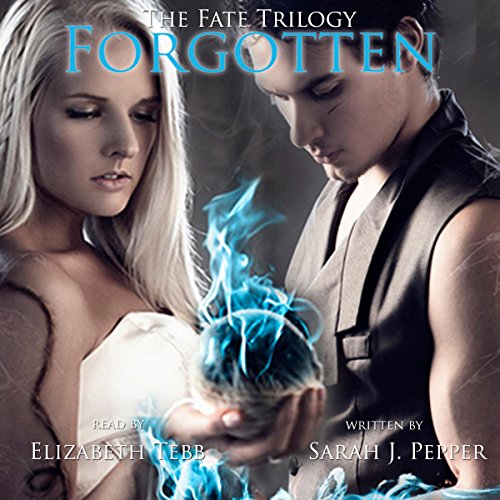 By: Sarah J Pepper
Narrated by: Elizabeth Tebb
Try for £0.00

His perseverance unnerved me, scrutinizing my every move like a twisted guardian angel. Jace waited patiently for me to join him. Like he knew my defiance would crumble under his intense gaze, which was exactly why I avoided him until twilight. He hijacked my dreams and proved to be a different kind of nightmare - unhinged, rebellious, and dangerously mouth-watering.

"Escape from reality, Gwyneth. Sometimes life can be too painful to live in, even for immortals," Jace whispered in my dream. His heat, fervor, and unrelenting confidence resonated around me when he closed the gap between us. His lips hovered above mine, waiting for me to give into him.

Gwyneth's chronicle began long before she witnessed her family being brutally murdered and lost her sight. Living as an orphan, her world is anything but black and white. She sees her vivid future that promises suffering and death. Cursed with these visions, Gwyneth pretends to be like everyone else, until a dangerously charismatic young man walks into her life.

From the moment Jace lays eyes on her, he refuses to believe Gwyneth is normal. He knows information about her past that only a psychopathic stalker could dig up. He reveals her dirty secrets. Unbeknownst details of Gwyneth's former life unfurl. Unsure of what to believe, Gwyneth searches for answers that lead to her inconceivable fate. However, the ancient truth she uncovers is more dangerous than any high school romance she'd bargained for. Gwyneth is dragged into an inevitable battle brewing between immortal Gods and ageless Hunters - both of which have sworn to kill her if deemed necessary.

What listeners say about Forgotten

Reader stopped and started over multiple times and mispronounced numerous words. The story is fine. It is what you'd expect from a teen romance/fantasy novel.

Would you be willing to try another one of Elizabeth Tebb’s performances?