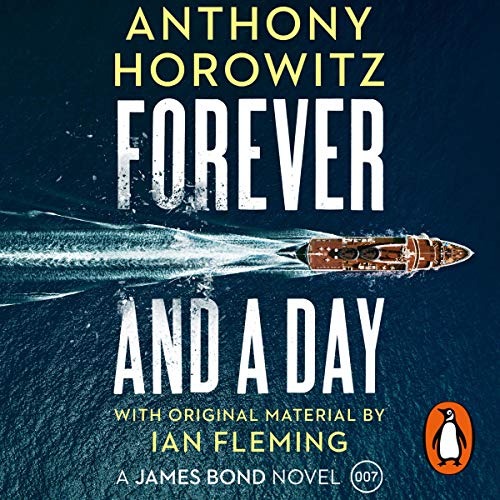 Forever and a Day

M laid down his pipe and stared at it tetchily. 'We have no choice. We're just going to bring forward this other chap you've been preparing. But you didn't tell me his name.'

The sea keeps its secrets. But not this time.

One body. Three bullets. 007 floats in the waters of Marseille, killed by an unknown hand.

It's time for James Bond to earn his licence to kill.

This is the story of the birth of a legend in the brutal underworld of the French Riviera.

What listeners say about Forever and a Day

An Iconic Legend is Born

Horowitz is an author that has taken us on an incredible journey in recent years. He's brought us Moriarty, he's channeled his inner Agatha Christie and even just been himself! He has also of course been the latest author to be trusted with the James Bond franchise. In each case he has shown a great sympathy for the style and substance of the characters and period in which the stories were set. So, he was probably an ideal candidate to deal with the birth of the James Bond 007 legend.

There were once again a lot of traps he could have fallen into which he cleverly skirts around such as upgrading this to modern sensibilities. For example while I have never been a smoker I cannot imagine an early James Bond who wasn't one! Horowitz writes with a similar style and cleverness to Fleming's books while appearing to retain that glorious naivete of the period. To this reader at least it really did feel similar to reading one of Fleming's creations and this is the skill of Horowitz when he takes on these legendary characters.

The story itself is original but to a similar formula. There is a dastardly plot, genuinely evil intent on the part of the villains who behave like classic Bond villains and of course plenty of signature Bond action, investigation and no little mayhem. The girls are of course cool and sexy . . . well what did we expect? In this case I'd say one comes close to stealing the show from Bond . . . handing him one of his classic motifs in the process.

Matthew Goode making his Audible UK debut is highly competent as a narrator and his voicing rounds off a thoroughly polished package. With Forever and a Day Horowitz has depicted a crucial chapter in the Bond story covering the birth of a literary icon and he was clearly the right choice to do it.

Every bit a Bond story

Anthony Horowitz does it again, another great Bond story. Matthew Goode's performance brings it to life. Great characterisations. I really like the way Horowitz sets his Bond stories in the 50's.

I'm not going to say anymore , apart from listen to this is it pure escapism.

Anthony Horowitz has done the Bond genre proud with this very entertaining story. It starts with the death of the original 007, an agent whose 00 designation Bond inherits (at his request). The story is cleverly constructed and well written. Fans of the Ian Fleming originals will be happy with Horowitz's story which, if anything, outclasses Fleming in many ways. A ripping yarn with a grotesque villain, a beautiful woman, plenty of violence (some of which is very graphically described) and, to this reader at least, an unexpected and surprising finale. Mention also must be made of the excellent narration by Matthew Goode who has done an outstanding job. Highly recommended.

A great listen for Bond fans full of action and suspense. A Fantastic performance by Matthew Goode.

Another Bond classic by Horowitz!

I won't go into too much detail as I often do with my reviews. James Bond is a classic character and Horowitz is a very talented writer. Very few writers could do what Horowitz achieves in this novel. He manages to keep the story perfectly in tone with the time period without updating anything and completely immersing you in the narrative.
On top,of that in my humble opinion Bond is perfectly in character for the James Bond of the early Fleming books. This book unlike many others suceeds at maintaining or matching the flair and style of the original Fleming novels. Give this book a read or listen you won't regret it at all. Matthew Goode is an excellent narrator and I hope him and Horowitz will grace Audible again soon.

The closest to a new Fleming as us possible I think. Horowitz manages to capture the style and tone without parodying - it is difficult to write Fleming's Bond in the contemporary era, some of his opinions belong firmly in the 60s, but the author pulls it off without diluting the source unrecognisably.

Matthew Goode is a sublime narrator for this story, certainly a good Bond, excellent characterisation, and compelling narrator.

Everybody likes a good bond novel, with the flair of Ian Fleming and the detail of Tom Clancy, Anthony Horowitz has written a fantastic story and Matthew Goode was an amazing narrator really painted the picture wonderfully, enjoyed from beginning to end.

Such a gripping, funny and fast paced read. Love everything Horowitz writes and this is no exception, couldn't stop listening so well performed.

Really good book. As good as Fleming with some great fan pleasing in-jokes. Listened to it in a day

Goode IS Bond. Story is FANTASTIC

First time I've listened to a James Bond audiobook. First time I've even been near a James Bond book either! This is similar to the newer Bond's - it's real and it's not cheesy. It's brilliantly written and Matthew Goode absolutely NAILS it as James Bond. It just means I can't listen to any other Bond without him as a narrator now!

Anthony Horowitz is a great author

Anthony Horowitz is a great author and in this instance his efforts are complimented my narrator Matthew Goode. He writes in genuine Ian Flemming style and has produced a very enjoyable audio exxperience. I hope he does some more of Ian Flemming's books.

James Bond is back

Nowadays one does not read James Bond's stories for the thrill of the plot. It is rather an exercise of immersion in what used to be adventure and mystery in the 60s . Horowitz does an excellent job to keep up with Ian Fleming's standards : sharp writing style, interesting and engaging (no matter if not always realistic) characters and a pleasant old fashion atmosfere full of charm and wit.
The plot moves fast and Matthew Goode is as good as it gets.
Very, very pleasant reading !!!

Narration by Goode is superbly engaging, the accents and voices, very entertaining. Looking forward to the next one?

I read Horowitz's other James Bond Novel a few years ago and it was really well paced and exciting. This 007 adventure is pretty damn excellent too.