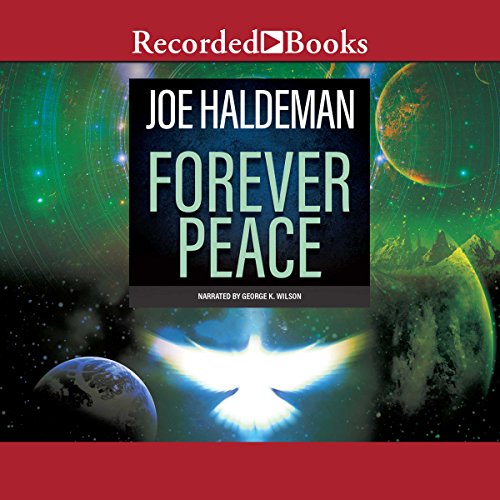 By: Joe Haldeman
Narrated by: George Wilson
Try for £0.00

Drawing on his own war experiences, Vietnam veteran Joe Haldeman creates stunning works of science fiction. Forever Peace is not a sequel to his previous award-winning work, The Forever War, but it deals with similarly provocative issues. When it was published, Forever Peace was chosen as the Best Book of the Year by Publishers Weekly. It also won the coveted Hugo Award.

War in the 21st century is fought by "soldierboys". Remote-controlled mechanical monsters, they are run by human soldiers who hard-wire their brains together to form each unit. Julian is one of these dedicated soldiers, until he inadvertently kills a young boy. Now he struggles to understand how this has changed his mind.

Forever Peace is a riveting portrayal of the effects of collective consciousness, and it offers some tantalizing revelations. Narrator George Wilson's skillful performance weaves together the elements of futuristic technology with the drama of a trained soldier reconciling basic human needs.

"At once a hard science, military, and political thriller, this book presents a thoughtful and hopeful solution to ending war in the 21st century. Essential for sf collections." ( Library Journal)

What listeners say about Forever Peace

If you enjoyed "The Forever War" then I can see no reason why you wouldn't enjoy at least the first half of this book. The second half, although entertaining, just seemed a bit daft. Having said all that, the whole thing was infinitely better than listening to Radio 2 or John Humphrys.

Joe Haldeman, said although this wasn't a direct prequel to The Forever Wars, there's aspects of the story that fit into that universe.

There's three stories interweaving within the book, one of them the military industrial complex and the futility of war, another is a love affair between a couple of different races and ages, and thirdly a threat that could kill us all.

What more do you need from a Thriller!

The reader is fantastic, a voice that is pure Americana with a slightly world weary sardonic tone, that I think references the sense of war weary America that this book portrays.

I have a lot of audio books and I regularly come back to this one, knowing what's going to happen before you listen, but it not mattering as you're so immersed in the books universe, says a lot about the quality of the story and the reader.

Unlike his first book, this one was completely uninteresting stock scifi-action with scarcely a hint of novelty to it.

Lazy in conception and execution

I'm a huge fan of Forever War. Knowing that the two books have nothing in common but the author and the word "forever" in the title, it took me quite a long time to get around to reading Forever Peace. Unlike Forever War, this story simply does not work. The main character is borderline interesting, but the premise of the book is extremely weak and poorly thought out: a universe ending plot device and crazy plan to prevent the destruction of the universe that makes no sense, what-so-ever. There are also seemingly random switches between 1st and 3rd person narrative. Those might work fine enough when reading the text, but wind up being confusing in an audiobook.

I can't believe this book won so many awards - while you can agree or disagree with the point the author is trying to make (nothing new, btw), it simply doesn't work as a story.

Good, but not as good as The Forever War

In terms of sheer writing skill, and the ability to portray the raw tragedy, loneliness, and emptiness of being a soldier, Joe Haldeman is without equal. This book is melancholy, depressing, and despairing. It is not, however, as good as The Forever War, and in fact has no relation to that epochal work.

I'm not sure how this book became 1 of only 3 books to win the "trifecta" of honorary awards. Perhaps good marketing advertising at the time of publication. Anyhow, it comes nowhere near close as good as Gateway nor Rendezvous With Rama. With basically 3 totally separate, and incomparable, plot paths, this was a dull listen. Only the virtual reality military avatar-like control unit plot was interesting, but the far-fetched doomsday scenario, and the very boring personal infidelity melodrama plots totally ruin it. And the reading execution was bad. Bad publishing indeed. Also, the Audible narration was droning. I don't mind so much the story's alternating 1st person and 3rd person narrative, as some have said is annoying, but the actual narrator is obliviously bored. Voice emphasis was spot-on, but it's just purposeless reading at times. I guess fans of hard sci-fi military books MIGHT enjoy it, but it comes off far-fetched, amateur, and cheap to me. Get this; imagine a black cosmologist and experienced virtual reality combat soldier and squad leader, making welfare military wages, that likes the taste of his own penis (I'm serious) and wants to commit suicide because he shot one teenager in an attacking crowd by accident? I'm reading that thinking wtf is going on? Hahaa, this book is laughably stupid at times. If you have depression, I highly recommend staying away from this book. It's like a bad fast-paced Jesus Incident, or bad Orson Scott Card book. I'm requesting a refund right after I post this. Is there a way to petition awards be revoked after recognition? Seriously, it's that bad. Again, I have no idea how it's possible this book can be awarded at all, let alone, in comparison to Rendezvous With Rama or Gateway.

'Walk a mile in their shoes' Syndrome

This book is a spiritual, if not narrative, sequel to Haldeman’s 1975 “Forever War”. Both novels won the Hugo & Nebula, and explore the theme of war’s futility, although from different perspectives and in separate story-worlds. Readers expecting a continuation of Forever War’s interstellar conflict or relativistic time dilation effects, will see that instead this story features a strictly terrestrial struggle between the wealthy nations, fueled by effortless nano-factory produced plenty, and the struggling excluded masses. The earlier novel, written in the immediate post-Vietnam days of an antagonistic welcome for returning veterans, further exaggerated the alienation of the protagonist with a fish-out-of-water situation that placed the character hopelessly out of touch with his own century. Here, in the 1998 novel, one senseless war is supplanted by an invisible one to end all wars, as the protagonist discovers a pacification treatment that involves sharing one of the military’s tightest-held tools with all of humanity to bring individuals together into a community incapable of violence outside of self-defense. Haldeman uses SF technology as vehicle to explore the age-old thought that ‘if we only walked in our enemies shoes for a day’. At the same time, the greatest opponent to this peace movement is one of religious zealots who inexplicably seem to want death and destruction for its own sake. I felt that not enough insight was given to their internal motivation, even when the narrative was told in first person perspective of one these characters. This left them a bit too archetypical and cartoon-evil for me. On the human-scale drama of this story, there is a compelling relationship that is shown conquering the challenges of race, age, military-civilian differences, then ‘jacked’ vs natural minds until it is thoroughly proven to be unshakable. There are also some notable thriller scenes and a number of high-tech asymmetric warfare scenes as well. Absent, sadly, are any aliens or Space Opera tropes or any references to advanced climate change expected over the coming century (CliFi).

Unworthy of its title.

If you liked The Forever War, this is not at all of that caliber. Muddled, improbable, and only occasionally interesting. Meh.

While George Wilson does an amazing job once again narrating the story I was very disappointed by the book itself. Forever War has always been one of my top three favorite books ever, and I was impatient to read forever peace. I am deeply disappointed. The story drags on unnecessarily, bringing the characters into a melodrama soap opera style, with abundance of sexual narrations. Political biases are evident, yet at times made the book seem like a manifesto. When finally back on track, the plot takes a twist which made me very uneasy, and the end is expedited as well. I struggled to finish the book, yet do not recommend it.

a brutally long story, short on new idwas. if anything, we get a good look into the authors perverted mind. I can point to the exact place where the narrator looses interest, but he rallies back to for as strong a finish as possible.

half of a good book

it's not of the quality of the Forever War, which presented a new way of thinking about the fragility of the human body on the modern battlefield and how difficult it is to learn about your enemy during war. the first half of forever peace examines intimacy in combat very well. the second is a somewhat hokey thriller that includes characters that veer towards stereotype.

the narrator has a bizarre tendency to elevate his pitch when performing one of the many latin characters. consequently they all sound like the well known racist caricature of a Mexican a la Speedy Gonzalez.

Relationship to the First Book is Confusing

I'm not sure what the relationship with "Forever War," is. Another view of human and cultural evolution? It is an interesting story, but sometimes the point of view of who was narrating was awkward.

To quote Mr Mackey from South Park, " War is Bad."

I cannot dis a two time Hugo winner. I just expected more.The resolution of our aggresive nature seemed much too simplistic.