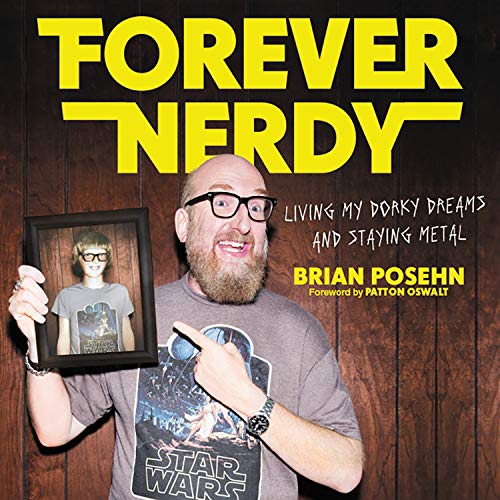 The first memoir by beloved comedian, actor, and writer Brian Posehn, hilariously detailing what it's like to grow up as and remain a nerd, with a foreword by Patton Oswalt.

Brian Posehn is a successful and instantly recognizable comedian, actor, and writer. He also happens to be a giant nerd. That's partly because he's been obsessed with such things as Dungeons and Dragons, comic books, and heavy metal since he was a child; the other part is because he fills out every bit of his six-foot-seven-inch frame. Brian's always felt awkward and like a perpetual outsider, but he found his way through the difficulties of growing up by escaping into the worlds of Star Wars, D and D, and comics and by rocking his face off. He was a nerd long before it was cool (and that didn't help his situation much), but his passions proved time and again to be the safe haven he needed to persevere and thrive in a world in which he was far from comfortable.

Brian, now balls deep in middle age with a wife, child, and thriving career, still feels like an outsider and is as big a nerd as ever. But that's okay, because in his five decades of nerdom, he's discovered the key to happiness is not growing up. You can be a nerd forever and find success that way - because somehow along the way the nerds won.

Forever Nerdy is a celebration of growing up nerdy and different. This isn't Brian's life story, just some bizarre and hilarious stories from his life, along with a captivating look back at nearly 50 years of nerd culture. Being a nerd hasn't always been easy, but somehow this self-hating nerd who suffered from depression was able to land his dream job, get the girl, and learn to fit in. Kind of. See how he did it while managing to remain forever nerdy.

"Forever Nerdy is the only book on Brian Posehn and his curious, eventful, sad, sometimes tragic, defiant, fun, loopy life that you will ever need to read. Throw away all the others on this subject matter and get this one! Joyce had his Ulysses, now Posehn has his Forever Nerdy to engage your eyeballs and wile away your hours, whether you're stuck in Omaha, or in an airport, or on the toilet, or perhaps in a toilet on an airplane over Omaha (a trifecta). Buy it, read it, commit it to memory, and you can be on my team on trivia night!" (Bob Odenkirk of Better Call Saul, Breaking Bad, and Mr. Show)

"Everyone has an origin story. For comedians, they're usually pretty sad, tortured, and depressing. Brian Posehn's is no different, and yet he's so different. Forever Nerdy is a memoir about being brave enough to take your torture and find a way to make it your bliss, and is so fun to read you're gonna wish you took even longer poops." (Sarah Silverman, author of The Bedwetter)

What listeners say about Forever Nerdy

On the fence? Get it!

Brian's life was not at all as expected. What he went through really made him who he is today. I love that he is a open book about his childhood because I was so able to relate, especially as a massive Rush and metal fan. He adores his wife and son and I love hearing him talk about them. It was all around a great book and entertaining.

Brian, your book was so good man. I laughed so hard and then cried. thanks

If you’ve ever felt like you maybe grew up alone and weird, and no one else did. Read this book and dry those nerdy tears. If you’re a metal fan. Horror fan. Comic fan. And most importantly a Brian Posehn fan. You need to have this book in your physical and/or audible library. I bought the hard copy to follow along to the audible narration by the man himself. I can say with complete sincerity that I not only enjoyed every minute of it. But relished in relatable topics such as life without a dad. Being an outcast weirdo growing up. Achieving your dreams. Meeting a dream girl. I could go on, but you probably stopped reading this review by now. This book is instantly and will remain one of my favorite autobiographies. Thanks Posehn.

one of my favorite comedians. love how he narrated the book himself makes it more personable. I also went through some of the same bullying and being a nerd didn't help. my people are strong and it only makes you stronger. this book made me laugh. the way he explains things and descriptions given are hilarious.

May the force be with you

Brian Posehn is great and I really enjoyed hearing him read the book. Great Book

I have been and continue to be a huge fan of Brian’s work in all arenas. I’d highly recommend Nerd Poker and his stand up if you have not yet engaged.

Brian Posehn is the guy from that show/movie you love that's also been in that movie/show your mom loves. Hes a comedian, writer, actor, father and a NERD who turned a childhood full of unique experiences and hobbies into a career doing the things he loves. Listening to this book will make you love your inner nerd and laugh out loud. 🤘🤘🤘

Not Just For Fanboys

Brian Posehn is someone I’ve enjoyed since first seeing him on the sitcom, Just Shoot Me, years and years ago. I immediately dug his goofy voice and awkwardness (two things I understand). Over the years I saw or heard him in various shows and movies, and when I got to see some of his standup on Comedy Central, where I discovered he was a fellow pop culture junky!

So, when I saw he was releasing a book I knew I had to check it out! I’m especially glad he did an audio version, not just to hear him talk (reading it I would’ve heard his voice the whole time), but because I always love when autobiographies are narrated by the authors.

I think this will resonate with anyone who’s obsessive over a particular fandom(s), and I think of you just enjoy funny stories you’ll love it too! ^_^

This is what the Audiobook format was invented for

Audiobooks are convenient but it's rare that I find a book that truly benefits from the audiobook format. This one definitely does. It's like your hanging out doing bong hits and drinking beers with your pal Brian. If you grew up in the 70's/80's and were raised on Star Wars, Planet of the Apes, Evil Dead II and large doses of heavy metal then this book is for you.

I loved how honest Brian was with some pretty embarrassing subjects i.e. bed wetting and girls.

I'm so sorry you broke your back, and I'm glad you seemed to bounce back and learn the obvious from it. We have all done something extremely regrettable while drinking. You were brave enough to share, and I thank you for it.