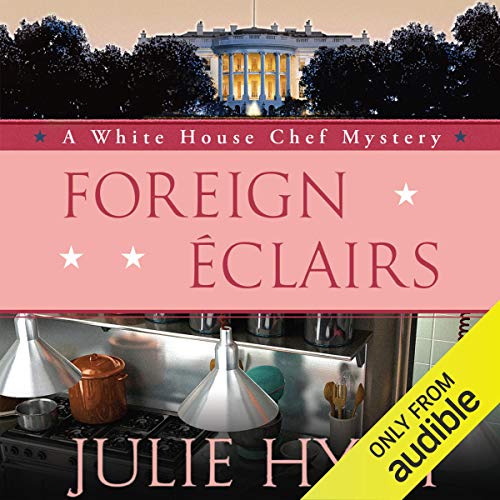 White House executive chef Ollie Paras has served plenty of meals to foreign dignitaries from around the world. But someone is ready to serve her an ice-cold dish of revenge.... Things are about to really heat up for Ollie. News of a bombing and attempted breakout at a federal prison reveals that the brother of a terrorist she helped defeat is back with a vengeance. And after she gets mugged on her way home from work, the Secret Service won't leave her side, fearing that she is now a target. When a White House staff member is murdered, officials rush into action over a possible security breach. It may be time for Ollie to trade in her apron for a bullet-proof vest as she becomes part of a bold strategy to make sure this terrorist gets his just desserts.

This is a fantastic end to a great series. You will not want to stop listening. i love the Whitehouse mysteries. Thank you Julie for the great stories.

The government sequester is over, and White House Executive Chef Olivia “Ollie” Paras is interviewing candidates for a new chef along with Chief Usher Peter Sergeant. Sargeant is chafing without his assistant Margaret. As Ollie heads home that evening, she is mugged at the Metro station awaiting her train. She heads back to the White House and is then escorted home minus the purse taken in the attack.

Ollie’s husband Gav, special agent with the Secret Service, had been out of town at what Ollie believed was the prison outbreak where one of Armistan’s former leaders was being held. Ollie had foiled the plans to free the man in jail a year ago. Through a chain of events, Ollie had stopped the men leading that attempted prison break. The leader who ordered the failed attack had been murdered, and his brother was now demanding justice for his family.

Gav could not confirm his whereabouts, but he returns quickly, and the two make reservations for their favorite table at a nearby restaurant. When they walk to the restaurant, they arrive just after a bomb had exploded, destroying the alcove with their table. Gav’s mentor and special agent Joe Yablonski has taken charge of the scene and whisks the couple away. Yablonski and his team believe that Gav and Ollie’s apartment had been bugged by the people who took Ollie’s purse and overheard their restaurant plans. They believe the Armistanians are out to kill Ollie following her involvement in stopping the attempts a year ago to break their former leader out of jail. They also believe that Gav’s cover has been blown. Ollie and Gav are stunned.

After being escorted to work by the Secret Service, Ollie has a visit from Peter Sargeant. His assistant Margaret had been found dead, clearly tortured and murdered. What White House secrets had she shared? Ollie has been in trouble numerous times before, but this time with vengeance against her directly, she volunteers to participate in the new plan to catch the Armistanians. Planning a visit to Gav’s friends who own a winery a couple hours away, they hope the terrorists take the bait. Elaborate plans take place behind the scenes to prepare for the attempted retaliation and protect Ollie and Gav.

The danger was palpable in this ninth and final entry in the White House chef mysteries; the review of Ollie’s training intense; and Gav’s fear for Ollie evident. Author Julie Hyzy again brings us an absorbing, riveting, and gripping mystery involving both of her main characters. Narrator Eileen Stevens ramped up her efforts to make the suspense tangible. The final conclusion had been alluded to during the book, yet it still deeply distressed me. This book and the entire series are highly recommended.

Would you listen to Foreign Eclairs again? Why?

I have really enjoyed this series of the White House Chef, the recipes, the intrique, the stories! It is well written and narrated. I'm sorry to see this end!

What other book might you compare Foreign Eclairs to and why?

sad ending to an amazing series

so sad at this ending

This was my favorite book in the series. Eileen Stevens is a wonderful narrator. I can't wait to read what happens in the next adventure.

Sorry this is the last book. I would have preferred a different ending. Good action.

Nail biter for sure

Loved it but anxious to know more information. Will there be more coming. I love the suspense but some scenes were unrealistic.

Please don't end this intriguing series. Not this way. Bring all these delightful characters back. Don't take their lives as they know them away.

Farewell to a great series

I have thoroughly enjoyed this series. I hate that it has ended. That being said this last book was well written and true to form. Julie Hyzy ended on a high note.