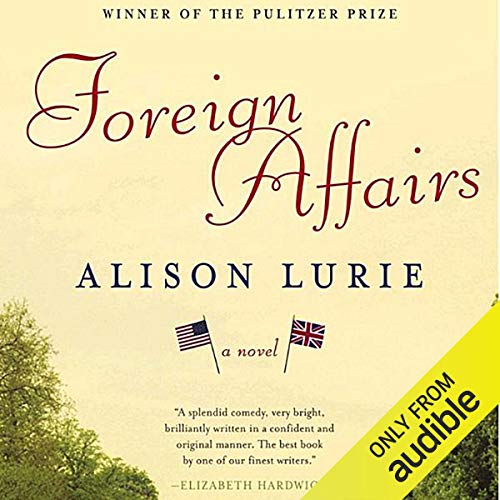 By: Alison Lurie
Narrated by: Jennifer Van Dyck
Try for £0.00

Virginia Miner, a 50-something, unmarried tenured professor, is in London to work on her new book about children's folk rhymes. Despite carrying a U.S. passport, Vinnie feels essentially English and rather looks down on her fellow Americans. But in spite of that, she is drawn into a mortifying and oddly satisfying affair with an Oklahoman tourist who dresses more Bronco Billy than Beau Brummel.

Also in London is Vinnie's colleague, Fred Turner, a handsome, flat broke, newly separated, and thoroughly miserable young man trying to focus on his own research. Instead, he is distracted by a beautiful and unpredictable English actress and the world she belongs to. Both American, both abroad, and both achingly lonely, Vinnie and Fred play out their confused alienation and dizzying romantic liaisons in Alison Lurie's Pulitzer Prize-winning novel. Smartly written, poignant, and witty, Foreign Affairs remains an enduring comic masterpiece.

"A splendid comedy, very bright, brilliantly written in a confident and original manner. The best book by one of our finest writers." (Elizabeth Hardwick)
"If you manage to read only a few good novels a year, make this one of them." ( USA Today)

What listeners say about Foreign Affairs

I read this book and all AL's books when I was teenager and in my 20s - some time ago! Sometimes old favourites don't stand the test of time but this one did. The narration is clipped and sharp, and this slightly put me off at the start as the voice wasn't how imagined the main character at all - but in fact it was perfect. The story is quite slight but the plot isn't the chief reason for reading books like these. The observational style and witty though often moving content is the point. I loved the tension between two national cultures, England and the USA, seen through the eyes of the Americans in London. A very enjoyable listen.

My first Alison Lurie book and it was well worth discovering for its sly wit and interesting characterisations. Fred and Vinnie are academics working on obscure aspects of literature, now on study leave in London from the same American college. Of different generations and with very different personalities, their lives become intertwined in unexpected ways, discovering much about themselves and the world around them. The novel is an interesting take on cultural differences and how people of all kinds play games with themselves and others without realising it. Unfortunately, the audiobook is rather spoilt by the narration, which is wooden and often gets the nuances completely wrong. Particularly irritating are the mispronunciations of UK names and words. While it makes complete sense to have an American narrator for the book, it is based in London and she could have at least made the effort to get place names and other such words correct.

redemption of a mean little person?

What disappointed you about Foreign Affairs?

the way it was read -- very distracting. The intonation almost never matched the expression described in the text -- e.g. what was supposed to be said "in a flat voice" was read breathily; all the "Hmm", "Mmm", "Umm"s etc, sounded exactly the same; accents were questionable; etc. Every time I began to believe in the narrative I was distracted by the non-credibility of the delivery.

What was one of the most memorable moments of Foreign Affairs?

When Chuck decided not to be disappointed about his ancestors.

Would you be willing to try another one of Jennifer Van Dyck’s performances?

The stories about people learning and changing.

It was uncomfortable and tiring to be in the presence of mean little Vinnie Miner for so long.

Would you consider the audio edition of Foreign Affairs to be better than the print version?

Yes, I think this audio book is better than the print version. The delivery is excellent & it's laugh-out-loud funny. It's an incredibly perceptive tale of Anglo-American perceptions, relationships, misunderstanding, acutely observed & somewhat lovingly ridiculed. I can't recommend it highly enough. A wonderful discovery.

Chuck Mumsen was my favourite character. Larger than life, big-hearted, sexy & very funny. The telling of him is funny & in the end .... (no, no spoiler!! ... ) He's just great, I liked him. Really shows up the condescension & pretensions of us (Little) Englanders ...

Which character – as performed by Jennifer Van Dyck – was your favourite?

She performs all characters incredibly well. I think her performance of Vinnie is just brilliant. (Professor Miner.) The performances really come alive. I enjoyed them so much! Very well done & - thank God! NOT TOO FAST! So glad she took her time, & even allowed the proper pauses. She doesn't rush it like so many actors. Chuck's daughter was also brilliantly done. & the swearing schoolgirl!! ....

Being nearly 50 myself, I've been looking for books that have older female protagonists. I'm curious about how others of that age navigate life. This one did feel a bit outdated, being written in the 80's, but it was a fun listen. I had to laugh when she talked about wearing her flowery Laura Ashley dress! Vinnie, the main character, is a bit of a fuss-budget, but she experiences some growth, in that she starts out far more of a snob than she ends up. I thought it was a good expat book. Being an expat myself, I heard a lot of my own thoughts echoed in the characters here. While there are some who question the book's winning a Pulitzer, saying it was just a romance novel, I think they missed a lot of the insights that were explored, the struggles we experience when our identities are challenged and the ways in which we miss having relationships with people because we are so worried about how hanging out with someone who is different from us will affect the ways in which others see us. It reveals that those assumptions we make about others can be so misguided. There's a lot of affectionate poking fun at pretentiousness, and one can't deny that many of us engage in that behavior. And I know I have my own invisible dog :-) I'm glad I'm not the only one. Come along Fido.

I don't remember what attracted me to this title, probably the Pulitzer Prize in 1985. But, now I'm reading all of Alison Lurie's novels and it turns out there is one family that connects the books so it's worth the effort to read them in sequence. I wish I'd realized that because Foreign Affairs is somewhere in the middle, though it works as a stand alone novel as well. Beautifully written.

If you could sum up Foreign Affairs in three words, what would they be?

What was one of the most memorable moments of Foreign Affairs?

When one character had been posing as two.

Who was the most memorable character of Foreign Affairs and why?

Yes- I am submitting this review only because it,s important that your narrators pronounce locations, people,s names etc. properly. In the age of the Internet , it is inexcusable, it would take two minutes to find out how the composer Purcell is said and Muskogee as in the turnpike. Very unprofessional and downright lazy!

Lots of fun lots of insights

Loved this! Terrific protagonist who is witty & wicked. Set in modern day London. Love and ambition

The wit and humor of this book was a great surprise to me. The characters are beautifully drawn and the story is very satisfying. I found myself laughing out loud at a phrase or description.
Ms. Van Dyck does a masterful job of rendering the people and the style of this prize winning novel.

So happy to have discovered this novel. Currently working my way through all of the a Pulitzer novels. Reminds me of Accidental Tourist by Anne Tyler with a little mix of Less by Andrew Sean Greer.

The vocal performance by Jennifer Van Dyck was thoughtful to the dialects and felt true to character.

a unique story of 2 American academics in London

Foreign Affairs by Alison Lurie is the story of two American academics living and studying in the UK. Virgina (called Vinnie) is a middle aged single woman who specializes in American and British nursery rhymes. She is an admitted Anglophile and looking forward to six months on the island. Fred is a 28 year old lecturer. Very handsome and recently separated from his wife, he is lonely and depressed. Both find love interests: a big cowboy from Oklahoma for Vinnie and a titled and entitled actress for Fred.

This is the story of struggle. Vinnie wants to hide her lover from her British friends. She is embarrassed by him, but finds her desire growing. And Fred wants more attention from his lover, because he is used to women throwing themselves at him. Both find themselves in sweet, funny, new situations that surprise them and help them grow. Lurie does a good job showing all the complexities of relationships, but this is not a romance novel. It is an exploration of much more: how do we define ourselves, how do we grow and change, and how do we work together with others to have valuable, rewarding relationships.

The ending was unexpected, and for me that is always a good thing. I like books best when they do not go with what is predictable.

Not what I'd imagined, it had a few curve balls. I enjoyed it, want to read more by this author.

Boring and pseudo clever. One of the worst ever and a total waste of time.