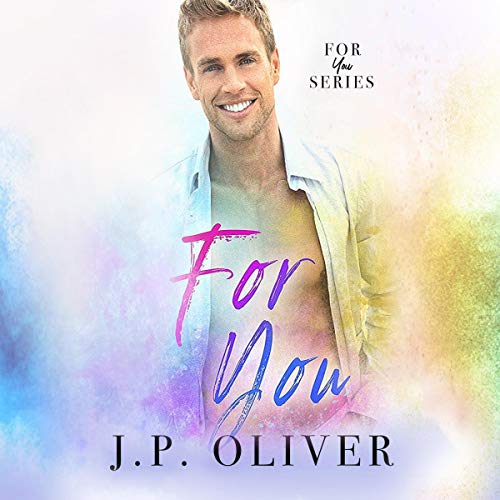 Tyson Rowe knows that he only has one chance - so when his abusive boyfriend leaves his hospital room, Ty slips out the door before Mr. Wrong can come back and hurt him again. He’s desperate to make it back to his hometown, knowing that even though the last few years have been rough, he has allies in his brother and his old friends that will see him safe.

“Losing him once damn near killed me. Losing him again...that’s not an option.”

Eli Mack has been in love with Ty ever since he can remember - but when they lose touch after college, Eli isn’t sure that he’ll ever see Ty again. Finding Ty hurt and scared is his worst nightmare come to life - but Eli’s spent the last ten years building his reputation as a detective with Harlan PD, honing his skills as a protector of the people. And keeping Ty safe? Has just become his number one priority.

They build them big in the small town of Harlan, Colorado - where the winters are beautiful and the mountain men are gorgeous. Listen along as we join them in Harlan, where the pain of the past drips away as these sexy, rugged mountain men find their true loves and embrace a lifestyle of happily ever afters.

Get Made For You and the other 6 audiobooks in the wonderful and complete For You series bundle!

What listeners say about For You

There was so many repeating sentences and even an entire chapter was repeated but the worst of it was the first story wasnt even finished it skipped 4 chapters and went streight to the epilogue right when something interesting happened, I had to get the actual first book to actually see how it ended

First book of the bundle is missing a chapter!!

Whom ever edited the first book needs to be fired. A full chapter was repeated and the pivotal chapter was missing. Tons of easily removed errors were left in as well. Am not sure I will keep listening beyond the second book if this is not addressed.

Edit: The rest of the book was much better. The editing issues were non existent untill the last book where there were a couple of missed repetitions.

All 7 books are a good listen. Hats off to the author and to the narrator [Guillaume Dubois] for Books 2 thru 7.

The only negative is Book 1 - Made for You [Narrated by: Max Christian]. The book had less than thrilling narration style punctuated with a GLARING glitch where the last 1 (or 2?) chapters are altogether missing! Despite raising the issue w/Audible, nothing has been done to correct the missing chapter(s). Please avoid this terrible first impression of the book series after listening to Book 1. Books 2-7 are well done and worth the listen.

Let's hope that JP Oliver and the Audible team can fix Book 1 ...although Book 1 narration is a sunk cost, it would be great to have Guillaume Dubois narrate in a re-recording of Book 1.

Too Many Editing Errors

Repeat sentences, Duplicate Chapters, Missing Chapters. Only listened through the first book until I figured out the last chapter before the epilogue was missing.

Spoiler: MC1 was kidnapped and the next scene they were getting engaged.

I will continue with the kindle book.

The hurt comfort ones were hard to hear at times, but the author dealt with issues well and each git their heas they deserved. This series made me melt and broke me at times. The men had challenges and baggage they met and overcame. I admired their strength and integrity. I enjoyed each book and highly recommend this set. I voluntarily listened to a free copy of this and am giving an honest review. The narrators did an excellent job bringing the characters and story to life.

I love series and really love when they are bundled because regardless if they can be read/listened to stand alone I always like to go in order and this series really they can be done on their own. Each installment is pretty sadly heartbreaking but also very sweet and Dubois does a pretty good job narrating the series there are some little flubs here and there but overall it was a long but enjoyable listen.

I have loved these books but the end of book one is missing A Lot. It goes from a kidnapping to happy ever after?!

This was a great bundle. Always a great writer and narrator. Always love an HEA and it’s always delivered with some steamy scenes.

Entertaining collection of stories based in the same town. Each book is about a different couple.

Made for You [Narrated by: Max Christian]: Enjoyed it but has some editing issues which kind of killed it for me. The story addresses the important issue of domestic abuse. Max Christian did a reasonable job on the narration - there were a couple of times I couldn't tell which character was speaking and the MC's sounded younger that I would have expected but it's an acceptable narration.

Try for You [Narrated by: Guillaume Dubois]: Entertaining 'opposites attract' story of a playboy who finds his "one" in his not out work partner. Story flowed along nicely with good pacing and entertaining characters. Guillaume Dubois did a great job bringing life and emotion to the characters.

All for You [Narrated by: Guillaume Dubois]: I enjoyed the story, it has good pace and the characters were likeable and interesting. I generally enjoy Guillaume Dubois as a narrator, but I struggled with the narration on this one (sorry!). It didn't engage me at all, felt inconsistent, the emotions/reactions were off in some places and Jay's character felt too bright/perky and feminine at times (given his back story).

Here for You [Narrated by: Guillaume Dubois]: Nice pace, engaging characters and a wonderfully written story bringing together two men who learn, love and trust help to heal. Guillaume Dubois did a great job bringing Here for You to life. I had no problem distinguishing characters or feeling the emotions of the story, he captures Becks innocence and Jamie's caring nature delightfully.

Wilde For You [Narrated by: Guillaume Dubois]: Childhood bully to lovers. Nice pace, interesting characters and a story of self discovery. Reasonable job with the narration - there aren't huge vocal differences between the two MC's voices, it's more the differences in their personalities that differentiate the two, but overall I enjoyed it and would listen to it again.

Return For You [Narrated by: Guillaume Dubois]: Well developed characters, good pace, and a journey of finding truth and forgiveness for two men given a second chance at finding love. I enjoyed the narration and the characters were bought to life.

Strong For You [Narrated by: Guillaume Dubois]: Well written characters, good pace, story line is probably along the heavier of the series, dealing with loss, grief and healing. This story has all the emotions and was a nice way to tie up the series. I enjoyed Guillaume Dubois narration, believable inflections bought life and emotion to the characters adding to the overall story.

I almost made it to the end of book 1 and discovered at least a whole chapter missing. The edits were not great either. Sometimes a sentence was repeated sometimes a whole paragraph. Too bad too because it was an interesting story.