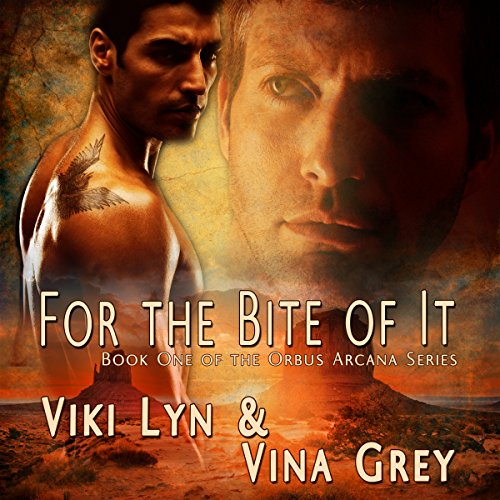 For The Bite Of It

A vampire, a cupcake, plus one sexy cop, is a recipe for trouble.

Vincent Kamateros is an exiled vampire making a routine living as the owner of a cupcake bakery in Arizona. Until a car with a dead driver crashes through the wall of his shop, bringing after it All-American closeted cop, John Reeder. Smitten the instant he sees John, but bound to silence by the Vampire High Council, he can never reveal his true self to John.

John Reeder can't control his attraction to the sexy Italian baker. But as addictive as the sex is, John can't overcome his fear of rejection for being gay, and open his heart to a man with so many secrets.

What listeners say about For The Bite Of It

I'm hooked! Well worth a credit!

Relationships are tricky, I loved the play of words between the main characters. I can't wait for book two. Thanks

Do u know the feeling you got when you went to se "lord of the rings: the fellowship of the ring" and was left with the feeling - that is not a movie -only the intro! Well this is kind of like that - promising story but Nothing gets resolved and it ends very abruptly - it actually was so abrupt that it was several seconds before i could comprehend "i hope u have enjoyed this audiobook" wasnt a part of the story. The narrator kind of says it without pausing first to signal the end. Other than that he is a good narrator exept (i dont know if its him or the authors) a couple of times where he says the name of the wrong MC in a couple of places. If i had to start over i would definitely wait for the rest of the story before i started listening. But i would absolutely buy it, because it has the potential of becoming a very interesting series.

This was a nice start to this series. I enjoyed it. I'm new to these authors and looked forward to listening to more of there books. The narration, and narrator did a wonder job bringing these characters to life. The only little complaint I have is, that in the beginning of the story, Vinnie's voice and character started out strong then went to more of an omega traits, letting John seems more of the dominant one. I would have preferred them, if not being both, having the assertive manner, then I feel it should have continued being Vinne. Being who he really is, and where he comes from. That being said, this will not deter me from listening and following this series. I recommend this book.

Not what was expected

I listened to the whole book, but man, I couldn't do it again. There wasn't enough interest to look for the second book, much less keep it in my library,
So if you like a short story, with a plain narrative, and a hot vampire more power to you

I think this is an underappreciated series/audiobook that deserves some more attention. I read/listened to this originally last year and re-listened this year because it’s just so good!

This is a GFY/OFY with the very staid and stoic cop, John Reeder, finding himself inexplicably drawn to the enigmatic Vincent. Not only is Vincent potentially involved in the crime John is investigating, he’s a guy! He’s also got strange friends and is clearly hiding a lot of secrets – ie he’s a vampire! So we get John trying to deny himself his attraction to Vincent on at least three fronts. John’s family is very conservative as well, save for his sister, and he worries about their response to his newfound sexuality.

As if that weren’t enough, Vincent’s family is not welcoming at all and brining a human home is a no-no.

I really loved the emotion in this story. The mystery does monopolize this first book, but the emotions between John and Vincent are building and it’s a slow burn to an intense passion that gets set up for book two. So while book two remains my favorite of the pair, book one is no slouch. The writing is excellent, the character development superb and the physical tension intense. Beware that we don’t get all the secrets revealed ‘til book two, but the wait is worth it! (This is the revised addition which I understand “fixes” a lot of things the original missed.)


Chip Wood did an excellent job with this narration. Not perfect, but really good. I love his interpretation of John, flat and cop-like at times, but emotional at others. He does a good job with the Italian and the sweet endearments. He was a bit flat when not doing the dialog, but that’s a small complaint. It's always clear who's speaking and even the women are handled well. This was very easy to listen to and a great way to enjoy this story.