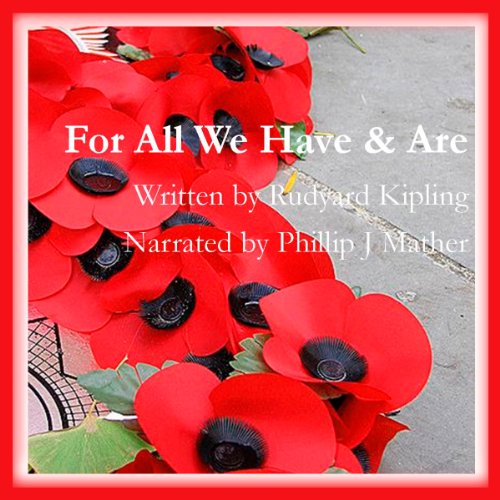 For All We Have and Are

For All We Have and Are

The narrator pledges to donate 50% of his proceeds to The Royal British Legion Poppy Day Appeal - please support. Written in 1914 by Rudyard Kipling, "For All We Have and Are" exhorts the British people to rally together with courage and strength in the coming desperate struggles.

What listeners say about For All We Have and Are

The Hun Is At The Gate!

Yes, for the following reasons:

1. It is an important historical poem, the source, I believe, of the line "The Hun is at the gate!".

2. It is a great example of a patriotic war poem, one used, no doubt, to instill a greater sense of obligation and love of country in the heart of men. It was written at the beginning of the Great War, when the ultimate cost of this war was unimaginable.

3. The rhyming in this poem is superb. For instance, these lines are from the poem:

Once more we hear the word
That sickened earth of old: --
"No law except the Sword
Unsheathed and uncontrolled."

In these four lines Kipling shows how war is chaotic, without rules except those of the sword, that it is a struggle of life and death, especially when your foe is cruel and brutal. It is with a clear eye that Kipling urges his countrymen to battle. He views the war as a fight for survival.

4. The narration was superb. Mr. Mather's voice was described to me as quintessentially English, and it shows in this reading. I can imagine an Englishmen in 1914 sounding just like him.

What was one of the most memorable moments of For All We Have and Are?

The line "The Hun Is At The Gate!"

As this is a poem, there are no scenes.

The outrage, both moral and dread-filled, articulated in this poem are very moving.