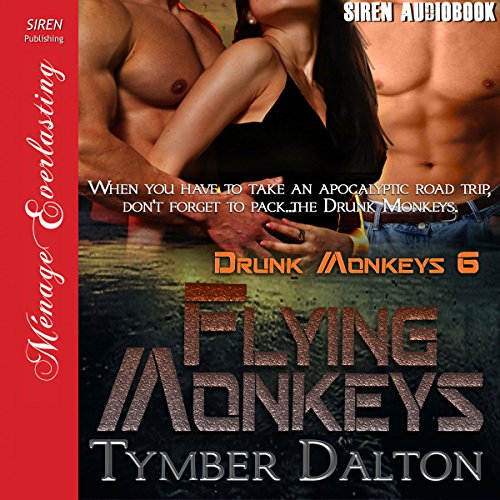 By: Tymber Dalton
Narrated by: Audrey Lusk
Try for £0.00

When you have to take an apocalyptic road trip, don't forget to pack...the Drunk Monkeys.

Capt. Kyong Tran is an orphaned pilot stuck in limbo at a base outside of Seattle, with a plane and no crew. Their presumed deaths during LA's fall weigh heavily on her conscience, as does the mysterious death of her beloved brother.

Despite initial missteps, Kilo and Foxtrot fall hard for the gorgeous, feisty pilot. The unit needs her - and her plane - to move the scientists and their precious research to a hideout in Florida. Meanwhile, they're still scouring Seattle for a Kite-infected woman who might hold the key to a vaccine.

With local violence on the rise, Kyong has little time to train three of the men to complete her crew. No easy feat when she might be falling for Kilo and Foxtrot. Can she turn three Drunk Monkeys into flying monkeys in time for them to continue their quest to save the world?

The books in this series are best listened to in order:

What listeners say about Flying Monkeys